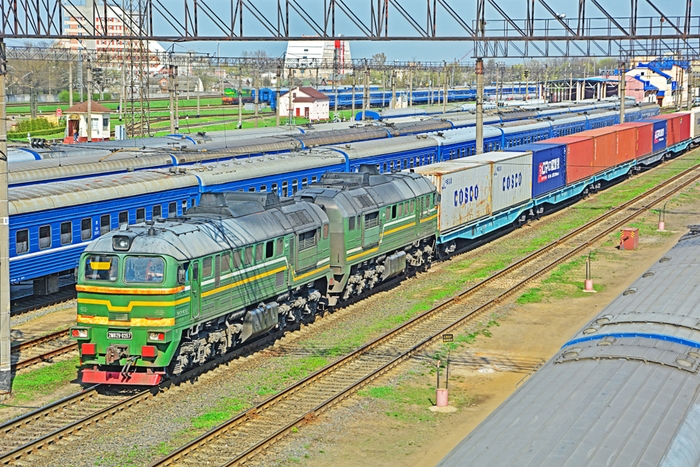 A loaded train from China arrives in the Belarus town of Brest. Volume is growing and transit time is shortening on the overland rail routes. Photo credit: Shutterstock.com.

DHL Global Forwarding says it has cut transit times on its China-North Europe rail service from 17 to 12 days and is planning to consistently offer the new express service to shippers on the route.

The forwarder said the time savings of almost 30 percent were achieved on two trains operated in October from the inland Chinese city of Xi’an to the German logistics hub of Neuss across the Rhine River from Dusseldorf.

“The achieved transit time from rail terminal to rail terminal was 11.9 days and 12.22 days. The substantial cut was on the European stretch,” said Thomas Kowitzki, head of China rail and multimodal, Europe, for DHL Global Forwarding.

The total transit time savings on the express service were gained by travelling through the northern Mamonovo-Braniewo railway border between Russia and Poland, as opposed to the crowded crossing at Małaszewicze in eastern Poland near the border with Belarus.

“It is the plan to consistently achieve 12 days and even improve further over the next trains,” Kowitzki told JOC.com.

However, advertised transit times are a point of contention among shippers that prefer to operate on a factory-to-distribution-center (DC) basis. A Europe-based retailer told JOC.com recently that although forwarders were offering him transit times of 18 days or less from cities in China to North Europe hubs, the time from factory to his distribution center was usually closer to 24 days.

According to DHL, Xi’an in 2018 saw exports increase 29 percent year over year, with high-quality production capabilities in pillar industries such as machinery, electronics, bio-pharmaceuticals, and automobile manufacturing. The rising volume has been recorded across the China-Europe rail network, with concerns that declining Chinese subsidies would ramp up rates and hurt traffic so far proving unfounded.

Strong growth in container volumes this year has instead led to a dramatic fall in the cost of shipping containers from China to Central Asia and Europe, with rates down by almost 70 percent since 2010.

Elena Yusupova, business development director at Kazakhstan-based freight forwarder Soyuztranslink (STL), told JOC.com the average price to transport a 40-ft.-high cube container from China to Poland or Germany is now about $4,000 with a transit time of 15 to 18 days. That compares with about $9,000 to ship the same container from Shanghai to Warsaw in 2010, according to a United Nations comparative study on Europe-Asian transport links.

The new rail service takes an approximately 5,840-mile route through Kazakhstan, Russia, Belarus, and Lithuania to Kaliningrad Oblast, a part of the Russian Federation on the south coast of the Baltic Sea, before entering the European Union via the Mamonovo-Braniewo crossing. The final stretch of the route crosses Poland into Germany to the port city of Hamburg, and on to Neuss.

Traversing numerous countries, the fastest rail service between China and Germany was created with the support of China Railway, Belintertrans, RTSB GmbH, and UTLC-Eurasian Rail Alliance.

Shippers using the service also gain access to real-time visibility, giving them the ability to track their cargo every step of the way. “Each container has a GPS device and the GPS data is transferred to the iSee platform to trace the full journey from pickup to delivery,” Kowitzki said.

Carsten Pottharst, managing director of railway operator InterRail Europe, said China-Europe container rail volumes were expected to rise ahead of the peak season at the end of the year, but he did not expect the heavy congestion seen last year to be repeated in 2019. That is partly due to a Chinese law banning empty containers from the rail network and the expectation that container volumes could be lower, he told JOC.com.

InterRail, a rail specialist in Europe, Russia, Central Asia, and China, recently expanded its services with a block train connection from Changsha in central China to Małaszewicze, and Duisburg and Hamburg in Germany.

Maersk Line has said it plans to double the volume of containers moved by dedicated freight trains from China to Europe this year, utilizing three new routes to avoid the potential choke point at Małaszewicze.