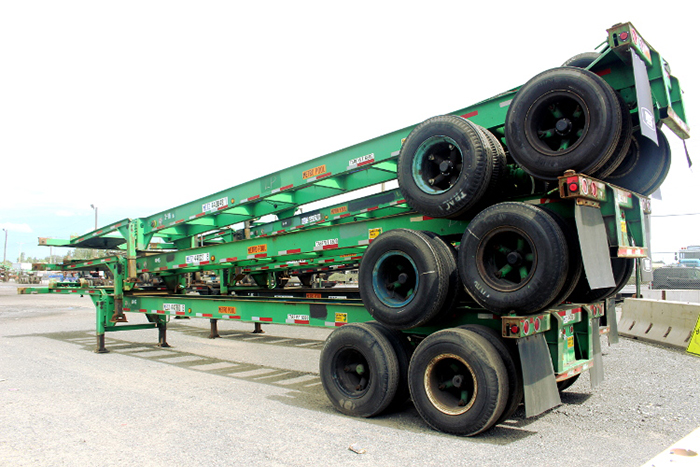 The situation in Chicago persists, but TRAC Intermodal has been able to inject enough chassis to clear congestion in West Memphis. Photo credit: Hugh R. Morley.

Frustrated shippers are finally getting their cargo delivered after delays in Union Pacific Railroad’s Marion terminal in West Memphis, following a chassis shortage that caused containers to idle for weeks.

Beneficial cargo owners (BCOs) had no information on when their containers would be released while demurrage charges accrued into the thousands. TRAC Intermodal says chassis are now available for grounded containers. The congestion is subsiding, according to draymen and logistics providers, but not without leaving sore feelings behind.

The problem began as containers imported into Los Angeles and Long Beach made their way inland to Chicago and Memphis. The impetus was front-loading of cargo in December to avoid tariffs rising to 25 percent. The Trump administration extended the deadline until March 1, but many containers were already on the seas. When cargo reached inland rail terminals, BCOs and truckers discovered there weren’t enough chassis to move the volume.

The situation in Chicago persists, but TRAC Intermodal has been able to inject enough chassis to clear congestion in West Memphis.

“Given the significant spike in volume related to advance tariff shipments, TRAC Intermodal has been able to increase our fleet to meet both normal and tariff-related volumes,” TRAC said in a statement after JOC.com’s Jan. 24 story was published. “We still see a large amount of tariff-related cargo in the pipeline. In an effort to prevent any service interruptions, we continue to push [out of service] counts down, reposition equipment from any surplus location, and work proactively with all stakeholders to effectively utilize equipment off the street.”

Neely Mallory, president of Mallory Alexander International Logistics, told JOC.com that as of this morning, only one of his containers remained in the terminal. The others were made available late yesterday.

Intermodal Cartage Co. president Joel Henry said all his containers were placed on wheels in the afternoon and overnight and ready this morning.

Like Mallory Alexander, Intermodal Cartage had boxes on the terminal for up to three weeks without a resolution. Each day, UP charged $100 in demurrage even though terminal staff rejected pleas from truckers to use their own chassis.

Now that chassis are available, all the grounded containers need to be mounted. Back office staff need to notify customers and arrange for payment of demurrage before releasing the box. Terminal staff must do all of this while also handling new inbound trains and loading outbound trains.

As TRAC noted, there are no signs that the flipside of the front-loading is here. Eventually, front-loading will cause imports to plunge but it is unknown when. Until then, BCOs should anticipate delays popping up without notice.