Union Pacific Railroad is a U.S. Class I railroad owned by Union Pacific Corporation operating 31,800 route miles of track and covering 23 states in the western two-thirds of the United States. The railroad operates from all major U.S. West Coast and Gulf Coast ports to eastern gateways, connects with Canada's rail systems and is the only railroad serving all six major Mexico gateways. 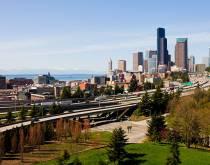 15 Oct 2021
A flood of imports into the Pacific Northwest is boosting spot truckload rates out of Seattle as shippers facing delays and intermodal container shortages seek new routes for freight moving inland.
MORE »

UP metering domestic intermodal out of Chicago, Memphis
27 Sep 2021
Union Pacific Railroad is limiting how many domestic containers it will take out of Chicago, Kansas City, and Memphis to the West Coast to address terminal congestion in its intermodal network.

UP shippers to pay more in Los Angeles, Dallas, and Houston
09 Sep 2021
While container dwell may be up, intermodal volume on the UP network — domestic and international combined — is down 4.6 percent since July 1 from a year ago, according to the Association of American Railroads.

UP raises California surcharges to $5,000 for second straight year
29 Jul 2021
Union Pacific Railroad has raised domestic intermodal surcharges for a fourth time in 2021 with a $5,000 per container fee on excess contract loads for low-volume shippers in California.

UP ramping up West Coast service to Chicago
26 Jul 2021
Union Pacific has begun a controlled restoration of train service from West Coast ports to the Chicago metropolitan area, hoping a fresh restart will restore terminal fluidity for international intermodal customers.

Intermodal congestion to persist through 2021: CSX, UP
22 Jul 2021
CSX and Union Pacific are working hard to restore fluidity on intermodal networks, but both companies said that issues may persist through the end of the year.

BNSF metering space on LA-Chicago intermodal trains
19 Jul 2021
BNSF Railway is rationing the number of ocean containers it will move between Southern California and Logistics Park Chicago for two weeks in an effort to relieve mounting congestion caused by a flood of imports to the Midwest.

UP suspending USWC–Chicago hub services to clear Global IV boxes
15 Jul 2021
Union Pacific’s emergency measure is meant to help move a stack of containers at its Global IV terminal outside of Chicago where an estimated 2,000–3,000 containers sit without chassis.

Huge demurrage bill for BCO highlights Chicago rail meltdown
24 Jun 2021
The plight of one BCO on the hook for huge storage fees is familiar to fellow importers struggling to access thousands of containers at Union Pacific Railroad’s Global IV terminal in Joliet, Illinois.

Midwest marine chassis shortage worse than two months ago: TRAC
18 Jun 2021
Chassis providers are struggling to provide equipment for ocean containers in the US Midwest and Pacific Northwest as shippers hold onto chassis excessively even more frequently than earlier this year, according to importers and TRAC Intermodal.

BNSF, UP battling growing congestion pressures in Chicago
03 Jun 2021
BNSF Railway and Union Pacific Railroad are looking for creative solutions to increase space to store containers in their Chicago terminals amid another spike in inland intermodal volume.

Union Pacific again raising intermodal surcharges in California
02 Jun 2021
Union Pacific has raised surcharges out of California for a second time in 2021, a sign it is concerned about having enough rail-owned 53-foot containers to supply core contract customers through the upcoming peak season.

Post-storm intermodal congestion in Dallas could last weeks longer
08 Mar 2021
A chassis shortage has slowed the supply chain since storms hit Texas nearly three weeks ago, and it could be another couple weeks before cargo slows return to normal.