Norfolk Southern Railway is a U.S. Class I railroad owned by Norfolk Southern Corporation operating 20,000 route miles of track in 22 states and the District of Columbia. The railroad provides service to every major Eastern seaport, 10 river ports and nine lake ports, and it has an extensive intermodal network.

The Norfolk, Virginia-based railroad was formed in 1982 with the creation of the Norfolk Southern Corporation, which brought together Norfolk & Western Railway and Southern Railway, but has predecessors dating as far back as 1827. 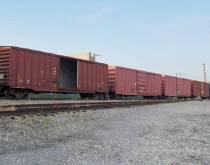 07 Oct 2021
Norfolk Southern Railway is experimenting with less-than-carload service to take loads traditionally moved on LTL trucks on boxcars attached to intermodal trains, which has received praise from a top federal official.
MORE »

Norfolk Southern to reopen Louisville depot for ocean freight
01 Oct 2021
Norfolk Southern will reopen a closed intermodal terminal in Kentucky in order to handle high volumes of ocean containers coming into the Port of Virginia.

NS unveils incentive for easing Chicago, KC congestion
02 Aug 2021
Norfolk Southern is rolling out an incentive program to reward dual moves at two of its busiest intermodal ramps at a time of heavy demand and high volumes.

NS targets end of August to complete chassis repairs
28 Jul 2021
Norfolk Southern Railway anticipates domestic intermodal service to return to normal by Labor Day with repairs on 75 percent of recalled chassis completed in August and an influx of leased chassis into the network in September.

New Georgia inland port targets industrial, poultry shippers
01 Jul 2021
With the award of a $46.8 million federal grant, the Georgia Ports Authority can begin construction on a new inland port in Gainesville, Georgia, that will provide a direct intermodal connection to the port of Savannah when it opens in 2024.

US railroads tightening free time at inland terminals
01 Jun 2021
BNSF will adjust its free time calculations on June 7, tightening the window for shippers to pick up containers that are made available after 5:00 p.m., just two weeks after Norfolk Southern slashed its free time clock.

BNSF again rations space in Los Angeles, Chicago
16 Dec 2020
BNSF Railway is limiting the amount of containers its partners can bring into a terminal in Southern California and on certain Chicago lanes due to volumes that usually tail off after Thanksgiving but have stayed elevated this year.

NS shuts ingating at Chicago 63rd Street yard
14 Dec 2020
Norfolk Southern has shut the gates on containers and trailers entering its 63rd Street terminal in Chicago to five Northeast locations due to a crush of volume, likely sending the loads to full truckload.

NS focusing on intermodal efficiencies rather than chasing freight
29 Apr 2020
Norfolk Southern Railway insists that no matter how far truck rates fall, it will not chase the market down by providing unsustainable rates to shippers, but rather focus on innovative ideas such as mixed trains.