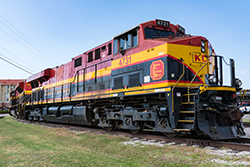 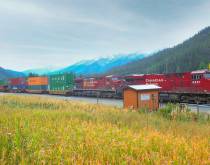 15 Sep 2021
Canadian National has bowed out of its pursuit of Kansas City Southern, two weeks after US regulators threw up a major roadblock to a proposed deal, clearing the way for Canadian Pacific to apply for regulatory approval for its deal with the US-Mexico railroad.
MORE »

CP gives KCS ultimatum on acquisition offer
01 Sep 2021
Canadian Pacific CEO Keith Creel, in a new hardline stance, said his company has been patient long enough with Kansas City Southern and will walk away on Sept. 13 unless it has a deal in place.

Shippers urge regulator not to rush CP-KCS merger review
26 Mar 2021
North American shippers are cautiously optimistic about the potential benefits of a Canadian Pacific-Kansas City Southern merger, but urge the Surface Transportation Board to fully investigate the transaction rather than rush through the approval process.

A merged CP-KCS would offer new cross-border intermodal growth ramp
25 Mar 2021
Canadian Pacific believes there will be intermodal growth opportunities if a merger with Kansas City Southern is approved, but there are challenges to overcome to get shippers to use the new available lanes between Mexico, the US Midwest, and Eastern Canada.

Rail blockade busting lifts Mexican freight industry hopes
11 Mar 2020
The Mexican National Guard has ended a protestor blockade that halted trains on a Ferrosur rail line in southern Mexico, one of two incidents in which the federal security force helped free rail lines blocked by protestors in the last week.

New Veracruz rail link to boost port competition, service
06 Mar 2020
By laying the groundwork for increased competition between Kansas City Southern of Mexico (KCSM), which has no direct rail access to Veracruz at present, and Ferrosur, which does, the new two-rail link is positioned to drive not only service improvements, but volume growth.

Texas inland port to offer rail link to Mexican manufacturers
19 Feb 2020
The developer of a Texas industrial park scheduled to open in early 2021 says it will work with Kansas City Southern of Mexico to offer a shorter, cheaper way for Mexican manufacturers to ship goods to Houston and other Texas markets.

North American intermodal volumes down in every category in 2019
06 Feb 2020
There are no positives to be found in the Intermodal Association of North America’s latest market report, which shows year-over-year volume fell 7.4 percent in the fourth quarter of 2019 and 4.1 percent for the full year, with declines in all types of containers.

US intermodal poised to end 2019 at three-year low
26 Nov 2019
Barring a major turnaround in December, BNSF Railway and CSX Transportation will record their lowest annual intermodal volumes this year since 2016, and two other Class I railroads could possibly join that list.

Protests again disrupt rail service into Lázaro Cárdenas
24 Oct 2019
The third blockage this year of the main rail line into the Mexican Port of Lázaro Cárdenas, which is operated by Kansas City Southern of Mexico (KCSM) will likely add to shipper fears that moving cargo by rail is unreliable.

Yilport vision for Gulfport gaining momentum
24 Jul 2019
Yilport and the Mississippi State Port Authority are making headway in agreeing to a concession and aim to have a binding letter of intent — featuring a roadmap of planned investments — by the end of the year.

US regulators set sights on rail demurrage
22 May 2019
The Surface Transportation Board put Class I railroads on the hot seat about demurrage and accessorial policies that rail shippers have described as unreasonable and revenue generators.

Rails work to reduce Houston congestion
18 Apr 2019
Kansas City Southern referred to congestion in Houston as a smaller version of Chicago gridlock, while acknowledging coordination with Union Pacific Railroad needs to be better and precision scheduled railroading could help.

Jury still out on ‘precision’ railroading in US
05 Apr 2019
CSX has shown signs of better service under the PSR model, but shippers and analysts say there are still important performance benchmarks PSR railroads in the US have not yet achieved.

Protest traps Mexican imports at west coast ports
23 Jan 2019
The closure of rail lines at the two biggest ports on Mexico's Gulf Coast is shutting down supplies to manufacturers.

Equipment exchange will propel Mexican intermodal
16 Jan 2019
Truckers and equipment providers in Mexico should find it easier to lease intermodal equipment if the country's first uniform interchange agreement goes ahead.

KCS’s New Orleans-Dallas rail shuttle to begin in May
19 Apr 2018
KCS will add a weekly container train between New Orleans and Dallas to feed empty containers to port and provide intermodal capacity to support imports. The Port of New Orleans is trying to leverage its newly acquired Public Belt short line to expand intermodal service.