Jury still out on ‘precision’ railroading in US

Jury still out on ‘precision’ railroading in US 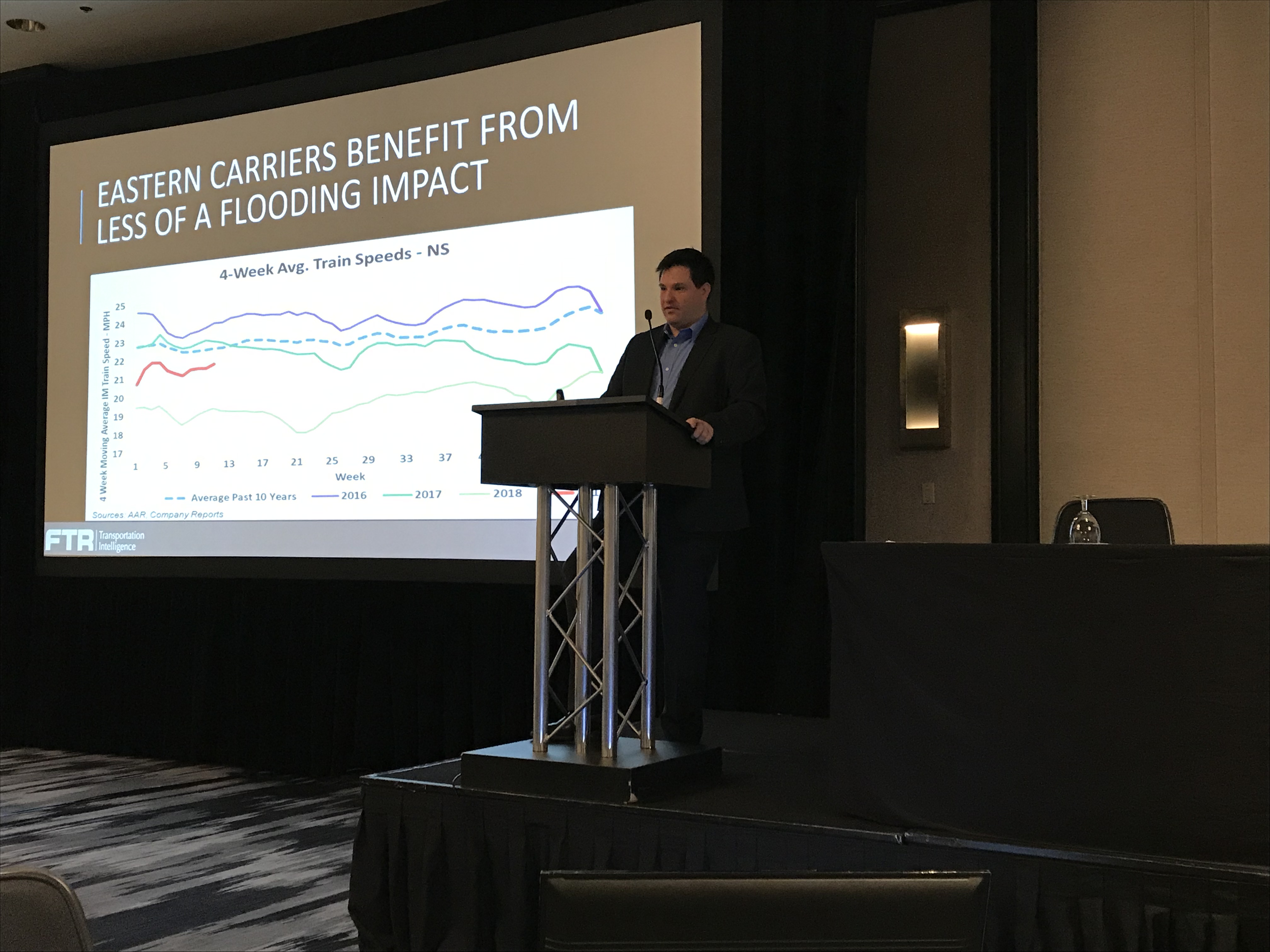 FTR's Todd Tranauski (above) told the NEARS conference that since poor weather hurt rail performance in the first quarter, it's difficult to judge whether precision scheduled railroading can succeed in the US. Photo credit: Ari Ashe.

BALTIMORE, Maryland — Precision scheduled railroading (PSR) has been successful in Canada, but shippers and analysts say the verdict isn’t in yet about whether it works in the US.

The true judge of PSR is whether trains are faster, service is consistent, assets utilization is high, and there is a plan for severe weather. But beneficial cargo owners (BCOs) at the North East Association of Rail Shippers (NEARS) conference aren’t convinced US railroads have reached those standards.

PSR was first introduced in the US when E. Hunter Harrison, who pioneered the model with Canadian railroads a decade earlier, was named CEO of CSX Transportation in 2017. Harrison’s operating philosophy is widely credited for turning around both Canadian National Railway and Canadian Pacific Railway, both of which lagged their US competitors in terms of performance and profits. But when CSX rolled out PSR, service and communication was poor in a rushed implementation, and angry shippers persuaded the Surface Transportation Board (STB) to intervene. Service has since improved.

Union Pacific Railroad, Norfolk Southern Railway, and Kansas City Southern Railway are also in the midst of a transition to a PSR operating model. The STB has said it will be paying close attention to prevent another disruption.

PSR networks operate more like passenger trains, buses, and airlines than traditional freight rail services. In those examples, travelers must arrive by a specific time, and the pilot, conductor, or driver won’t delay departure, even for a ticketed passenger. In PSR networks, BCOs must also adhere to a strict schedule.

There is also a lean component to PSR. An airline, for example, would rather fly 900 passengers on six planes of 150 people each than on 12 planes of 75 passengers. Likewise, the goal in a PSR network is to use fewer trains that are completely full. Every well or flat car should have freight — just like every seat should have a passenger — to maximize revenue.

There are several ways to evaluate such a system, and results based on these benchmarks have been mixed to date.

One metric is asset utilization. If an airline can use six planes instead of 12, the other six are either re-deployed to other locations or sold off. A lean PSR operation scraps excess assets, rather than letting them collect mothballs.

But data from FTR Associates show total US railcar capacity utilization has risen only a few percentage points, from 75 percent to about 78 percent, since 2017, and has actually declined slightly since UP, KCS, and NS began to install PSR principles.

“Part of that might be because the railroads are implementing [PSR] more gradually than in the past. Part of it might be that shippers aren’t seeing the benefits yet,” said Todd Tranausky, FTR’s vice president of rail and intermodal. “We don’t know what to expect of PSR, or think of it yet, but that should become clearer in the next six to nine months, as railroads get further into implementation.”

Ross Corthell, director of transportation for Packaging Corporation of America, said his company shifted some loads to truckload during CSX’s rocky rollout in 2017. Nevertheless, he agreed that PSR has resulted in shippers needing fewer railcars because equipment turns are quicker.

Corthell warned, however, that railroads need to “maintain open lines of communication” with shippers, keep enough capacity in the network, and “not make the cuts so deep.”

Average train speed is another common way to measure performance. When there are fewer trains running, the chances of a problem go down. Fewer breakdowns means a train departs and arrives at the same time, every time with consistent speeds.

CSX’s intermodal train speeds improved 5.4 percent in 2018 and are nearly 9 percent higher in 2019 on a year-over-year basis. UP’s intermodal train speeds have declined 10 percent in 2019 because of snowstorms, flooding, and overwhelming international volumes in January. Intermodal speeds are about even year over year for KCS and 5 percent faster for NS, but neither had the same weather and volume challenges that UP had to deal with.

That being said, US freight railroad service has been inconsistent for years. An intermodal haul from Baltimore to Chicago, for example, takes two days on a truck. It should take up to four days on a train, but one haul might take six days, another eight, while a third arrives “on time.”

This is especially critical for intermodal service because of trends in ton miles by commodity. The top 10 declining commodity groups include newspaper and paper products, minerals, coal, and other staple rail products, according to FTR. The top 10 growing commodity groups, on the other hand, include e-commerce goods, hardware and plumbing, appliances and electronics, and alcoholic beverages, all products that can easily be moved either by truck or rail.

As railroads look to improve service using PSR, they also need to keep in mind the changing freight mix, lengths of haul, and service requirements if they want to grow volume and fend off the lure of trucking when just-in-time shipping and speed to market are more critical than ever.