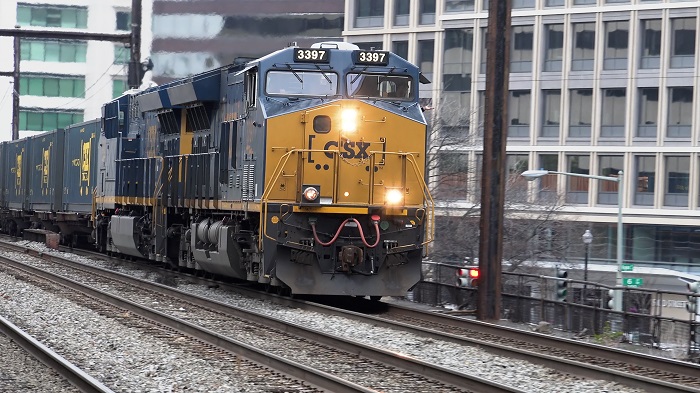 Although CSX’s new CEO is a disciple of the late, great E. Hunter Harrison’s precision railroading, there are reasons shippers should look for a softer approach to their concerns. Photo credit: Shutterstock.com.

CSX Transportation in the April-June period may have hit its best quarterly operating ratio of 58.6 percent, a railroad’s best measure of profitability. The coming months, however, will reveal whether the same efficiency envisioned by its late CEO, E. Hunter Harrison, can be achieved for its intermodal franchise — and shippers are along for the ride as North America’s intermodal peak season nears.

The railroad’s intermodal challenges came into focus during the carrier’s second-quarter earnings call on July 17. CEO James Foote’s admission that the intermodal franchise “to a large degree, is dysfunctional” came after intermodal shippers experienced a service disruption in the early months of Harrison’s network shake-up and now have fewer domestic service options, after the culling of more than 300 origin and destination pairs since March 2017. More changes are on the way.

“We are going to have very good and open communication with our customers about what it is we're trying to accomplish, and it involves train design changes, it involves terminals, and potential terminal consolidations,” Foote said. “And we will do this very methodically and logically and appropriately, and do it being fully aware of the fact that we are looking at a peak season this year which everybody is indicating [to] us is going to be very strong.”

Foote said the changes will allow CSX, whose network spans the eastern half of the United States, to provide a stronger intermodal service that can collect a premium. With shippers paying 15 to 20 percent more for truck than rail, “why discount your better-quality product when you know you can go save the customer money by having a service that’s more truck like?” International intermodal growth drove the 7 percent year-over-year rise in volume in the second quarter, with domestic intermodal, the product competing with truck services, virtually flat.

CSX said it’s integrating intermodal cargo with carload volume and running longer trains on time, practices that have driven it to what it says is the railroad’s best on-time performance in more than a year. “This will service us well with peak coming up,” CSX said, emphasizing that any service changes would be communicated to give shippers sufficient time to respond.

To prepare for the uptick in intermodal demand as retailers stock up for the winter holiday shopping season, CSX has improved its ability to track shipments in real time, tightened storage and equipment policies, introduced gate reservations systems at four terminals, adjusted train schedules for better flow, and improved notification to drayage drivers for when particularly time-sensitive shipments, or “hot loads,” are ready for pick-up.

“Terminal dwell is our most significant concern going into peak and it is imperative that our customers and BCO [beneficial cargo owner] community take action to pick up containers in a timely manner,” CSX said in a statement.

Look for a softer approach to shipper concerns

Expect a softer approach to shipper concerns as CSX works to mend relationships with shippers, which were hurt when Harrison rolled his aggressive, cut-to-the-bone strategy that succeeded in raising profits when he led Canadian National Railway from 2003 to 2009 and then Canadian Pacific from 2012 to 2017. CSX’s breakdown in intermodal service — which appears to have recovered, with train speeds in the 28- to 29-mph range compared with lows of 27 mph during the spring of 2017 — also drew the scrutiny of the Surface Transportation Board, the US rail regulatory agency.

Foote may be a follower of Harrison’s precision railroading gospel — the disciplined scheduling of services forcing shippers to deliver cargo at set times or miss train starts — but he’s signaling a less “bull in the china shop” approach. Whether it was Claude Mongeau at CN or Keith Creel at CP, it’s left to Harrison’s successors to repair damaged shipper relationships and reintroduce stronger intermodal services.

CSX also appears to be rethinking the investments Harrison scuttled to slash operating costs. The latter was Harrison’s holy grail, evidenced in Howard Green’s soon-to-be-released Harrison biography, Railroader, which is filled with telling details, such as his first corporate jet having “OR59” as its tail number, a node to operating ratio goals.

CSX, for example, appears to be rethinking its decision to pull back on expanding the Howard Street Tunnel Project, something the Port of Baltimore needs in order to achieve double-stack access and thereby extend its inland reach. And, after pulling back on plans to connect Charlotte, North Carolina, and the Port of Wilmington, CSX has recommitted, though has scaled the project down.

“Whether a CSX intermodal customer sees service improvements after the network revamp may well depend on what lane(s) that customer is using,” said Lawrence J. Gross, an independent intermodal analyst who writes monthly columns for The Journal of Commerce and JOC.com. “The revamped and, in all likelihood, streamlined network may provide superior service versus today on the lanes it offers, but perhaps no service at all on lanes or out of terminals that don’t fit the new operating structure.”

Central to the question of whether CSX can improve service is whether the practices adopted for east-west-focused Canadian railroads that Harrison previously led are applicable to the spaghetti that is CSX’s network. It looks to be a tough haul, and not just in terms of convincing shippers — who are facing tighter truck capacity and higher over-the-road rates — that CSX intermodal service is here to stay. Reports of employee resistance to CSX’s culture change persist, and its history of being cobbled together with smaller lines continues to haunt the railroad. “We don’t have a culture,” Harrison said, according to Railroader. “We have about 19.”

And as Green notes in his incisive and well-balanced biography, Harrison acknowledged steeper hurdles to his last attempt to overhaul a railroad. “Harrison was not quite six months into the job [at CSX] and admitted that he’d thought it would be easier. This was also going to be his last act, so there was more pressure. ‘It’s going to be the hardest one by far,’ he said. It was giving him nightmares.”