CSX Transportation is a U.S. Class I railroad serving major markets in the eastern United States with a rail network of 21,000 route miles in 23 states, the District of Columbia, and the Canadian provinces of Ontario and Quebec.The company has more than 31,000 employees and provides rail-based transportation services including traditional rail service and the transport of intermodal containers and trailers. The company reported 2013 revenue of $12 billion, up 2.2 percent year-over-year. The railroad also reported a net income of $1.86 billion, consistent with the previous year’s net income which was also $1.86 billion.

US Offshore Wind: Where Is the Market Heading?
Learn how IFP Corp uses technology to improve operational efficiency and improve margins
END_OF_DOCUMENT_TOKEN_TO_BE_REPLACED

The US-China Trade War: Where Do We Go From Here?
END_OF_DOCUMENT_TOKEN_TO_BE_REPLACED 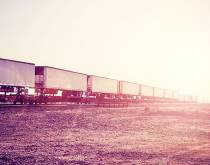 31 Dec 2019
US intermodal, particularly domestic volume, has a tough road ahead given low spot truckload rates that will continue to push freight to the highway, but the sector could see some improvement in the second half.
MORE »

US intermodal poised to end 2019 at three-year low
26 Nov 2019
Barring a major turnaround in December, BNSF Railway and CSX Transportation will record their lowest annual intermodal volumes this year since 2016, and two other Class I railroads could possibly join that list.

CSX, UP push efficiency despite sharp Q3 intermodal declines
17 Oct 2019
CSX Transportation and Union Pacific Railroad reported weak intermodal volume for the third quarter, but insisted their networks are lean, efficient, and ready to fully capitalize when the market rebounds.

Savannah intermodal surges as rail work pushes ahead
13 Aug 2019
The port of Savannah’s intermodal terminal expansion project is about 40 percent complete as rail volumes set a new record in July.

Yilport vision for Gulfport gaining momentum
24 Jul 2019
Yilport and the Mississippi State Port Authority are making headway in agreeing to a concession and aim to have a binding letter of intent — featuring a roadmap of planned investments — by the end of the year.

CSX says lower truck rates hurting intermodal
17 Jul 2019
CSX Transportation lowered its guidance for 2019 after offering a grimmer view of the freight market than J.B. Hunt had a day earlier, warning investors that the second half of the year could be worse than the first.

Intermodal rail providers prep for smoother peak
08 Jul 2019
The intermodal peak season is expected to be a manageable one with domestic volumes continuing to be weak and abundant container capacity, while international loads will increase at a slower pace than a year ago. Industry stakeholders believe intermodal service will be good in the peak season.

Schneider expands intermodal as truck competition heats up
26 Jun 2019
The eighth-largest US trucking operator adds an intermodal option in Indianapolis, making service between the US Midwest and Northeast more competitive with trucks.

Rail demurrage stings US shippers without weekend warehousing
29 May 2019
Although last week’s Surface Transportation Board hearing didn’t include intermodal, shippers complain about penalties assessed when their cargo arrives on a Friday night and their warehouses are closed until Monday.

US regulators set sights on rail demurrage
22 May 2019
The Surface Transportation Board put Class I railroads on the hot seat about demurrage and accessorial policies that rail shippers have described as unreasonable and revenue generators.

Amazon, Walmart look to insource railroad deals
21 May 2019
Retail giants Walmart and Amazon have entered into conversations directly with Class I railroads to enter in service agreements, bucking the historical structure in which shippers are required to use intermediaries to procure space.

US intermodal slump raises truck competitiveness questions
17 Apr 2019
Intermodal volume will be down for many of the Class I railroads and trucking companies providing intermodal service, and although weather is an excuse, larger questions remain about the sector in the short and long term.

Intermodal falters in Q1, service wanes
11 Apr 2019
North American intermodal volume ended the first quarter worse than initially forecast due to changing shipping patterns and flooding in the Midwest, but there are signs that this is an inflection point to a difficult 2019 and not a fleeting blip.

Jury still out on ‘precision’ railroading in US
05 Apr 2019
CSX has shown signs of better service under the PSR model, but shippers and analysts say there are still important performance benchmarks PSR railroads in the US have not yet achieved.

CSX rolling out truck reservation system
14 Mar 2019
CSX Transportation is requiring shippers to book reservations for their truckers to return empty containers or drop off loaded boxes, which has gone smoothly in smaller markets but caused major concerns in Chicago, Memphis, and Nashville.

NY-NJ rail projects target fluidity
11 Mar 2019
Two projects will add more than 28,000 square feet of new track inside the US East Coast's largest port, most of which will be used to store empty rail cars and build trains.

Baltimore asks DOT to plug Howard Tunnel funding gap
05 Mar 2019
The state has revived a project to raise the ceiling of CSX's Howard Street Tunnel to and from the Port of Baltimore in an effort to attract more Midwest cargo.

US intermodal growth to slow as tariffs pinch
14 Jan 2019
Class I railroads face uncertainty in global trade, as well challenges in service and pricing, to keep momentum going in 2019.

Multimillion funding gap blocks Baltimore from double-stack rail
06 Dec 2018
The advantages of double-stack trains are well known; even so, Maryland stakeholders remain short a substantial some of money for the project.

CSX intermodal service metrics follow profits in upswing
17 Oct 2018
CSX is the only Class I railroad offering better train speeds and lower terminal dwell times while volumes are on the rise.

CSX to eliminate about 300 more intermodal lanes in 2019
05 Oct 2018
The announcement is yet another decision to condense CSX’s vast intermodal network into precision scheduled railroading.