BNSF Railway is one of the U.S. Class I railroads serving especially the western half of the country, with a rail network of 32,500 route miles in 28 states and two Canadian provinces and more than 43,000 employees. The Fort Worth, Texas-based railroad was created in 1995 from the merger of Burlington Northern Inc. (parent of Burlington Northern Railroad) and Santa Fe Pacific Corp. (parent of the Atchison, Topeka & Santa Fe  Railway). BNSF became a subsidiary of Berkshire Hathaway, Inc., in 2010.

Canada Trade and Shipping Outlook
TPM22: What We Learned — Container Shipping in the Crosshairs
Managing E-Commerce From Order to Delivery and Beyond
END_OF_DOCUMENT_TOKEN_TO_BE_REPLACED 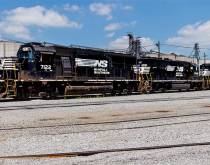 20 May 2022
Norfolk Southern Railway is reducing service on 120 international intermodal lanes to simplify its network and improve service, but some companies are worried it will harm exporters and chassis supply.
MORE »

Chassis struggles return to Chicago despite lower demand
16 May 2022
Chassis shortages are disrupting rail ramps in Chicago for the second consecutive year, but cargo flow through other inland markets outside the Upper Midwest is more fluid than a year ago.

JOC ISI: Q1 contract rail rates provided big savings
05 May 2022
Intermodal shippers saw record-high savings under contracts signed in Q1, but a recent slide in the spot truckload market could diminish the savings that rails can provide on one-off business over the next three months.

Bentzel wants partial FMC oversight over rail demurrage
28 Apr 2022
Federal Maritime Commissioner Carl Bentzel wants the agency to regulate rail storage fees in certain cases when ocean containers cannot be picked up from an intermodal terminal through no fault of the cargo owner.

BNSF partner COFC Logistics buying 5,500 domestic containers
22 Apr 2022
COFC will buy 5,500 new containers in the next 12 months to provide a BNSF Railway alternative for Schneider customers who do not want to switch to Union Pacific Railroad in 2023.

BNSF pilots Houston intermodal service as record volumes tax truckers
13 Apr 2022
The sharp growth in container volumes at the ports of Houston and Mobile is spurring increasing demand to move freight via rail as truckers hit the limit on how much they can handle.

BNSF struggling to deliver ocean boxes from Los Angeles to Chicago
08 Apr 2022
A recent resurgence in international intermodal volumes is causing BNSF Railway to struggle to provide consistent service, disrupting the flow of containers between Los Angeles and Chicago.

Latest US import surge tightens inland chassis pools
25 Mar 2022
Marine chassis pools are getting tighter after a jump in international intermodal volume from West Coast ports in February, but stakeholders are hopeful of avoiding a repeat of 2021 when BNSF and Union Pacific terminals were overwhelmed with cargo.

BNSF-JB Hunt enhance partnership to replace Schneider, Swift volumes
16 Mar 2022
J.B. Hunt Transport Services will grow its box fleet by 40 percent to 150,000 containers within three to five years as it seeks to win market share from Union Pacific Railroad and its intermodal partners.

BNSF service unaffected by coming shift to UP: Schneider
14 Feb 2022
Schneider wants intermodal customers to know that service will remain strong on BNSF Railway this year ahead of its transition to rival Union Pacific Railroad in 2023.

JOC Intermodal Savings Index: Record contract savings in Q4
04 Feb 2022
Intermodal contracts saved shippers more money than ever in Q4, but they saved much less money on the spot market due to surcharges in California.

Outlook 2022: West Coast ports face continued congestion, vessel backlogs
14 Jan 2022
Plagued by vessel bunching, terminal congestion, and equipment shortages for much of last year, North America’s West Coast ports are cautioned that these conditions are likely to persist well into 2022 even if imports slow from the double-digit gains in 2021.

UP canceling peak season rail surcharges
07 Jan 2022
Union Pacific Railroad will rescind its peak season surcharges, a sign that domestic intermodal congestion in the western US has improved considerably in recent weeks

APL Logistics shifts domestic intermodal business from BNSF to UP
28 Dec 2021
Domestic intermodal shippers who want to use BNSF Railway to send cargo in 53-foot containers will have one fewer service option come Jan. 1, JOC.com has learned.

SoCal excessive dwell fees could discourage intermodal rail moves: BNSF, UP
12 Nov 2021
BNSF Railway and Union Pacific Railroad are concerned cargo owners will use trucks instead of trains in the ports of Los Angeles and Long Beach due to the Excessive Container Dwell fee.

UP, BNSF end metering from ports as inland congestion eases
11 Nov 2021
The backlog of ocean containers clogging intermodal hubs in the interior US has eased considerably in the past three months thanks to limitations placed on rail volumes flowing inland from major import gateways, but the ports themselves remain congested.

BNSF, UP offer rebates to encourage LA-area weekend drop-offs
26 Oct 2021
The western US railroads are offering refunds to customers who bring containers into their Los Angeles metro intermodal terminals on the weekends, a move to incentivize off-peak business.

BNSF contends Chicago flow better, but truckers say woes remain
11 Oct 2021
BNSF Railway said it has moved all ocean containers in Logistics Park Chicago to truck-accessible locations, but truck drivers say that has not solved all the problems they’ve been dealing with since the summer.

BNSF metering space on LA-Chicago intermodal trains
19 Jul 2021
BNSF Railway is rationing the number of ocean containers it will move between Southern California and Logistics Park Chicago for two weeks in an effort to relieve mounting congestion caused by a flood of imports to the Midwest.

BNSF axes Northern California-Ohio joint service with CSX
16 Jul 2021
BNSF Railways has ended domestic intermodal service between Northern California and CSX Transportation’s terminal in northwest Ohio, with a source saying a lack of shipper interest was behind the move.

CSX cuts appointment slots in Chicago amid widespread congestion
02 Jul 2021
CSX has temporarily cut the number of reservations to bring in domestic containers in Chicago because of overwhelming volume, a common theme among the Class I railroads struggling in the Windy City.

Midwest marine chassis shortage worse than two months ago: TRAC
18 Jun 2021
Chassis providers are struggling to provide equipment for ocean containers in the US Midwest and Pacific Northwest as shippers hold onto chassis excessively even more frequently than earlier this year, according to importers and TRAC Intermodal.