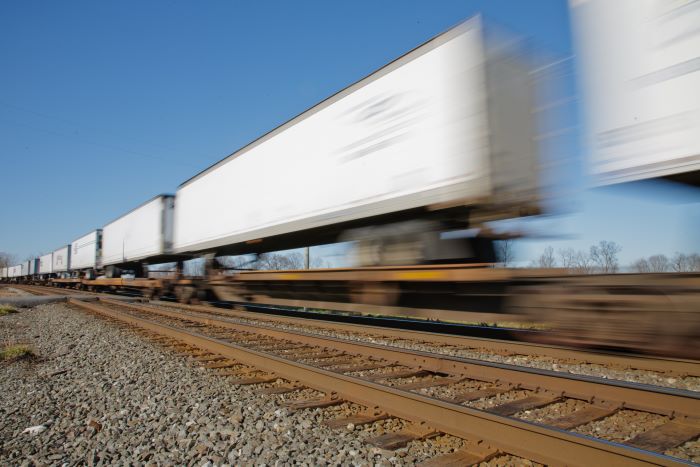 The world in which intermodal will compete will become more complex and demanding, and a “one-size-fits-all” approach won’t be the optimal plan. Photo credit: Shutterstock.com.

Setting aside the immediate and significant impacts of the coronavirus disease 2019 (COVID-19) and accompanying lockdown, it is becoming increasingly clear that once we manage to get to the other side of the crisis, things won’t be getting back to “normal.” It’s trite, but accurate, to say that there will be a “new normal.”

Forces have been set in motion that will slowly but inexorably change the status quo in myriad ways. One of the more significant changes will be a great dispersal insofar as where freight is coming from and where it is going. This will cause changes across the economic spectrum, and intermodal will not be immune. The current intermodal focus on running the simplest possible network of the largest trains will also need to change in the years to come in order to adapt to this new reality.

What are some of these looming changes? Looking at international trade, for sure we will see continued efforts to decouple the US and Chinese economies to the greatest extent feasible. The dangers of single-sourcing have been — once again — dramatically illustrated. Further, geopolitical tensions will make doing business with China considerably less comfortable than was the case previously.

The slowing Chinese economy is putting ever more pressure on the central government, which will inevitably lead to efforts to divert attention from the deteriorating domestic situation toward the outside. A more muscular and adventurous foreign policy will result in increasing friction in places such as the South China Sea. Thus, for reasons both economic and geopolitical, efforts will be redoubled to diversify sourcing away from China.

Revisions will include sourcing from other countries such as those of Southeast Asia, as well as a more serious look at the infant trends of nearshoring and reshoring. This will mean more fragmentation of trade flows. This splintering is rendering the large mega-ships that have been the darlings of the ocean carriers instantly obsolete, although the steamship lines will be dealing with these albatrosses for years to come.

In a broader sense, the pandemic crisis will cause an examination of the wisdom of maintaining “just-in-time” international supply chains. Lowest delivered cost will still be important, but it won’t be the only consideration. At a minimum, safety stocks or redundancy will be beefed up. For strategic or key commodities, having a core or backup capability located domestically or close at hand will be more common. Diversification in sourcing, routing, and distribution will be a basic requirement.

Dispersal of sourcing is only half the story, however. The other piece, perhaps more important, will be the dispersal of consumption. For instance, it seems likely that both companies and their workers have learned from their crash course in telecommuting. Employers have pivoted with amazing speed, and the office will never be the same. Why incur the expense of maintaining support and a facility for a large bullpen operation such as a call center when the same job can be accomplished from a hundred individual kitchen tables scattered across the nation or the world? While some team members will still need to be in the office, maybe they won’t need to be there every day or even every week. The implications are large. Office space requirements will be reduced, resulting in a glut of office real estate. Commuting trips will be eliminated, with consequent impacts on congestion, pollution, fuel consumption, and enhanced productivity.

What does this say about the need for businesses to be “downtown” or even in particular cities? We can expect an aversion to mass transit to persist for some time. Will companies be willing to continue to pay sky-high rents for the “right location” downtown when many of their associates are telecommuting and are generally reluctant to utilize the mass transit needed to get there? Or will they decamp to lower-cost locations in the suburbs or smaller, lower-cost, and less dense cities?

The basic bargain of city life is being upended. People have been willing to put up with high costs and living cheek by jowl with a vast population of neighbors in return for the economic opportunity and cultural resources of the big city. Now, the pandemic has degraded the benefits and escalated the costs. The logical response, for those that are able, is to relocate to a less stressful and safer existence in a place where people can spread out and fresh air is accessible while maintaining prudent social distancing.

The traditional model of retail is also in the process of being upended. Home delivery/e-commerce is ascendant, and the pandemic recession is accelerating the inevitable exit of the traditional department store. Brick-and-mortar retailers have been offering curbside pickup and customers no doubt have enjoyed the taste of this new convenience. This is not to say that the activity of shopping will become obsolete, but the mix is likely to change, with more customers availing themselves of curbside pickup for necessities while reserving “shopping” for discretionary purchases such as fashion. This holds implications for the physical structure of retail, with retail spaces, particularly big-box locations, being transformed into a mix of store and local distribution center. With more touch-and-go transactions, both store footprints and retail parking requirements will be reduced.

Changes will come, but slowly

Obviously, changes of this magnitude won’t happen overnight. The creation of an alternative supply chain strategy to replace “outsource to China” will take years, as will the kind of changes that will occur back here at home. These changes are somewhat similar to the tectonic movements of the earth’s crust — generally so slow as to be invisible but also inexorable and with results that become clearly visible over time and “inevitable” when looked at in hindsight. An analogous example in our lifetime were the changes wrought in the aftermath of 9/11. How many ways our lives were transformed by that event! But the CoOVID-19 pandemic is, if anything, much more significant.

What might all this mean for intermodal? Broadly, it probably will mean that there will be continued dispersion of freight flows. Smaller metro areas will grow at the expense of large cities. Inventories will continue to move closer to the point of consumption, with large retail big-box stores being transformed partially into “mini-DC’s.”

Imports will grow only at the rate of growth in the domestic economy, or perhaps slower. The west-to-east migration of imports will likely continue as sourcing moves away from China. The mega-ship trend will recede and ships will eventually settle into the 11,000 to 14,000 TEU range, perhaps smoothing out cargo flows.

The bottom line is that amalgamating volumes into mega-trains will become more difficult over time. Freight will become more dispersed both geographically and temporally. Intermodal can certainly compete in this changing environment. There will be opportunities created. For instance, the transportation content of the multi-step process of sourcing and manufacturing an item here at home will be much greater than the one-shot movement of an imported finished product from port to point of consumption. The market available to domestic intermodal, therefore, may increase. In particular, north-south flows may grow as more production returns to North America. But tapping this market will require more agility and some altered thinking. The world in which intermodal will compete will become more complex and demanding. A “one-size-fits-all” approach won’t turn out to be the optimal plan.