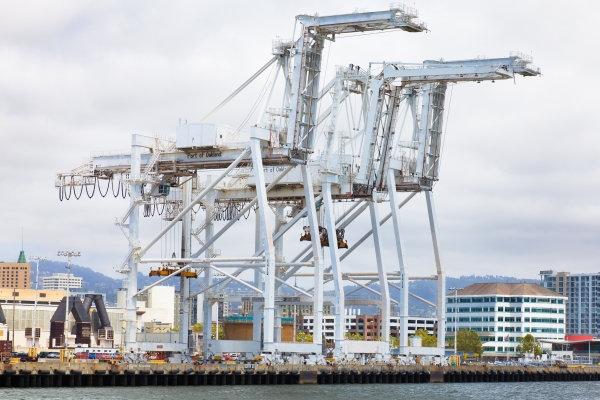 Cranes at the Port of Oakland

Container volumes handled by U.S. West Coast ports grew more than three times faster than those at East Coast ports in the first eight months of the year, as lingering effects of last year’s labor negotiations and computer problems at one of the biggest terminals in the Port of New York and New Jersey dragged down overall throughput growth.

Total throughput handled by West Coast ports increased by 1.9 percent in the year through August, compared with the first eight months of 2012. In the same period total East Coast port throughput edged up by only 0.5 percent year-over-year, according to data compiled by PIERS, a sister company of The Journal of Commerce.

The severe snafus encountered during installation of new terminal software at Maher Terminal in the Port of New York/New Jersey are clearly evident in the volumes handled by Northeast ports, which includes Boston. Maher’s problems spilled over to other terminals, which were clogged by volumes that Maher couldn’t handle. As a result Northeast ports, including Boston, saw the largest eight-month declines in both throughput, which dropped by 4.9 percent, and exports, which plunged 10.1 percent.

Other East Coast ports benefited from New York’s travails. Mid-Atlantic ports, which include Philadelphia, Baltimore and Norfolk, saw the highest growth rates over the same period in 2012, with total throughput up 10.9 percent, imports climbing 7.9 percent and a 14.8 percent jump in exports. 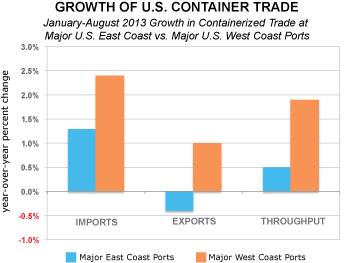 Southeastern ports, which include those from Charleston south to Miami, grew more slowly, with total throughput in the eight-month period up 0.6 percent, imports up 1.8 percent and exports down 0.5 percent. The decline in exports from both Northeast ports and Southeast ports combined to cause an overall 0.4 percent decline in East Coast exports for the period, the only category on either coast that saw a decline.

On the West Coast, the fastest throughout growth in the eight-month period was in Oakland, where total imports and exports climbed 4.8 percent, compared to the 2.3 percent increase in throughput at Los Angeles-Long Beach . This is a statistical anomaly because the growth in Oakland comes off a far lower base than the Southern California ports, which have combined volumes almost seven times as large as Oakland’s.

Oakland, which exports more than it imports, saw its exports climb by 5.1 percent year-over-year in the eight months, while imports grew by 4.4 percent. At Los Angeles-Long Beach, imports increased 3.4 percent, while exports edged down by 0.1 percent.

In the Pacific Northwest ports of Seattle, Tacoma and Portland, total throughout declined 1.5 percent year-over-year, largely because carriers are using their big ships to transport Asian imports into Southern California first and then picking up exports back to Asia out of Oakland. Carriers are using smaller ships to serve the PNW ports, where imports dropped 3.5 percent year-over-year, the largest import decline in any regional group of U.S. ports, while exports grew only 1.1 percent.

Global Shipping Outlook: A Sneak Peek at 2021
Port Performance North America: Managing Cargo Flow During a Pandemic — and Beyond
END_OF_DOCUMENT_TOKEN_TO_BE_REPLACED