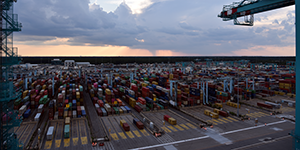 Its deepwater harbor, the deepest on the US East Coast, shelters the world’s largest naval base; a robust shipbuilding and repair industry; a thriving export coal trade and the sixth largest containerized cargo complex in the United States. The port offers 50-foot channels, inbound and outbound, and is the only US East Coast port with Congressional authorization to dredge to 55 feet.

Nearly 30 international shipping lines offer direct, dedicated service to and from Virginia, with connections to more than 200 countries around the world. In an average week, dozens of international container ships; breakbulk, and roll-on/roll-off vessels are serviced at its marine terminals.

Solving for Uncertainty: A Guide to Variable Transportation Budgets
END_OF_DOCUMENT_TOKEN_TO_BE_REPLACED 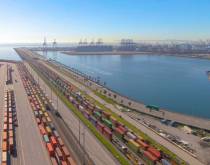 18 Jun 2021
The six busiest North American ports eked out gains in import market share during 2020 thanks to the surge in inbound container volumes at the biggest gateways.
MORE »

Drayage demand at record levels in Southeast amid import surge
04 Jun 2021
Drayage capacity from Southeastern US ports is so low right now that ocean carriers, NVOCCs, and shippers are scouring to locate small truck carriers on the spot market and paying extra to get their loads hauled.

New federal funding brings Norfolk closer to 55 foot deepening
02 Jun 2021
The Port of Virginia believes two milestones will put them on firm footing to become the deepest port on the US East by late 2023 or early 2024.

Outlook 2021: US Southeast ports prioritizing projects to handle more mega-vessels
26 Jan 2021
Cargo gateways across the US Southeast will invest upwards of $850 million in 2021 on a wide range of enhancements that will allow terminals to handle multiple vessels of 14,000 TEU and above simultaneously.

US East Coast chassis providers weathering cargo surge
07 Jan 2021
The chassis network on the East Coast has held up during the recent import surge due to better communication and data, and more reliable equipment.

Port of Virginia expansion continues amid CEO transition
29 Dec 2020
The Port of Virginia’s new CEO will start his job Jan. 19 and immediately have a host of short- and long-term projects to oversee to position the port as a top East Coast gateway.

Port of Virginia maintains cargo flow despite record November volume
22 Dec 2020
Despite an all-time record in container throughput last month in Norfolk, the Port of Virginia has maintained fluidity through terminals and ensured equipment is available to truckers.

Import surge at Southeast ports tightens chassis availability
10 Dec 2020
Volume in Georgia, South Carolina, and Virginia is rising quickly, including an all-time container record in Savannah and Norfolk in November, due to continuing demand for furniture and appliances.

Terminal operator veteran Edwards to lead Virginia port
28 Oct 2020
With more than $1.5 billion in port projects underway, Stephen Edwards is positioned to drive Virginia’s performance particularly in terms of the port gaining a larger share of Asia imports into the Midwest market.

Port of Virginia marks strong recovery with record September volume
01 Oct 2020
The Port of Virginia’s year over year volume rose in September for the first time since the COVID-19 pandemic, with truck turn times still less than 40 minutes on average but elevated rail container dwelling.

Virginia container-on-barge traffic surging on grocery demand
23 Jun 2020
Volume at the Port of Virginia’s inland port in Richmond has jumped this year because it serves BCOs who have thrived during the pandemic amid limited restaurant options and a rise in e-commerce orders.

Retiring Reinhart leaving Virginia port stronger
19 May 2020
John Reinhart, the CEO of the Virginia Port Authority, will retire from his position in March 2021, capping a tenure in which volume grew from 1.9 million TEU to 2.2 million TEU and the expansion and semi-automation of its two main container terminals.

COVID-19 Freight Update: US ports, warehouses stay open
20 Mar 2020
Workers at ports, warehouses, and trucking companies are receiving exemptions from state “stay-at-home” mandates because they are judged as essential to the US supply chain.

Virginia moves to become deepest US East Coast port
15 Oct 2019
The first step in dredging the harbor in Norfolk will begin in January 2020, kickstarting a project that will make the Port of Virginia the deepest harbor on the East Coast.

East Coast ports reopen as Dorian pushes offshore
06 Sep 2019
Ports in North Carolina, South Carolina, and Virginia are expected to reopen this weekend with relatively normal operations, while the Port of Halifax waits to see how much of an impact Dorian will have there.

Carolinas, Virginia bracing for Dorian
05 Sep 2019
Hurricane Dorian is causing flooding, high winds, and tornadoes in the Carolinas and is expected to impact southeast Virginia Friday and southeast Massachusetts Saturday.

Containers, cranes removed from US tariff list
14 Aug 2019
The containerized shipping industry was able to convince the US Trade Representative to take cranes and containers off a list of tariffs going into effect on Sept. 1 and Dec. 15.

COO Tibbetts to leave Virginia port
05 Aug 2019
Shawn Tibbetts, who joined the Port of Virginia in 2003 and oversaw the implementation of a truck appointment system at the Virginia International Gateway and the rollout of Navis N4 at VIG this year, is leaving the port later this month to join a real estate investment trust.

Industry lobbies to pull tariffs on port equipment
18 Jun 2019
Marine industry leaders testified before the Section 301 Committee to lobby against a 25 percent tariff on shipping containers and ship-to-shore cranes, repeating many of the arguments made a year ago about the business fallouts.

US ports make grab for infrastructure funds
13 Jun 2019
The US Department of Transportation is accepting grant applications for $292.7 million in funding dedicated to port infrastructure development.

Port of Virginia expects ‘healthy’ growth in 2019
10 Apr 2019
Virginia Port Authority CEO John Reinhart says the port could see multiple mega-ships calling at once by 2020, as carriers move away from smaller vessels under the IMO’s low-sulfur fuel rules.