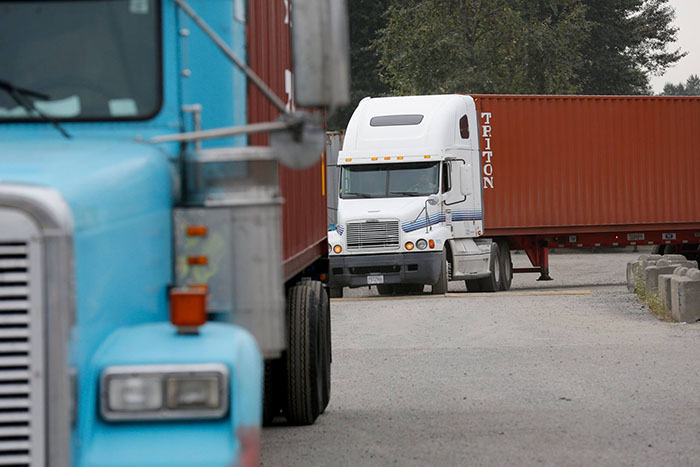 The Northwest Seaport Alliance has made several adjustments in response to the increased truck congestion.

Seattle’s largest container terminal is struggling to improve trucker turn times that ranged from one hour to as much as one day in the past two weeks because of a surge of new business gained from the restructuring of the global vessel-sharing alliances in April.

Some truckers last week reported that it took them all day to take delivery of containers at Stevedoring Service of America’s (SSA's) Terminal 18, and they were charging cargo owners as much as $70 an hour waiting time. “It certainly has been an issue, a big issue,” said Jim Tutton, vice president of the Washington Trucking Association.

“We did get more volume because of the alliances,” said Ed DeNike, SSA’s chief operating officer. Yard and gate operations were affected. DeNike said SSA is in the process of implementing certain measures to address the congestion. “It should be better by next week,” he said.

Tara Mattina, spokeswoman for the Northwest Seaport Alliance of Seattle and Tacoma, said  Terminal 18 in North Harbor (Seattle) and the Husky Terminal in South Harbor (Tacoma) received new business when the four carrier alliances on April 1 reconfigured into three larger alliances — 2M, Ocean, and THE Alliance. Some terminals picked up business, but others lost volume when vessel deployments were changed.

It took about one month for the new vessel rotations to take effect on the West Coast, and the impact of the new service strings has been uneven up and down the coast.

There were no specific issues in Oakland, for example, but some terminals in Los Angeles-Long Beach did experience congestion because of a surge in business. For example, Pier T in Long Beach picked up a weekly string of large vessels operated by the 2M alliance of Maersk Line and Mediterranean Shipping Co., and some congestion occurred.

Los Angeles-Long Beach, which in the first quarter accounted for about 72 percent of West Coast container volume, according to the Pacific Maritime Association website, has experienced other problems such as delays in spotting and releasing trains at on-dock and near-dock rail yards. However, another concern, vessel bunching due to delays in vessel departures from Asia, did not materialize. “Still no congestion at all here. Everything flowing smoothly, and ship count for May is very good,” Kip Louttit, executive director of the Marine Exchange of Southern California, said Tuesday.

Mattina said Terminal 18 was hit the hardest of the Seattle-Tacoma terminals. The other terminals were not affected much, she said. SSA, the port authority, the port police, and the Washington Department of Transportation (DOT) have implemented several measures to address the problem, and further steps are planned, Mattina said. This past Memorial Day weekend, SSA added a Saturday gate and a Monday gate. The DOT and port police established staging areas where truckers can wait without creating lines that back up into the main access roads.

Tutton of the Washington Trucking Association said the staging areas were helping to keep trucks from blocking the harbor’s main access road in West Seattle, but in terms of wait times, “We’re still getting a lot of complaints,” he said.

SSA is expected to implement additional measures, such as pre-notifications of arrivals to enable customers to be prepared for cargo delivery when their shipments are ready. SSA in early 2016 experienced a similar spike in volume in Oakland when Outer Harbor Terminal filed for bankruptcy and about 90 percent of its volume shifted to SSA’s Oakland International Container Terminal (OICT). OICT extended its gates and implemented a trucker appointment system, both of which remain in place today.