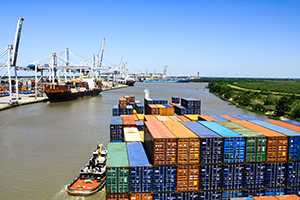 The Port of Savannah will expand the Garden City Terminal to allow the simultaneous handling of six 14,000-TEU ships, accelerating the third-busiest container gateway’s effort to funnel a much larger volume of Asia imports into the US interior. The Garden City Terminal is operated by the Georgia Ports Authority and served by the Class I railroads Norfolk Southern Railway and CSX Transportation.

New rail and berth projects will also boost the total number of Savannah’s ship-to-shore cranes. Over the past two decades, Savannah port has evolved from a port that became the third-largest by attracting the big box retailers, to one that is harnessing the tailwinds of e-commerce and the full potential of intermodal rail. 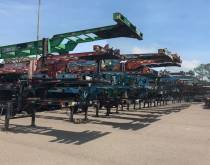 28 Nov 2022
The South Atlantic Chassis Pool 3.0 has received federal approval and should launch officially in 2023, but it will face a daunting challenge satisfying rising demand as discretionary cargo shifts from the West Coast to East Coast ports.
MORE »

SE ports volume to lag in Q4, but fluidity could improve
14 Oct 2022
The anticipated Q4 slowdown in Savannah and Charleston follows a busy summer for the two ports, with combined laden imports rising 9 percent year over year in the third quarter.

New Savannah tariff prods ocean carriers to pick up empties
23 Sep 2022
The Georgia Ports Authority is lowering the number of empties carriers can store at its terminals and increasing fees for storing empties that exceed those allotments.

Volumes en route to Savannah signal September slowdown: GPA
15 Aug 2022
Year-over-year declines in import volumes amid weakening retail sales could help clear the queue of more than 30 vessels outside Savannah during the fourth quarter, according to the Georgia Ports Authority.

GPA extends truck hours amid growing vessel backlog
26 Jul 2022
The Port of Savannah has more than 40 vessels anchored outside its harbor, but the Georgia Ports Authority said the terminal is more fluid today than last fall.

Asia–US East Coast spot rates hit 2022 low as shippers slow ordering
18 Jul 2022
Spot rates for ocean freight from Asia to the US East Coast have fallen as order cancellations by US shippers frees up vessel space.

MSC, Wan Hai add capacity to Asia-US networks
21 Jun 2022
Mediterranean Shipping Co. is bringing a new Asia service to the US Gulf and East coasts and revamping two other trans-Pacific services with additional calls amid slowing, but still growing, imports from Asia.

Savannah berth work causes vessel backlog to swell
01 Jun 2022
A backlog of vessels is building off Savannah, but the Georgia Ports Authority says it’s in a better position to handle the heavy volumes now than it was when delays hit last fall.

Savannah prepping for summer volume surge despite softening outlook
18 May 2022
COVID-19 lockdowns in Shanghai may not result in a sudden flood of volumes to the US, but the GPA says additional storage capacity at Savannah’s Garden City Terminal and pop-up storage sites will allow it to handle any unexpected spikes.

Falling dray rates push Savannah truckers back to larger fleets
13 May 2022
Port truckers who left to start their own companies in Savannah last fall are re-engaging with former employers as they struggle to find loads to haul amid the recent decline in dray rates.

SE ports anticipate import surge, anchored vessels this summer
11 Apr 2022
Officials at the busiest ports in the southeast US believe import volumes will grow through the summer, meaning vessels will continue to anchor outside the major gateways.

Savannah expansion projects receive influx of cash
30 Mar 2022
The Port of Savannah has received more than half a billion dollars to grow its container and ro-ro capacity and provide options to importers and exporters to relieve pressure on the South Atlantic Chassis Pool.

OOCL’s rail-sea service rerouted from Russian port
11 Mar 2022
OOCL’s Rail-Sea service to the US East Coast has been shifted away from a Russian transshipment port and instead is using a route through Poland amid the ongoing war in Ukraine.

Disruption forcing US importers to take greater control of landside logistics
02 Mar 2022
As container lines pull back on inland point intermodal (IPI), US importers are rethinking their landside delivery plans and containerized freight is moving further inland before being deconsolidated.

Changing ship calls along US Southeast roil exporters
25 Feb 2022
Ocean carriers have been bouncing ship calls between Savannah and Charleston due to the congestion affecting both ports, but the moves present a logistical challenge for exporters.

Savannah dredging wrapping up, but capacity expansion will continue: GPA
24 Feb 2022
The Port of Savannah will compete dredging work within a couple weeks to deepen its harbor to 47 feet and expand storage capacity by 2.7 million TEU by 2024, the Georgia Ports Authority said Thursday.

New container slots, pop-up storage help Savannah navigate rising dwells
07 Feb 2022
The Port of Savannah has cleared the backlog of vessels outside its harbor and is considering developing additional pop-up storage sites outside Georgia to keep the port fluid in the coming months.

GPA extends pop-up yard leases to aid Savannah
25 Jan 2022
The Georgia Ports Authority will extend the use of pop-up storage sites another three months through April, citing the success of the off-site locations in whittling down the vessel backlog in Savannah.

Savannah project reflects growing premium for US berth space
24 Jan 2022
Savannah’s $250 million berth extension will ultimately increase the port’s capacity and reflect the increased pressure on major US ports to maximize their docks amid increased demand, both from regular services and extra-loaders.

Outlook 2022: US Southeast ports lay groundwork for congestion mitigation
12 Jan 2022
Several Southeast ports will expand container capacity in 2022, but the question for most is when will Savannah clear all the anchored vessels outside its harbor?

Savannah vessel backlog dwindles as new terminal JV debuts
03 Jan 2022
The number of vessels anchored outside Savannah has fallen to fewer than five, a significant improvement from September when the number was as high as 30.

East Coast ship backlog low as West Coast diversions rise
30 Dec 2021
The Port of New York–New Jersey is seeing an uptick in ships waiting for an open berth as vessel calls rise and more freight gets diverted from other ports.