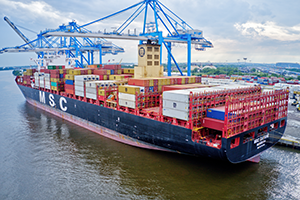 The Port of Philadelphia is one of the biggest fruit and perishables ports in the United States thanks to its proximity to so much of the U.S. population and its location above the 39th parallel, below which U.S. importers are not typically allowed to import certain fruits and vegetables from Latin America because of fears over pests. The U.S. federal government is currently running a pilot program to allow imports of those perishables below that point on the map.

How to Improve OTIF: 15 Tips for On Time and In Full Delivery
END_OF_DOCUMENT_TOKEN_TO_BE_REPLACED 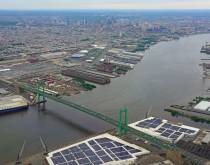 21 Jul 2022
The Port of Philadelphia is prioritizing the densification of the Packer Avenue Marine Terminal and looking to open new near-dock storage as it readies for post-Panamax ship calls.
MORE »

Philadelphia offers incentives to attract more container cargo
27 Feb 2015
A new incentive program for ocean carriers at Philadelphia could bring more than 1 million new containers through the city’s Delaware River terminals over the next five years, according to the Philadelphia Regional Port Authority.
Philadelphia reports double-digit container growth
29 Jan 2015
Container volume at the Port of Philadelphia jumped 22.2 percent last year as the port recorded its fifth consecutive year of double-digit growth in total cargo volume.
Port of Philadelphia receives 16 proposals for long-delayed cargo complex
18 Nov 2014
The Philadelphia Regional Port Authority said it has received proposals from 16 potential investors in one or more parcels at Southport, a waterfront site where the port authority hopes to develop cargo-handling facilities.

Mexican produce exporters push ocean route to Philadelphia
30 Oct 2014
A group of Mexican produce and meat exporters are sold on the idea of starting weekly ocean service between the ports of Veracruz, Mexico, and Philadelphia, saying it would be faster, cheaper and provide better security and cargo integrity than current trucking routes.
MSC to continue Boston-Philadelphia services outside 2M
23 Oct 2014
Aided by a Pennsylvania incentive program, Mediterranean Shipping Co. will continue to operate a direct service between North Europe and Boston and Philadelphia alongside its forthcoming 2M Alliance with Maersk Line.
Philadelphia seeks developers for Southport terminal
01 Oct 2014
Development of Philadelphia's Southport Terminal Complex officially kicked off today as the Philadelphia Regional Port Authority released a Request for Expressions of Interest for the 200-acre site.

Philadelphia port seeks proposals for 200-acre site
17 Sep 2014
The Philadelphia Regional Port Authority is seeking “expressions of interest” from potential developers of Southport, a 200-acre Delaware River waterfront site where a container terminal had been planned.

West Coast Volumes Growing Fastest This Year
20 Nov 2013
Container volumes handled by U.S. West Coast ports grew more than three times faster than those at East Coast ports in the first eight months of the year, as lingering effects of last year’s labor negotiations and computer problems at one of the biggest terminals in the Port of New York and New Jersey dragged down overall throughput growth.
ILA, Virginia Employers Resume Local Talks
20 Aug 2013
International Longshoremen’s Association President Harold Daggett and other ILA officials met with employer representatives Tuesday in an effort to reach agreement on a local contract covering about 1,650 dockworkers in the Port of Virginia.

Delaware River Ports Drumming Up New Business
02 Aug 2013
The planned two-berth terminal at Southport in South Philadelphia, which will have an estimated cost of $300 million to $400 million, will have a target capacity of 750,000 20-foot-equivalent container units annually when fully built out. Together with the 450,000-TEU Packer Avenue Marine Terminal, Southport will give the Port of Philadelphia total capacity of some 1.2 million TEUs.

Argentinian Ambassador Optimistic US Will Lift Ban on Lemons
06 Nov 2012
The Argentinian ambassador to the United States is optimistic that the decade-long U.S. ban on lemons from his country will end next year.
Maersk Line Diverting Cargo Bound for NY-NJ
02 Nov 2012
Maersk Line is diverting container ships that were scheduled to call at the hurricane-battered Port of New York and New J

Northeast Ports React As Sandy Takes Aim
29 Oct 2012
Seaports from New York to Virginia remained closed Monday as the Northeast and the mid-Atlantic braced for the huge hurricane that was slowly turning west and menacing the coastline.
Trucking Hits Brakes for Hurricane Sandy
29 Oct 2012
As Hurricane Sandy approaches landfall on the East Coast, truckers should use extreme caution in the Mid-Atlantic and Northeast — or simply stay off the road.