The Port of New York and New Jersey is the busiest container port on the East Coast of the United States. Its terminals are located throughout the New York metropolitan area including Newark, New Jersey. The largest terminal in the port is operated by Maher Terminals.

The Port’s volume growth is driven by the fact that so many vessels make their first U.S. calls at the Port of New York and New Jersey. One-third of the nation’s GDP is produced within 250 miles of that port.

Following the opening of the ExpressRail facility at GCT Bayonne terminal in New Jersey, the Port’s fourth on-dock rail site gives shippers out of that terminal extended reach into Midwest, Southern and U.S. Northeast markets.  GCT Bayonne’s electronic appointment system has also slashed turn times to the extent that dual transactions can sometimes be completed in an hour compared with twice that or more in the past.

US Offshore Wind: Where Is the Market Heading?
Learn how IFP Corp uses technology to improve operational efficiency and improve margins
END_OF_DOCUMENT_TOKEN_TO_BE_REPLACED

The US-China Trade War: Where Do We Go From Here?
END_OF_DOCUMENT_TOKEN_TO_BE_REPLACED 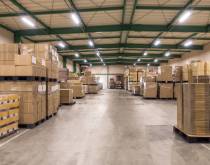 16 Jan 2020
Any initiative to extend the marine terminal gate hours at the Port of New York and New Jersey would likely need to address the fact that many small and medium-sized warehouses that serve the port operate only during the day.
MORE »

Infographic: Projects boost truck fluidity at NY-NJ port
07 Jan 2019
A passel of newly finished and ongoing projects aim to smooth the trucking of cargo in the Northeast US.

NY-NJ port extends gates to handle backlog
03 Jan 2019
The extended gates, intended to clear a short-term logjam, come amid an ongoing debate among port stakeholders about whether the terminals should open for longer hours to improve cargo fluidity.

NY-NJ longshore hiring to support auto handling
11 Dec 2018
Employers at the Port of New York and New Jersey plan to hire a substantial number of longshoremen for auto and cruise work, among other work needs.

Port NY-NJ launches upgraded portwide portal
19 Nov 2018
The dashboard, which went online Monday, is an upgraded and streamlined version of the port’s four-year-old PortTruckPass website that was created by a consortium of the operators of the six terminals in the port to collect and disseminate logistical information.

APM Terminals responds to NY-NJ port congestion
14 Nov 2018
The terminal operator at the Port of New York and New Jersey is implementing several measures after a month of longer-than-reasonable turn times for truckers.

APM Terminals extends NY-NJ port gate hours
07 Nov 2018
The terminal, which does not normally process trucks and containers on the weekend, opened the gates Saturday from 6 a.m. to 1 p.m. and plans to do so every Saturday until the end of the year. Furthermore, the first Saturday’s turn time reduction was substantial.

New NY-NJ port chief needs to be 'nimble,' politically savvy
01 Nov 2018
The port may find its modest salary compared with other port directors and nuanced politics may challenge recruitment.

NY-NJ to test electric straddle carrier to cut emissions
31 Oct 2018
The port said it is working with Maher Terminals and Port Newark Container Terminal, the two terminals in the port that use straddle carriers, to create a vehicle that would be programmed to recharge itself after making a certain number of container moves.

Agreement cements future of NY-NJ’s Red Hook terminal till 2021
19 Oct 2018
The deal between operator Red Hook Terminals and the Port Authority of New York and New Jersey gives the operator a second five-year operating term if both sides agree, and means the company will "provide uninterrupted service" to its customers.

Projects boost truck fluidity at NY-NJ port but more needed
18 Oct 2018
The Port of New York and New Jersey has a slew of infrastructure projects recently completed and in the pipeline to meet rising cargo volume. The overriding question is — will they be sufficient?

Industry leadership needed to helm NY-NJ port
05 Oct 2018
In the decade ahead, the Port of New York and New Jersey will face intensifying competition — from multiple ports — for discretionary cargo. With the authority’s head of seaport departing, the moment requires the hiring of a leader with in-depth knowledge and experience overseeing container cargo moves through a complex, multimodal system.

NY-NJ port downplays fears over impact of new drayage rules
03 Oct 2018
The port authority, after discussions with rule-implementer the New Jersey Department of Labor, is disseminating detailed information to truckers on the new rules, which the authority believes will have little impact on the drayage fleet and won’t affect many truckers.

Port NY-NJ looks at staging space to boost rail fluidity
02 Oct 2018
The Port of New York and New Jersey is looking for ways to increase the storage space for empty rail cars to prevent shortages as discretionary cargo volumes rise.

NY-NJ port expands barge strategy
01 Oct 2018
The port and government officials have created an advisory committee, called the North Atlantic Marine Highway Alliance, to stimulate barge use and reduce truck traffic and the pollution and congestion it creates.

NY-NJ moves toward interoperable chassis pool with new IEP
26 Sep 2018
The addition of Milestone Equipment Holdings to the OPEN Choice Equipment Agreement-North East pool would take the pool a step closer to a pool of chassis from several providers that would be “interoperable,” meaning that truckers could pick up or drop off chassis from more than one provider at one or more locations.

New labor classification law at NY-NJ prompts trucker concern
20 Sep 2018
The Teamsters union, which pushed for the rule change, believes a large proportion of the port’s trucker owner-operators could be found to be employees under the new rule. Truckers say the impact could range from merely creating an “administrative headache," to prompting some to leave the port, and perhaps the industry.

NY-NJ's Waterfront Commission to argue for end of agency dissolution case
17 Sep 2018
The law and the complaint suit are the latest salvos in the ongoing dispute between the commission on one side, and on the other the New York Shipping Association and the International Longshoremen’s Association, over the commission’s role at the port. Both sides contend that they are trying to correct problems that can hinder the smooth operation of the port and therefore the cost-efficient flow of shipper’s cargo.

US West Coast truckers turn to owning, leasing chassis but extent unclear
17 Sep 2018
As the US chassis sector evolves, no one method of operation fits all ports/regions, but one appears to offer truckers an advantage.

NY-NJ ports chief to leave, triggers nationwide search
05 Sep 2018
Molly Campbell, who joined the authority as head of the ports in July 2015, will leave on Oct. 26, departing as the nation’s third-largest port is seeing growing cargo volumes and more mega-ships.

Top US port gateways expand share of Asian imports
31 Aug 2018
The key to the top-tier ports’ dominant share of Asian imports is that ocean carriers have chosen the four gateways as the first call inbound on their services from Asia. And that ensures that retailers and other large importers receive what they value most.

NY-NJ probes impact on warehouses of extended terminal hours
24 Aug 2018
There are two unknowns in the extended gate hours issue, and the answer to those will say much about the suitability of the hypothetical project.

New York-New Jersey barge projects get federal boost
14 Aug 2018
A grant, for two projects, reflects the ongoing effort by the Port of New York and New Jersey, the East Coast’s largest port, to boost the use of barges and reduce the volume of trucks on roads in and around the port area, curbing pollution.