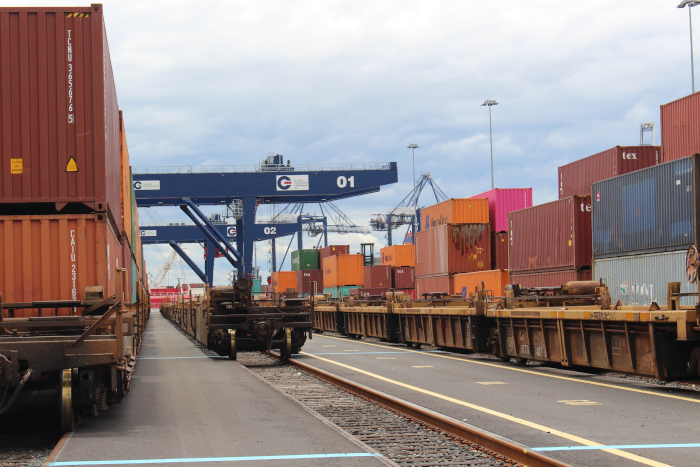 The new rail terminal at GCT Bayonne in the Port of New York and New Jersey is expected to help the terminal attract more discretionary cargo, in part with a two day dwell time. Photo credit: Hugh R. Morley.

Staking a larger share of Midwest cargo handled by West Coast ports, GCT Bayonne aims to more than double the share of rail lift through the completion of a $149 million project at its container terminal in the Port of New York and New Jersey.

Railed cargo jumped by one-third since the first phase of the terminal's rail project opened in January, raising the share of railed cargo handled by the marine terminal from 6 percent to 8 percent. The near-dock terminal, with a capacity of 250,000 lifts per year, will increase the capacity of New York-New Jersey’s rail system to about 1.5 million lifts per year.

“It’s easy to think that we are targeting cargo on the East Coast … People think, ‘Oh, you're going after Norfolk's cargo,' or from other ports on the coast," said John Atkins, president of GCT USA. “We're going after the West Coast.”

The rail project furthers the port’s larger goal to boost its handling of cargo destined and originated in the Midwest. With approximately 15 percent of cargo moved by rail — a barometer of a port’s reach into the interior — the Port Authority of New York and New Jersey (PANYNJ) want to increase that share to 20 percent.

Beth Rooney, the authority's deputy port director, said the terminal would be an important part in reaching that goal — taking the port’s rail capacity to 1.5 million TEU, which she said is the largest capacity of any port in the country. To be competitive, any terminal needs to have a rail service, she said.

The new rail terminal, set to be fully operational next week, includes 9,600 feet of track and two lead tracks that tie the terminal into the rail networks of Norfolk Southern Railway and CSX Transportation. It currently receives five trains a week. Atkins said he is looking to increase rail’s share of the terminal’s cargo to 18 percent in the long term.

Prior to the terminal’s creation, GCT Bayonne drayed cargo to and from the port’s ExpressRail terminal shared by Maher Terminals and APM Terminals in Elizabeth, with a four-day dwell time, Atkins said. But only a small portion of the terminal’s rail cargo now goes through the Elizabeth Terminal, with the rest going through the new terminal, where the dwell time is only two days, he said.

Other ports across the US are putting a similar emphasis on using rail to reach into inland markets in the center of the country. Moving cargo by rail is seen as a way to curb the growth in truck use — and pollution — as vessel and cargo discharge sizes increase, straining logistical resources and creating congestion.

Container volume through New York-New Jersey grew 4.8 percent year over year in the first four months of 2019, to 1.68 million loaded TEU, according to PIERS, a sister company of JOC.com within IHS Markit. The number of lifts, in turn, increased much faster over the same period, rising 8.6 percent to 220,044 lifts, according to figures from PANYNJ.

Atkins said the key to the GCT Bayonne rail terminal’s growth will be in showing that the new facility, in conjunction with the railroads’ service, can provide a faster, more efficient competitor to West Coast ports for cargo to and from the Midwest. That effort is helped by the fact that carriers increasingly opt to make New York-New Jersey the first port of call in the US, enabling shippers to move cargo swiftly to its destination.

“So, cargo that's going inland, when you hit New York, you take it off the ship and it get it onto the rail, and it's already moving inland to its final destination before they hit the second port,” Atkins said. In addition, one of the services stops in Bayonne, then moves down the East Coast and returns to Bayonne, giving exporters a speedy option if they go through the terminal, he added.

Consumer shippers are pulling rail imports through GCT for Chicago delivery, while auto parts are imported and exported via the terminal to and from Detroit plants, Atkins said. Railed exports of agricultural products from Ohio have also been strong, partly thanks to Bayonne being the last port of call on one service, he said.