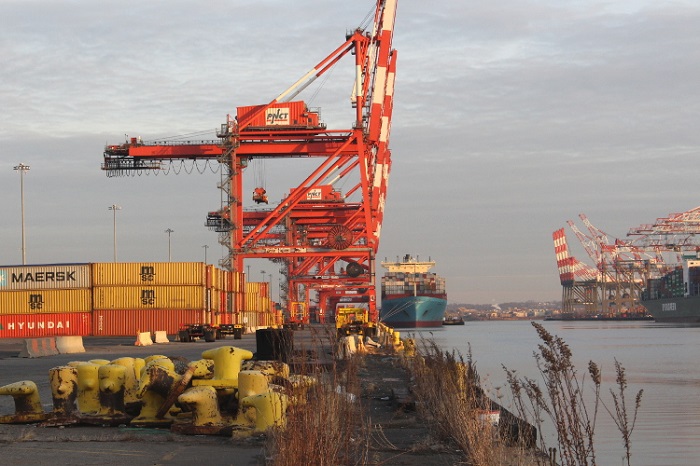 The rapid progress of a $500 million upgrade at the Port of New York and New Jersey's Port Newark Container Terminal (above) could attract shippers that are closely focused on speed and efficiency. Photo credit: Hugh Morley.


A state-of-the-art gate system promising to shave a quarter off of the average trucker turn time at Port Newark Container Terminal (PNCT) at the Port of New York and New Jersey will come online this spring, part of $500 million upgrade to prepare the facility for an anticipated surge in mega-ship calls.

When the system goes online in late April or early May, trucks that at present stop three times on their way through the Newark-based terminal — arrival, equipment inspection, and slot and container assignment — will have to stop only once, the terminal management said. That is expected to substantially increase the flow of vehicles through the terminal.

The gate system is part of a terminal-wide project that includes expanding the terminal’s 263-acre footprint, improving its electrical, global positioning and wi-fi equipment, and adding four, super-post-Panamax cranes, which are due to arrive in 2018. Additional new straddle carriers are also set to arrive this year.

The project gained a boost in December when the company closed on $298 million in tax-exempt bonds facilitated by the New Jersey Economic Development Authority, just under half of which will fund the project. The remainder will be used to refinance existing debt.

“We are planning on the future,” said James Pelliccio, CEO/president at Port Newark Container Terminal, LLC, which operates the terminal. “This bond provides us with the capacity to complete the projects that we just went through and we believe positions us very, very strongly for the next 10 years.”

“I am bullish on the fact that if we perform, we will grow,” Pelliccio said, adding that the terminal at present handles 20 percent of the cargo that moves through the port, which handled 4.8 million TEU in 2017. “It’s a dramatic change. What was at one point a very inefficient footprint, goes into one of the most modern and efficient footprints” in the port, he said.

By the end of the year, the project will have increased PNCT’s capacity from 1.5 million TEU, of which the terminal utilizes on average 87 percent, to 2 million TEU, with an increase to 2.3 million TEU by the end of 2019, according to PNCT officials. A wharf improvement project, including the dredging of 400 feet of berth space, will enable the terminal to handle two 14,000 TEU vessels at a time, instead of one at present.

Once the gates are completed, the terminal expects to introduce an appointment system, although the pressure to do so immediately is lower now than, say, two years ago, because the expansion means truck flow will significantly improve anyway, Pelliccio said. Terminal officials say the average turn time at present is 45 minutes, from a truck’s entry through the terminal gate to its departure.

“At some point, we will do it,” he said of the appointment system, adding that it will be done when it is needed. “The appointment system will be a natural progression as we complete the new gate and expansion of the terminal footprint.” Last week, the terminal quietly launched a pilot program in which customers could pay a $95.50 per container fee to secure one of the first 50 slots of each day.

One of several port expansion projects

The upgrade is the largest of several projects unfolding across the port to handle expected growth in cargo volumes as a result of the opening of the elevated Bayonne Bridge in June and the completion of the expansion on the Panama Canal a year earlier. The elevation of the bridge, from 151 feet to 215 feet, enabled ships of greater than 9,500 TEU to reach three of the port’s four main terminals — among them PNCT — for the first time.

The bridge raising and canal expansion are expected to bring a surge of larger ships to the port, testing its logistical capabilities with intense bursts of activity that require large volumes of cargo to be loaded or unloaded in a short space of time. So, far, however, although cargo volumes have risen at the port, as they have along the East Coast, terminals have not seen a dramatic rise in either the number of big ships arriving or in the cargo they have brought. Cargo volumes at the Port of New York and New Jersey increased by 5.5 percent in 2017, compared with an increase of 7.7 percent on the East Coast as a whole.

Projects underway or in the works elsewhere in the Port of New York and New Jersey include a new gate system and berth refurbishment and dredging at APM Terminals in Elizabeth, and a planned dredging project that will add a berth at Maher Terminals, according to the New York Shipping Association. Global Container Terminals (GCT) Bayonne is expected to complete the construction of a near-dock rail ramp in the fourth quarter of 2018 that will be its first ever rail link.

Fifteen months ago, GCT Bayonne introduced a pilot appointment system in the first two hours of the day that was so successful that it has since been expanded to cover the first seven hours of the day. The terminal operator says turn times are now 45 percent lower during the appointment period than in the period when no reservation is needed. Aside from PNCT, APM Terminals is expected to introduce a similar system.

After the opening of the elevated Bayonne Bridge, PNCT handled 24 ships in 2017 that could not previously fit under the bridge — all more than 10,000 TEU — and another eight of that size in the first seven weeks of 2018. The ships “support the Far East trade lane and typically discharge 2,200 containers and load back 2,250-2,500 containers,” the terminal said. “Logistically, the PNCT management team had to ensure sufficient discharge space was allocated to import volumes and also export staging had to be fine-tuned to ensure maximum yard utilization while maintaining productivity targets.”

PNCT officials say they have already invested $250 million in the terminal, and are well on the way to fulfilling a requirement in the terminal’s lease with the Port Authority of New York and New Jersey to spend $500 million on improvements by 2029, which will enable PNCT to occupy the facility until 2050.

Unlike most other port projects, however, PNCT has been able to expand its footprint, as well as improve efficiency. Space close to the port is in such short supply that leasing rates have shot up by nearly 40 percent over the last six years, helping to push rates to close to $10 per square foot in the port center. However, PNCT has in recent years acquired the lease of 46 acres of land, boosting the footprint to a total footprint of 309 acres, and enabling the terminal to expand its container stacking capacity by 50 percent. In November, the terminal acquired 16.5 acres of land, to be used for further expansion of the terminal yard stacking area.

The extra space has improved terminal efficiency and cut down the distance that vehicles travel to complete container moves, said Pelliccio.

“This configuration alone allows us to take 160,000 straddle carrier miles off the terminal” each year, with a significant reduction in the environmental impact, he said.

PNCT sees a key strength in competing with other terminals in the port, and on the East Coast, in its rail capacity, which at present accounts for 25 percent of the terminal’s cargo volume — well above the 16 percent for the port as a whole. While the port will always be the entry point for much of the cargo destined for the vast New York regional market, the ability of the port and its terminals to attract discretionary cargo that is headed to or from the Midwest is expected to be a key factor in determining the port’s future growth. And much of that will be moved by rail.

As part of the lease agreement, the port in 2013 completed a bridge linking the terminal with its rail yard, which today has 10,000 feet of working track. The bridge removed 1,000 trucks per day from port roads that used to leave the terminal and drive to the yard from area streets, said Pelliccio.

“That used to be a 35 to 40 minute dray,” he said, adding that the trip can now be done in less than 10 minutes. “That frees up capacity at the port, and makes it very efficient for us here at PNCT.”