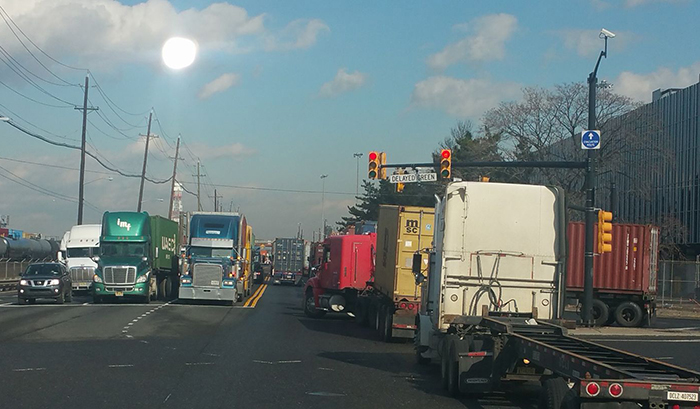 Trucks wait in traffic outside terminals of the Port of New York and New Jersey. Photo Credit: Port Driver

Port Newark Container Terminal, one of the four main terminals at Port of New York and New Jersey, suffered heavier than usual truck congestion for the fourth day in a row Thursday, blaming severe weather for hampering the unloading of three ships simultaneously.

Heavy rain over the weekend pushed the vessels off schedule and caused “bunching” and “volumes to spike significantly,” a spokesperson told JOC.com. As a result, the terminal had to remove 5,000 containers in two days, which forced the terminal to handle a “record volume,” she said.

The Association of Bi-State Motor Carriers in a message to its members Thursday afternoon, said, “conditions are expected to remain challenging” until Monday or Tuesday, based on discussions with the terminal and the Port Authority of New York and New Jersey.

The congestion reflects the difficulties at the heavily used port, where turn times can easily rise above two hours, as it works to ensure the swift and smooth arrival of trucks and containers in and out of the port in preparation for the arrival of increasingly larger ships. That is expected to happen once a project to elevate the Bayonne Bridge is completed at the end of 2017. At present, the low elevation of the bridge prevents big ships passing below and reaching three out of the four terminals — among them PNCT.

Last month, another terminal in the port — Global Container Terminal in Bayonne, New Jersey — launched a reservation system in which trucks arriving early in the day must have an appointment to get into the terminal. Authorities and terminal operators are closely watching to see the effectiveness of the initiative, one of several methods under consideration by port authorities seeking to reduce turn times.

The traffic at PNCT prompted the Port Authority from Monday to Thursday to issue a special alert each day warning truckers of “heavy gate volumes” at the terminal. Port police at times limited the traffic getting into the road leading to the terminal.

The Association of Bi-State Motor Carriers, in a message to its members Thursday afternoon, said it had heard “concerns over the queues and wait times” on the “approach” road to PNCT for several days from members. The high volume coincided with the terminal having to move the entrance and departure gates owing to ongoing construction improvements “which has reduced the area available for truck queuing,” the association said.