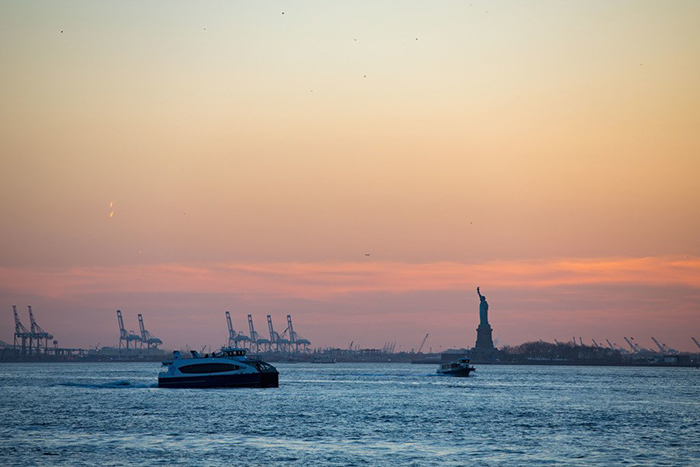 Forecasting a 68 percent rise in cargo traffic by 2045, authorities and freight industry stakeholders around the Port of New York and New Jersey aim to enhance rail systems, add barge routes, and make more efficient use of port facilities to mitigate the truck traffic and the pollution it causes.

New York City officials this week released a $100 million plan to “overhaul the city’s aging freight distribution systems,” as the Port Authority of New York and New Jersey puts the finishing touches to a master plan that is expected to reshape aspects of the East Coast’s largest port in preparation for growing demand over the next 30 to 40 years.

Loaded cargo volume through New York-New Jersey, the nation’s third-largest port, grew by 36 percent over the last 12 years, according to data from PIERS, a sister product of JOC.com. And the port authority expects it to grow by 4 percent a year in the next few years.

Preparing for the future, New York City also is looking to develop a container terminal in Brooklyn to be largely served by barges. And New York State last month awarded a grant of up to $21 million to CSX Transportation to create an inland port at the DeWitt Yard near Syracuse that will be tied by rail to the port.

In addition, the port authority — which completed a $1.6 billion project 12 months ago to raise the Bayonne Bridge, enabling vessels larger than 9,500 TEU to reach three of the port’s main terminals — has commissioned an environmental impact study to help choose from two proposals for getting cargo across the Hudson River. One is a tunnel and a rail-on-a-barge operation.

Both projects are designed to help get cargo across the harbor into the New York City boroughs of Queens and Brooklyn, and Long Island. An earlier phase of the study concluded that the barge project would remove 600 trucks daily from roads and highways around New York and the port, while the tunnel alternative would remove 1,500 trucks daily.

The city, state, and authority proposals, although conceived independently, focus on similar goals — how to expand the region’s freight network to more smoothly move cargo from key transportation hubs without further burdening already congested roads and adding to pollution.

Outlining its proposal, New York City Economic Development Corp. said that 90 percent of freight in the city’s “aging marine, rail and highway infrastructure” goes by truck, and predicted that local freight volumes would grow by about 68 percent by 2045. The city said that truck congestion and delays cost $862 million in 2017, and estimated that the cost would rise by 31 percent to $1.1 billion by 2045.

“A city with our robust waterways and railways shouldn’t be moving 90 percent of cargo by truck,” said Mark Chambers, director of the New York City mayor’s Office of Sustainability.

The city’s plan centers on developing new maritime and freight infrastructure to get cargo into the city, and “changing and modernizing how and where freight is stored for distribution and warehousing.”

On the marine side, the plan would creating a “hub-and-spoke” system in which freight would be transported from the port’s main container terminals in New Jersey on new barge routes to city destinations. It calls for the development of a barge terminal at the Hunts Point Food Distribution Center, one of the city’s biggest food markets, in the Bronx, and creating a barge terminal in the container terminal the city is building in Brooklyn, known as South Brooklyn Marine Terminal.

The plan also calls for the construction of new transload facilities in Brooklyn and Queens to provide industrial and food-related businesses with direct access to the national rail network, including the creation of new locations to transfer shipments from one mode of transportation to another. In another proposal in the report, the city would construct sidings to enable trains to pass each other more easily.

The city also pledged to support the development of freight hubs across New York City, and to build warehouse and transloading facilities through public-private partnerships. Two projects planned are 500,000 square foot “urban distribution center” at the Brooklyn Army Terminal and a four-acre air cargo and distribution facility at John F. Kennedy International Airport.

Molly Campbell, director of the port department at the port authority, said the city’s plan will complement those of her own agency, and those of the federal government and New York state.

“Increasing the movement of freight by rail is critical to this region,” Campbell said. “And this plan represents an important step in advancing this critical initiative.”

The authority is expected later this year to release a maritime master plan that will guide development of the port’s 3,000-plus acres of cargo-related property during the next 25 to 30 years. As conceived by the authority, the plan will compile a broad range of ideas on how to reconfigure port facilities to handle expected increases in volume and to maximize revenue. The project is expected to examine the port’s six container terminals as well as its auto, bulk, cruise, and adjacent real estate holdings, and support services and operations.

Loaded cargo through the port grew by 10.9 percent in the first quarter of the year, to 1.22 million TEU, outstripping the 6.5 percent increase on the East Coast as a whole, PIERS figures show. Loaded cargo volumes through New York-New Jersey grew by 6 percent in 2017 over the year before, to 4.77 million, as the East Coast volume grew by 6.2 percent.

The port, like those in other urban areas, has seen demand for real estate surge dramatically with cargo volumes in recent years, as shippers and logistics businesses have sought space, often in competition with e-commerce companies looking for space from which to distribute goods to New York and New Jersey consumers. Average lease rates in the heart of the Port of New York and New Jersey have in the last six years jumped 40 percent.

The port authority, which conducted outreach to solicit input from a range of stakeholders, is at present reviewing their recommendations, said spokesperson Steve Coleman.

“Once finished, we intend to do another round of stakeholder outreach and then release the plan in late 2018,” he said.