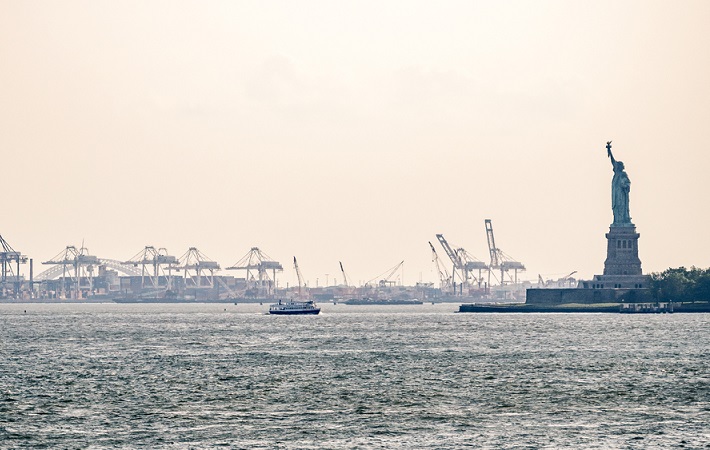 When traveling to or from the New York City area by plane, it would be inconceivable that someone would go through airports in Philadelphia, Hartford, or Boston except in an emergency. JFK, Newark Liberty, and LaGuardia airports, all controlled by the Port Authority of New York and New Jersey, have a virtual monopoly on air travel in and out of the largest US metropolitan area.

Similarly, when traveling between New York City and New Jersey by car or public transit, one couldn’t avoid the crossings operated by the bi-state port authority, whether the Holland or Lincoln tunnels, or the George Washington, Goethals, or Bayonne bridges. Monopoly positions go a long way to defining the port authority, where its airports, bridges, and tunnels accounted for 85 percent of operating revenue in 2017.

That makes it easy for the Port Authority of New York and New Jersey to view the seaport, which accounted for just 6 percent of revenue last year, in a similar light because most of its business falls into the same category of business that is guaranteed, or virtually so. Cargo destined for the metropolitan area isn’t required to arrive at the port, but the vast majority of it does because it’s the closest and cheapest route into the region’s wealthy consumer market.

In a negotiating tactic years ago, Maersk Line threatened to move its main East Coast terminal to Virginia, but the economics of a port so close to a major metropolitan area made it all but assured that the vast majority of locally bound cargo would arrive at the Port of New York and New Jersey. It still does today and will continue to for years.

But unlike with the airports and river crossings, the seaport doesn’t occupy a complete monopoly position. It must compete against increasingly aggressive competitors for so-called discretionary cargo that moves through the port to or from inland locations reachable through any number of East Coast seaports, not to mention those on the West Coast.

With local cargo growth expected to be relatively flat, this is the segment of cargo the port authority says it will rely on for growth in the coming years, according to a recent port presentation. And there is evidence that the port hasn’t been competing effectively for this segment of business.

New York-New Jersey’s market share of loaded containers within the Northeast and mid-Atlantic — which includes the ports of Virginia, Baltimore, Philadelphia, and Boston — dropped from 65 percent in 2010 to 59 percent in the first half of 2018, according to IHS Markit data. On imports, its share declined from 68 percent to 62 percent. If the port isn’t losing share in the New York area trade, that erosion must be coming from discretionary cargo.

Up ahead — an even more competitive container cargo market

The competition is only going to intensify. Virginia has made inroads with the Heartland Corridor double-stack rail route, which opened in 2010, allowing its total Northeast market share to edge up to 27 percent from 23 percent in 2010. Savannah broke ground this year on a major rail facility within its port complex that will extend its reach deep into the Midwest, encroaching on New York-New Jersey’s rail hinterland.

Already with six first inbound ports of call from Asia, Savannah, whose reach was traditionally limited to the Southeast, now must be added to the list of competitors for New York-New Jersey. And there may be more competition to come; One day, Baltimore may complete its Howard Street tunnel project, giving it double-stack rail capability into the Midwest as well.

The reason this is relevant for the port authority now is that it soon must find a replacement for the departing Molly Campbell as the head of the seaport. Being in the mix in the intensifying battle for discretionary cargo cries out for a leader with operating experience. In-depth knowledge and experience in how containerized cargo moves through a complex multimodal system, most of which the port does not directly control but needs to influence, is critical.

This is a reality that nearly all major US ports have acknowledged in the selection of their current leaders. Whether it’s Griff Lynch at Savannah (APM Terminals, Sea-Land), John Reinhart at Virginia (Maersk), Jim Newsome at Charleston (Hapag-Lloyd, Nedlloyd), Jim White at Baltimore (Puerto Rico Marine Management, Inc., Ceres Terminals), Gene Seroka at Los Angeles (APL), Chris Lytle at Oakland (CMA CGM, APM Terminals) or John Wolfe at the Northwest Seaport Alliance (Maersk, APM Terminals), ports consider operating experience as crucial in their ability to lead their diverse communities and to effectively compete.

The New York-New Jersey port needs a visible leader who can corral a fractious community of terminals, truckers, and cargo interests, and enable the port to communicate clearly to the market; lacking strong communication in prior years, the port often spoke with multiple voices.

That blunted what is often a positive message about progress on trucker appointment systems and about creating access for mega-ships and handling the cargo they bring with minimal disruption. Though truckers complain about wait times on social media, minimizing disruption was a key victory for the port in the months since the Bayonne Bridge elevation was completed in June.

This is a good opportunity for the port to make an important positive decision about its future.

the port must hire from

Permalink Submitted by tim@lancasales.com on Oct 8, 2018 9:26AM EDT
the port must hire from within. we have plenty of local talent that know the lay of the land.

How to Improve OTIF: 15 Tips for On Time and In Full Delivery
END_OF_DOCUMENT_TOKEN_TO_BE_REPLACED