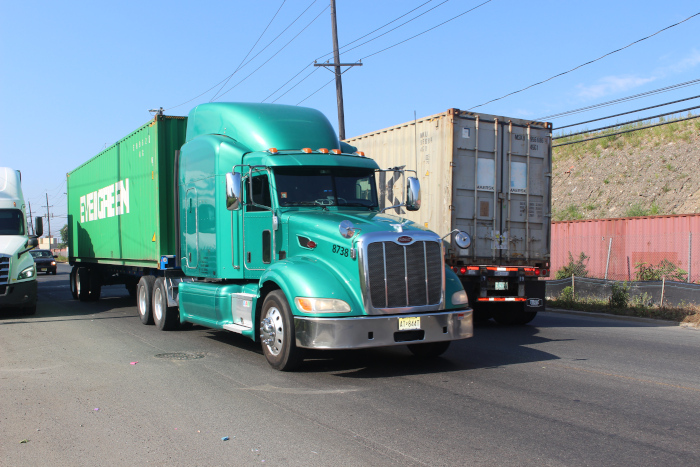 Trucking companies in the Port of New York and New Jersey fear that a proposed bill in the New Jersey Legislature would make it harder for drivers that want to remain independent contractors, rather than employees, to do so. Photo credit: Hugh R. Morley.

New Jersey lawmakers are rapidly advancing legislation that would reshape how the state determines whether thousands of Port of New York and New Jersey truckers are independent businesses or employees. Another hearing on the bill is scheduled for Monday, the second in five days.

The legislation pits the Teamsters union, which supports the bill, against trucking companies, who aggressively oppose it because they say it could weaken the port drayage fleet and result in a cargo slowdown at the port. Both the Association of Bi-State Motor Carriers and the New Jersey Motor Truck Association oppose it, and among other groups opposing it, in a lesser capacity, is the New York Shipping Association (NYSA).

The bill, which both opponents and supporters say is similar to California’s controversial AB5 bill that will take effect Jan. 1, would redesign the existing test for evaluating whether a worker is an employee or independent contractor, and shift the burden of proof on the worker to demonstrate they are not an employee. If approved Monday, the bill, which was introduced Nov. 7, could need just two more votes to land on the desk of Governor Phil Murphy.

The bill is the latest battleground in New Jersey over the classification of workers, which has riled port truckers who say it could diminish the drayage fleet. About 90 percent of the fleet are owner-operated trucks, according to the Association of Bi-State Motor Carriers, which opposes the bill.

James H. Cobb Jr., the director of government affairs for the NYSA, told the committee Thursday that making it more difficult for employees to become or remain owner-operators would result in “likely driver shortages.”

“A slowdown of cargo velocity caused by a shortage of port drayage drivers would be problematic for economic growth in a vast number of industries in New Jersey,” Cobb said, adding the logistics, commercial real estate, retail, and e-commerce business industries rely on efficient port operation.

But representatives of the AFL-CIO and Teamsters said employers use the independent contractor designation to avoid paying healthcare and insurance costs. Employers, they said, also avoid the requirements of federal overtime laws for employees, while shifting the burden of paying fuel, taxes, tolls, truck repairs, and truck purchase payments to the drivers.

“If these drivers were properly classified, these costs would be that of the employer,” said Fred Potter, vice president at large for the Teamsters and president of Local 469 of the union. He added that misclassification also prevents workers “from exercising the rights to join a union.”

Under the proposed bill, the second prong is shifted so that the worker can no longer be considered exempt from the assumption that they are an employee just because the work is done outside the place of business that contracts them. The law would allow exemption in the third prong only if the worker is in the same trade or occupation as the contracting company.

At Thursday’s hearing, Michael Divirgilio, senior vice president of operations at TOLL North America, a freight management company, said it backs the bill because the company believes it will provide a fair playing field as it seeks to grow its fleet of 100 employee drivers. He said the company, which works with unions, has a tough time competing in the New York-New Jersey market as it is.

“The playing field in the drayage industry is currently operating on a distorted slope where companies like TOLL are at the lower end struggling to compete against artificially low labor costs,” he said. “Many companies we compete against operate under an independent contractor business model that routinely violates New Jersey labor laws, resulting in an unacceptable working conditions for many poor drivers who cannot earn a living wage.”

But Eric DeGesero, a lobbyist for the New Jersey Motor Truck Association, said the bill would strip away the flexibility that trucking companies rely on to quickly increase their capacity when ships come into port.

“You can't ramp up quickly enough by keeping enough employees on staff all the time,” he said. “This bill takes that away to the detriment of both entrepreneurs and the economy.”