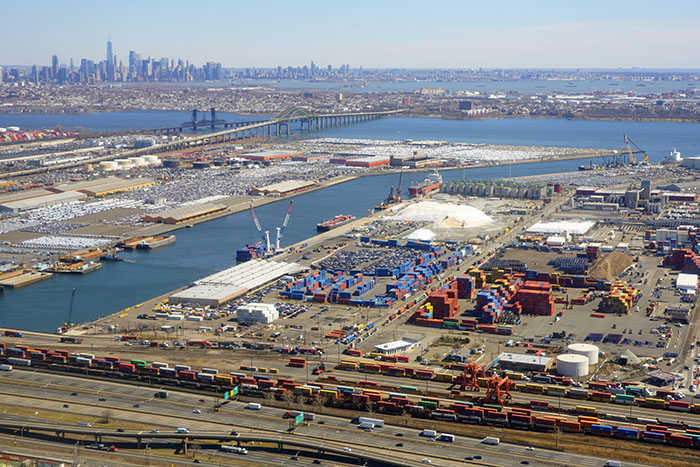 The local consumer economy served by the Port of New York and New Jersey is the largest in the United States and, by some estimates, the second-largest globally behind Tokyo. Photo credit: EQRoy/Shutterstock.com.

The Port of New York and New Jersey has always had the luxury of resting on its laurels. The local consumer economy it serves is the envy of any port: the largest metropolitan economy in the United States by a long shot and, by some estimates, the second-largest globally behind Tokyo.

Much higher per-unit trucking and rail costs versus ocean make it completely impractical to serve the New York metropolitan region through any other port gateway. In the late 1990s, Maersk and Sealand sought bids from competitive ports in what was seen as a transparent negotiating tactic for better terms from NY–NJ, when in reality it was inconceivable that the local area could be served at scale from any of the seven ports — including Norfolk and Baltimore — from which the carriers had sought proposals. Today, with the port having invested billions to dredge the harbor to 50 feet and raise the Bayonne Bridge, thus able to easily handle ships of 15,000 TEU, NY–NJ is a fortress.

But that doesn’t mean it’s not vulnerable at the margins, and this reality is increasingly dominating the thinking of port authority management under former NYK Line, Nike, and Port of Portland executive Sam Ruda, who was appointed ports director for the authority in April, and the aggressive senior leadership under executive director Rick Cotton.

After many years in third place, the port in May reclaimed the second-largest US port position behind Los Angeles in terms of total throughput, and has kept that position since then. But while it’s been a beneficiary of the nearly two-decade shift in container cargo from the West Coast to East and Gulf coasts, in part due to a history of longshore labor peace (outside a one-day wildcat strike in early 2016), versus a chronically disruptive West Coast, its growth has not kept pace with ports in the Southeast. NY–NJ increasingly is locked in competition with those ports, particularly Savannah and Norfolk, for discretionary cargo moving inland via rail.

Ruda and Cotton in a recent interview made multiple references to the need to be competitive for hinterland cargo, saying that shipments bound for inland destinations discharged at NY-NJ will arrive at their destinations even before the ship arrives at subsequent East Coast ports. That is especially an advantage given that 76 percent of the port’s services are currently “first-in” calls. The need to be competitive for hinterland cargo is an acknowledgment the port had rarely made in the past, possibly because at less than 6 percent of overall port authority revenues the industry wondered to what degree the port authority was focused on the seaport.

The port is thinking in practical terms about how to improve its competitiveness. Part of the effort to improve intermodal service out of the three intermodal rail facilities, Ruda said, will be to seek to attract Midwest agricultural exports, which will reposition more equipment into the port that can in turn be made available for imports.

The interview itself was a sign that a new and more assertive regime has taken hold at the port. Overly outsourcing core operations to private operators was a painful lesson the port authority learned during a 2018 winter storm at JFK International Airport that left thousands stranded, and the experience is informing the port’s thinking regarding its oversight of private lessees, including at the seaport. The port said that was evident when it intervened earlier this year to relieve pressure on congested marine terminals.

“At both the port and at the airports, where that model of utilizing private operators is in place, the agency really has to exert influence,” said Cotton.

In other words, if being a landlord port in the past meant taking a largely hands-off approach to port operations, that is changing, especially when it comes to influencing areas such as truck turn times and make greater use of existing terminal capacity, both high priorities for the port.

“The next iteration of efficiencies are really going to be about the flow, in and out of the terminals. I think it's going to obviously necessitate longer hours,” Ruda said. “We're going to have to utilize the capacity that we have more efficiently. And I think that's really the punchline for the port.”

For example, there is progress in the area of truck appointment systems, which truckers long resisted but have warmed to since the first of those systems went into effect at Global Container Terminal in Bayonne in 2018, with APM Terminals likely the next terminal to go this route.

Messrs Cotton and Ruda have

Permalink Submitted by lalankllr@gmail.com on Nov 19, 2019 8:51PM EST
Messrs Cotton and Ruda have articulated the opportunity to achieve the growth and potential that NY/NJ ports have always had due to their dominant local markets, first call attractiveness and rail connections to the Midwest. Until recently, it has largely been left to their port competitors to the south to capitalize on hinterland cargo through their superb planning and execution. The potential for NY/NJ to claim the share that they seek is there and Cotton and Ruda have articulated it well . Hopefully they will continue to energetically pursue the goal and will be given the political support and resources necessary to fulfill their vision.
Port News›US Ports›Port of New York and New Jersey
North America›United States
North America›United States›New Jersey
North America›United States›New York