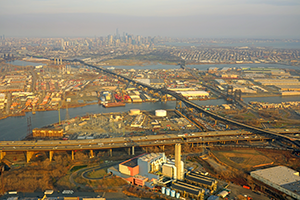 The Port of New York and New Jersey is the busiest container port on the East Coast of the United States. Its terminals are located throughout the New York metropolitan area including Newark, New Jersey. The largest terminal in the port is operated by Maher Terminals.

The Port’s volume growth is driven by the fact that so many vessels make their first U.S. calls at the Port of New York and New Jersey. One-third of the nation’s GDP is produced within 250 miles of that port.

Following the opening of the ExpressRail facility at GCT Bayonne terminal in New Jersey, the Port’s fourth on-dock rail site gives shippers out of that terminal extended reach into Midwest, Southern and U.S. Northeast markets.  GCT Bayonne’s electronic appointment system has also slashed turn times to the extent that dual transactions can sometimes be completed in an hour compared with twice that or more in the past.

How to Improve OTIF: 15 Tips for On Time and In Full Delivery
END_OF_DOCUMENT_TOKEN_TO_BE_REPLACED 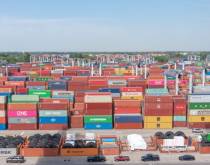 23 Sep 2022
The Georgia Ports Authority is lowering the number of empties carriers can store at its terminals and increasing fees for storing empties that exceed those allotments.
MORE »

Ocean carriers step up NY-NJ empty sweeps under threat of new fee
16 Sep 2022
The Port of New York and New Jersey has seen an uptick in empty container sweeps by ocean carriers after its decision to impose a tariff aimed at empty boxes lingering in the region.

NY-NJ port truckers tepid on Saturday terminal gates
24 Aug 2022
NY-NJ marine terminals have been almost constantly offering Saturday gates over the last two years to help move import volumes, but those gates have accounted for only about 5 percent of total truck transactions.

Wan Hai sees Philadelphia as option to clear NY-NJ empties
19 Aug 2022
Wan Hai says adding port calls to the US East Coast gives the carrier and its customers more options for returning empty containers rather than just sending them to the Port of New York and New Jersey.

NY-NJ terminal alters free time to prod Saturday gate usage
17 Aug 2022
The move by Maher Terminals effectively shortens the time a shipper is given to remove their cargo from the port before fees kick in, while putting pressure on motor carriers and warehouses to operate longer hours.

NY-NJ rail lifts fall as low rates entice shippers to truck
05 Aug 2022
The Port of New York and New Jersey saw a decline in rail volumes in the first half of 2022 as intermittent container embargoes at railroads and low trucking rates pushed shippers off the rails.

Carriers need to sweep up NY-NJ empties: FMC’s Maffei
04 Aug 2022
Ocean carriers serving the Port of New York and New Jersey should do more to sweep up empty containers, according to FMC chairman Daniel Maffei, as the agency announces a broader look into the issue.

NY-NJ port to impose dwell fee targeting empty containers
02 Aug 2022
The Port Authority of New York and New Jersey said it will start charging an export container dwell fee in a bid to prod ocean carriers to remove more containers than they drop off.

Terminal appointments add to NY-NJ empty return hurdles
25 Jul 2022
Port of New York and New Jersey drayage carriers say their ability to operate is being hamstrung by the need to find scarce appointments at marine terminals for returning empties.

Asia–US East Coast spot rates hit 2022 low as shippers slow ordering
18 Jul 2022
Spot rates for ocean freight from Asia to the US East Coast have fallen as order cancellations by US shippers frees up vessel space.

NY-NJ deepening study gets US Army Corps blessing
23 Jun 2022
The commander of the US Army Corps of Engineers has endorsed a study about the merits of deepening and widening the Port of New York and New Jersey to allow larger ships to call and reduce wait times.

Maersk picks NJ for fourth cold-storage warehouse
06 Jun 2022
Maersk’s Performance Team subsidiary said it will open its fourth US cold-storage warehouse near the Port of New York and New Jersey as it seeks to add refrigerated cargo handling to its growing suite of integrated logistics services.

MSC, Hapag-Lloyd to skip some US, Canada port calls in June
23 May 2022
Major carriers are skipping port calls and changing around schedules for services into Canada and the US East Coast amid high congestion and vessel delays.

Growing South Asia imports serve as China hedge for NY-NJ shippers
12 May 2022
The new director of the Port of New York and New Jersey said Shanghai’s COVID-19 lockdown is not causing any slowdown at the port because of an increasing number of containers from South Asia and the Indian subcontinent.

Rooney to lead NY-NJ port following Ruda departure
11 Apr 2022
Veteran port executive Bethann Rooney will become the next director of the Port of New York and New Jersey upon next month’s departure of Sam Ruda.

NY-NJ truckers say off-dock empty box returns adding to costs
06 Apr 2022
Truckers working the Port of New York and New Jersey say they are not always being paid enough for increasingly longer trips away from the port to deliver empty containers.

Carriers sweep empties from US ports ahead of fresh import wave
25 Mar 2022
Ocean carriers are stepping up efforts to sweep up empty containers that are congesting ports on the US West and East coasts ahead of an expected surge of new imports.

Supreme Court delays New Jersey’s exit from NY-NJ port watchdog
24 Mar 2022
The US Supreme Court has temporarily blocked a New Jersey law that would allow the state to exit the bi-state police agency charged with investigating criminal activity among longshore labor at the Port of New York and New Jersey.

MSC launches first direct US calls from Baltic states
16 Mar 2022
Mediterranean Shipping Co. is launching the first container service into the US East Coast that will call three Baltic countries directly, as congestion woes on the trans-Atlantic mount.

OOCL’s rail-sea service rerouted from Russian port
11 Mar 2022
OOCL’s Rail-Sea service to the US East Coast has been shifted away from a Russian transshipment port and instead is using a route through Poland amid the ongoing war in Ukraine.

Yang Ming waives import box fees, but empties the issue: truckers
11 Mar 2022
Yang Ming is extending waivers on fees related to import containers lingering at marine terminals because of congestion, which truckers claim is due to empty boxes.

Pan Am rail deal would boost Northeast port reach: CSX
18 Jan 2022
CSX laid out its case to federal regulators that it should be allowed to acquire New England’s Pan Am Railways in order to give shippers better intermodal service into Northeast ports.