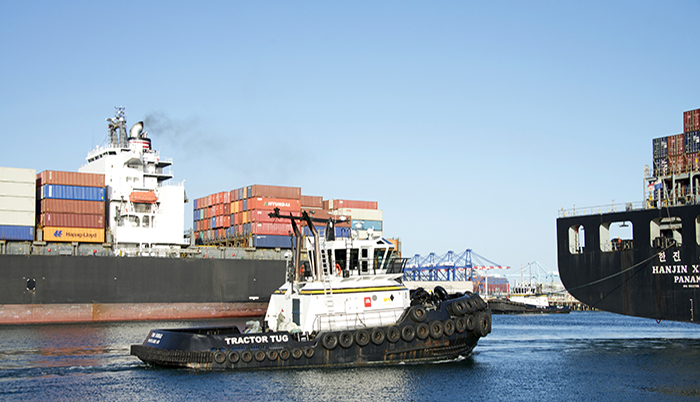 Underscoring the importance of reigning in carbon emissions, highways buckled, wildfires burned, and flights were canceled throughout the US West last week because of extreme heat that disrupted goods movement.

“We can understand their concerns. We don’t want anyone to be unduly burdened, but everyone has to be vested in the process,” said Seroke in urging stakeholders to voice their opinions during the public comment period that is underway into September.

The ports of Los Angeles and Long Beach last week announced the schedule for completing what will be the final draft of an update to their landmark Clean Air Action Plan. The draft CAAP 2017 will be released on July 19. A public workshop will be held on Aug. 30 in Wilmington, California. The period for written public comments will close on Sept. 18. The two harbor commissions will meet in November to consider approval of the plan.

Since the first CAAP was approved in 2006, the port complex has reduced port-generated diesel particulate matter by 85 percent, nitrogen oxides by more than 50 percent, sulfur oxides by 97 percent, and greenhouse gases by 12 percent. The emission reductions came from vessels, tugboats, terminal operating equipment, trucks, and trains.

As a measure of its success, Seroka noted that the ports announced in September 2015 they had met or exceeded all of the goals of the original CAAP nine years early. Success came at a cost. Referring to just the clean-truck portion of the CAAP, Seroka noted that each port contributed $125 million to help truckers purchase compliant trucks, which at the time were listed as having 2007 model engines or newer. The harbor trucking industry said member companies spent more than $1 billion of their own money for compliant trucks.

Success can create problems as well. When emissions reductions exceed 90 percent, incremental gains can be quite costly for every industry sector that must contribute to further reductions. Nevertheless, the mayors of Los Angeles and Long Beach, in a public meeting on June 15, reaffirmed the commitment of the cities to work with their ports on the CAAP update to achieve zero emissions in the next 18 years.

Seroka has heard the comments of BCOs that have privately expressed concern about what their logistics costs will be if carriers, terminal operators, railroads, and truckers must invest in technologies that in some cases may not yet be commercially viable in order to meet the zero-emissions goal. The Pacific Merchant Shipping Association has expressed similar concerns on behalf of its terminal and carrier members.

As city departments in California, the ports must answer to the cities and to state regulators, and their actions are sometimes forced by lawsuits from environmental organizations and community groups. In fact, all major infrastructure development work at the ports came to a halt for almost a decade until Los Angeles came to agreement with environmental groups in a lawsuit involving construction of the China Shipping Container Line terminal. Those measures went further than what are called for in the larger CAAP, and a supplemental environmental impact report for the terminal is now under review that could realign the China Shipping requirements closer to those in the CAAP.

Los Angeles must act with urgency to realign the China Shipping terminal’s environmental guidelines now that China Shipping Container Line has merged with China Ocean Shipping Co. to become one line. Cosco calls at Pier J in Long Beach. Since the China Shipping terminal in Los Angeles, because of its settlement with environmental groups in the last decade, is saddled with pollution-reduction requirements that surpass any other terminal in the 13-terminal port complex, China Cosco Shipping appears determined to ship only as much cargo through the Los Angeles facility as is required by its minimum annual guarantee with the port. Any container volume above the MAG will be directed to the Pier J terminal in Long Beach, China Cosco Shipping determined recently.

The ports must work with the cities, the state of California, and regulators to achieve the latest CAAP update, known as CAAP 3.0, that achieves an acceptable level of emissions reductions while guaranteeing to its customers and vendors that only technologies that are available and commercially viable be implemented. “There has to be a balance,” Seroka said.

That is why the ports, through their technology advancement program, help to finance pilot projects designed to test new technologies with the potential for commercial viability, he said, adding that the ports intend to remain financially committed to the process. “There is a role for the ports to play,” he said.

Seroka is aware of the competitive implications of an aggressive environmental program that applies only to Los Angeles and Long Beach, but it is also important to be a leader in the industry, he said. Through his participation in the International Association of Ports and Harbors and ChainPORT, an organization launched last year in Hamburg to promote the sharing of environmental best practices, Seroka said he has seen first-hand that major seaports around the world share the same concerns about environmental and commercial sustainability. Competition for cargo becomes less of a factor as more ports pull together to promote development and implementation of environmental best practices, he said.