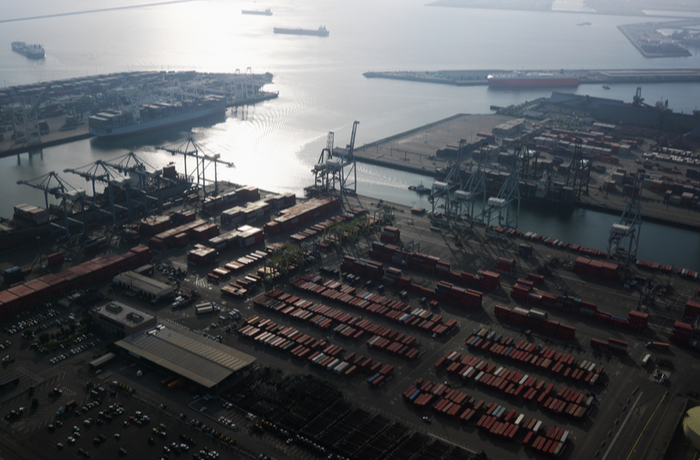 Responding to surprisingly strong consumer demand, e-tailers are drawn to LA-LB because of its shorter transit to the Midwest. Photo credit: Shutterstock.com.

The wave of e-commerce shipments flowing through Southern California are a mixed blessing for the Los Angeles-Long Beach (LA-LB) port complex, boosting imports from Asia to a two-year high but stressing the entire regional supply chain from the ports to distribution warehouses.

In one sense, the import surge underscores how well-positioned the largest US import gateway is to capitalize on growing e-commerce shipments, even if online spending growth regresses to the mean as Americans become more comfortable shopping in physical stores when the COVID-19 pandemic fades.

Responding to surprisingly strong consumer demand, e-tailers are drawn to LA-LB because of its shorter transit to the Midwest. Importers save about two weeks in transit time to the US interior by shipping via intermodal rail through the West Coast compared with the East Coast routing.

And even costlier expedited ocean services are a bargain compared with the air cargo rates out of Asia. Phillip Tran, director of international services North America at APL Logistics, said that all-in door-to-door delivery costs from Asia to the US interior are 75 percent less costly than air freight. As of late August, the average spot air freight rate from Shanghai to North America was up 20 percent from a year ago, according to the TAC Index. However, given the strength of demand, some e-tailers still had to turn to air services, as North America was the only global region to see year-over-year air cargo volume growth in July, according to the International Air Transportation Association.

For many e-tailers, ocean shipping through LA-LB is the only option. The gateway’s network of services to and from Asia makes it easier and faster to build less-than-container loads at Asian origins. That suits the vast majority of e-tailers, which are small and medium-sized and do not have a four- or five-corner distribution strategy that allows their bigger counterparts to ship through other coasts.

Last month, APL Logistics added Haiphong, Vietnam, as the 13th Asian load port to its OceanGuaranteed product. That product features priority loading in Asia and time-definite delivery to destinations throughout North America through the use of team truck drivers from LA. Expedited trans-Pacific services offered by Matson Navigation Co. and Zim Integrated Shipping Services have also been in high demand in recent months, forwarders and carrier executives tell JOC.com.

An analysis of data from PIERS, a sister company of JOC.com within IHS Markit, shows that whether it is for e-commerce or inventory restocking, importers and their forwarders and carrier partners are favoring LA-LB. In July, the ports handled their largest share of Asian imports heading into the US since April 2018, at 53.7 percent.

So much volume, so soon

However, that growth has come at a cost. Since late June, LA-LB marine terminals have struggled with congestion and there is no immediate signs of letting up, considering that carriers and forwarders said volume forecasts from shippers are strong through at least Golden Week, which runs from Oct. 1–8.

It is becoming increasingly more difficult to pre-appoint empty container turns for retailer customers, Kempisty said. Before the most recent surge in imports from Asia, a driver could pick up an import container and then return the empty container, a move that had been scheduled with the marine terminal in advance. Now, it can take two to three days to get an appointment, largely because plenty of slots are booked but not used.

Additionally, if the consignee is not ready to receive the container for unloading, the empty return appointment can be missed. And the driver can be tied up waiting for the unstuffing of the container and lose their ability to make another truck move that day.

Frustration among truckers is mounting. In an Aug. 18 letter, harbor truckers urged LA-LB ports to consider using their tariff authority to incentivize ocean carriers to share more shipment information with shippers and truckers to increase cargo velocity. Too much of the information needed by cargo owners, terminal operators, and truckers to plan for the return of empty containers to the ports is not being shared by container lines’ operation staff, said Weston LaBar, CEO of the Harbor Trucking Association.

“Right now, the problem is on the empty side. The empty returns are where the disconnect is,” LaBar said.

In the meantime, the surge of e-commerce volumes, which is putting pressure on the supply chains of all shippers, not just e-tailers, is sparking questions about just how sustainable the volumes are and just how much shippers are willing to pay for expedited service. For example, given the equipment issues at LA-LB, Port X Logistics is considering acquiring up to 200 chassis and renting a 4-acre lot to store and transload at a 25,000-square-foot facility, said Kempisty.

“Do we buy 200 chassis and spend $1.2 million in yard space rent and bet that people will pay a higher price for better chassis and throughput?” he asked. “Is it worth doing this with all the peaks and valleys” in volumes?