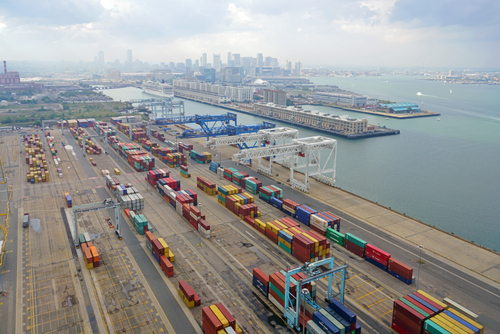 The largest port in Massachusetts, the Port of Boston is located in Boston Harbor, adjacent to the City of Boston. One of the principal ports on the east coast of the United States, the Port of Boston offers facilities dedicated to bulk cargo, petroleum, and LNG shipment and storage, primarily located on the Mystic River, along the city of Everett waterfront as well as the Chelsea River area of East Boston, Chelsea, and Revere. The Chelsea River depots also contain facilities handling jet fuel for Logan International Airport.

Major terminals at the Port of Boston:

-- Conley Terminal: The container facility for the Port of Boston, this terminal itself has been in use since World War II, when it was called the Castle Island Terminal. After Sea Land pioneered the use of shipping containers in the mid-1960s, Castle Island became one of the first container terminals in the country. Nowadays, Conley Terminal is capable of handling Panamax and post-Panamax container ships.

-- Boston Autoport: Now dedicated exclusively to the processing and shipping of automobiles, this site once served as the Moran Container Terminal. The public facilities, which are operated by Massport -- an independent public authority rather than a state agency -- are located in the neighborhoods of Charlestown, East Boston, and South Boston.

Canada Trade and Shipping Outlook
TPM22: What We Learned — Container Shipping in the Crosshairs
Managing E-Commerce From Order to Delivery and Beyond
END_OF_DOCUMENT_TOKEN_TO_BE_REPLACED 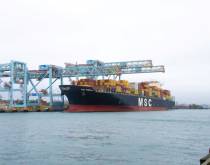 10 Nov 2021
The Port of Boston will be without an Asia direct service through most of January because the vessels in the service have been severely delayed by Savannah congestion.
MORE »

Outlook 2021: NY–NJ port looks to improve flow as smaller East Coast gateways expand
20 Jan 2021
After a likely decline in annual container volumes at the Port of New York and New Jersey in 2020, the largest US East Coast gateway is focusing on improving efficiency, including through better data sharing with truckers.

Boston seeks $300 million upgrade as coastal share slips
13 Feb 2018
The Port of Boston’s stance regarding its expansion is, “If you build it, they will come.” The port, which after its upgrade will be able to handle 14,000 TEU ships, also says it will be able to bring freight closer to customers than other US East Coast ports.

Boston port moves closer to handling neo-Panamax ships
15 Jul 2016
The port of Boston moved a step closer being able to handle some of the the larger ships able to traverse the expanded Panama Canal.
Lisa Wieland named Boston port director
04 Feb 2016
Lisa Wieland has been named executive director of the agency that oversees Boston's airport and seaport.

App aimed at improving truck turns at Boston port
01 Sep 2015
Truckers serving Conley Container Terminal at the port of Boston can use a newly-launched app to find out when containers are ready to be picked up, another sign of how technology is being tapped to improve port productivity