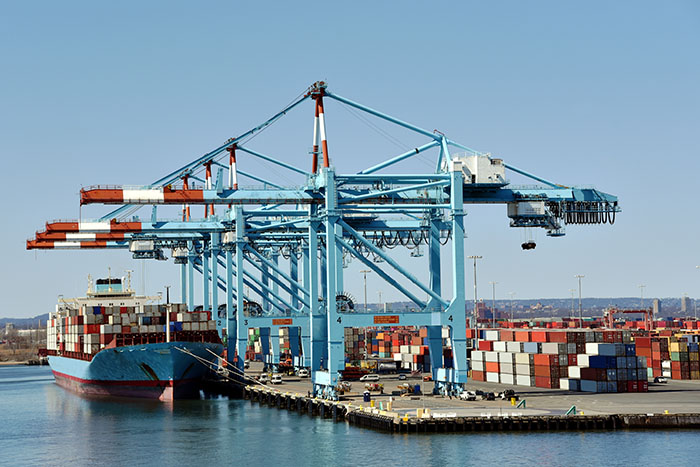 The Port of New York and New Jersey (pictured) is expecting to return to positive growth in 2021 after container volumes fell to the lowest level in three years in 2020. Photo credit: Shutterstock.com.

With no large-scale capacity expansions planned, the Port of New York and New Jersey is looking at how it can move containers more efficiently in 2021 and beyond, while smaller ports on the US East Coast are still hard at work on projects aimed at boosting their volumes.

As with its West Coast peers, the largest East Coast gateway saw a bifurcated 2020 due to the COVID-19 pandemic. The first half was marked by a sharp slowdown in port activity as government lockdowns in China and the United States crimped demand, prompting ocean carriers to quickly cancel a record number of sailings.

As pandemic restrictions across the world eased, volumes not only rebounded, but surged to record levels in the second half of 2020 due to pent up consumer demand and shippers seeking to replenish inventories of consumer goods, which had fallen to multi-year lows.

“What began as a supply shock in China in early 2020 became a global supply shock,” Sam Ruda, ports director for the Port Authority of New York and New Jersey (PANYNJ), said during an online conference hosted by the Maritime Association of the Port of New York and New Jersey (MAPONY/NJ) in October. “This was then accompanied by a demand contraction and then an incredibly sharp cargo rebound.”

The second-half container surge led to sporadic delays and equipment shortages in and around the port. Trucks retrieving containers from marine terminals faced waits of up to 1.5 hours in the latter part of the year, according to Tom Heimgartner, chairman of the Newark-based Association of Bi-State Motor Carriers and president of drayage provider Best Transportation. Returning empties was even more difficult, with turn times ballooning to as long as three hours, Heimgartner added.

Chassis supply has also been limited. Val Noel, COO of equipment provider TRAC Intermodal, told the MAPONY/NJ event that the utilization rate for 40-foot chassis in NY–NJ reached 90 percent and higher in the second half. Railroads also had a tough time bringing in enough cars to retrieve containers from terminals.

But port stakeholders are working on ways to boost efficiency, said John Atkins, president of Global Container Terminals USA, which operates the GCT Bayonne and GCT New York terminals. More specifically, terminal operators are looking at ways to better share data with truckers about container availability, he said, adding that there are also plans to develop an online platform for truckers to ease the process of returning empty containers.

“If we continue this progress, it should bring efficiency to everyone who touches cargo,” Atkins said during the conference.

Despite the second-half rebound, total container volumes at New York and New Jersey terminals for 2020 are expected to total 6.6 million TEU in 2020, the lowest level in three years and 12 percent below PANYNJ’s pre-pandemic estimate.

PANYNJ projects a recovery in 2021, with container volumes reaching an estimated 7.2 million TEU, but that estimate is 8.5 percent lower than the agency’s pre-pandemic 2021 forecast.

Even with fewer containers overall in 2020, terminals in New York and New Jersey are handling more larger ships than ever. In the first nine months of 2020, approximately 40 percent of the vessels calling the port had capacities of 9,000 TEU or higher, up from 37 percent in the same 2019 period.

Beth Rooney, deputy port director for PANYNJ, said the drop in container volumes will limit the port’s capital spending in 2021 to recurring maintenance and completing projects that have already begun.

“Anything not already in progress is being delayed,” Rooney said.

Still, Rooney said, the projects already under way will make it easier to move containers in and out of the port. The authority plans to finish work on the Waverly Loop project, for example, which will allow for more efficient railroad service to and from the port.

Truckers should also benefit from restorations to Corbin Street, the main road into marine terminals in Newark and Elizabeth, NJ, along with better signal management to improve traffic flow, Rooney said.

On the waterside, the port is also looking to complete another berth at Port Newark. It is also looking at ways that terminals and others can boost use of renewable energy, along with ways to reduce trucking emissions.

Other short-term measures likewise have boosted efficiency at the port. TRAC’s Noel said in November the company had moved an extra 900 chassis into NY–NJ to ease supply constraints, and marine terminal operators were planning to open on Saturdays up through Christmas to ease the short-term backlog of containers.

“The port authority deserves a lot of credit for pushing for Saturday gate hours,” Heimgartner said.

Elsewhere in the Northeast, the Port of Boston plans to complete projects in its harbor and on the land side in the coming year that will allow it to service ships with up to 14,000 TEU of capacity, up from its current limit of 10,000 TEU.

The US Army Corps of Engineers recently completed a year-and-half-long project that dredged outer Boston Harbor to a 51-foot depth and its main ship channel to a 47-foot depth, along with widening its turning basin. Contracts for a third round of dredging are expected to be awarded in January.

Along with the harbor deepening, the Massachusetts Port Authority (Massport) is adding two new berths to the Conley Container Terminal, as well as three new ship-to-shore cranes. Improvements to the Conley Terminal, which also include the addition of new refrigerated container storage space and truck gates, are expected to be completed in mid-2021.

Mike Meyran, port director for Massport, said the upgrades will make Boston more competitive with other East Coast gateways. “Shipping companies are choosing Boston because we have made such significant efforts to improve the port,” Meyran said.

Farther south, the Port of Baltimore is readying major upgrades thanks to a $166 million investment from Ports America, which operates the port’s Seagirt Marine Terminal.

The upgrades come as the US Army Corps of Engineers is scheduled to start dredging Baltimore harbor to a 50-foot depth and the port moves forward with a project to heighten the rail tunnel that serves the port so containers can be double-stacked on trains. The port authority considers the latter to be a crucial factor in enticing cargo owners moving intermodal volumes to and from the Midwest.