Established in 2015, The Northwest Seaport Alliance (NWSA) is a marine cargo operating partnership between the Ports of Seattle and Tacoma. The Alliance manages the majority of marine cargo facilities across both ports, including all containerized cargo operations, breakbulk, automobiles, project/heavy-lift cargoes and some bulk operations. The North Harbor, or the Port of Seattle, has five container terminals. A variety of properties provide supporting activities to its containerized cargo terminals. The BNSF Seattle International Gateway Yard and the Union Pacific Cargo Yard provide essential rail services for its containerized cargo activities. Terminal 106, south of Harbor Island and on the east side of the Duwamish River, is used as a container support yard. Terminal 107, on the west side of the Duwamish River, and Terminal 108, on the east side of the Duwamish River, offer moorage for barges. The South Harbor, or the Port of Tacoma, has six container terminals, as well as Blair Terminal, where automobiles are offloaded. East Blair 1 provides services for roll-on/roll-off (RoRo) vessels and the West Hylebos Log Yard provides services for log exports. Terminal 7, on the south end of East Sitcum Terminal, also provides automobile and RoRo services. While full containers represent more than 75% of all TEUs handled by the NWSA, empty containers are also an important part of its containerized cargo activities. Both full and empty containers are loaded and off-loaded from vessels, requiring the expertise of a wide range of industries and occupations, including terminal operators, longshore workers, truckers and more. Leading import commodities included machinery, furniture, rubber plastics, base metals and transport equipment. Leading export commodities included oil seeds, prepared foodstuffs, wood pulp and wood products. In 2017, the vessel value of containerized cargo handled by the NWSA was nearly $75.3 billion. Imports represented 77% of total vessel value, or $58.3 billion, while exports totaled nearly $17.0 billion. Among the leading commodities in 2017 were machinery, transportation equipment, base metals, toys and apparel. The countries with the most containerized cargo moving through the NWSA included China, Japan, South Korea, Taiwan, Vietnam and Hong Kong, which together represented more than 80% of all TEUs traveling through the NWSA.

Canada Trade and Shipping Outlook
TPM22: What We Learned — Container Shipping in the Crosshairs
Managing E-Commerce From Order to Delivery and Beyond
END_OF_DOCUMENT_TOKEN_TO_BE_REPLACED 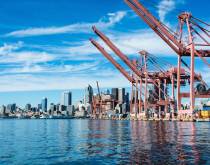 21 Mar 2022
The US Department of Agriculture and the port of Seattle have announced plans for a “pop-up” yard that will help with the pre-positioning of export containers for ag shippers.
MORE »

Outlook 2022: West Coast ports face continued congestion, vessel backlogs
14 Jan 2022
Plagued by vessel bunching, terminal congestion, and equipment shortages for much of last year, North America’s West Coast ports are cautioned that these conditions are likely to persist well into 2022 even if imports slow from the double-digit gains in 2021.

Outlook 2022: No trans-Pacific supply chain relief anticipated in first half 2022
30 Dec 2021
With import volumes in the trans-Pacific projected to remain strong into the new year and water and landside congestion continuing, the first half of 2022 will look eerily similar to 2021.

Outlook 2021: Oakland, NWSA ports to face increasing competition for Asian imports
29 Jan 2021
The British Columbia ports of Vancouver and Prince Rupert, as well as US East and Gulf Coast ports, will be looking to further increase their share of US imports from Asia in 2021.

US ports push multimodal national freight plan
13 Feb 2020
The long-promised National Freight Strategic Plan should be about more than highways, groups representing US ports and shippers said this week. The question still is how to pay for freight priorities.

Terminal 5 lease approval triggers Sea-Tac expansion
03 Apr 2019
SSA Terminals will take control of the currently vacant Terminal 5, a move that will allow the Northwest Seaport Alliance to consolidate international container traffic at two terminals each in the ports of Seattle and Tacoma.

ILWU local returns to work at Seattle terminal for night shift
22 Aug 2018
Western Washington members of the International Union of Operating Engineers Local 302, are engaged in a contract dispute with a construction industry employer performing general construction work throughout the region.