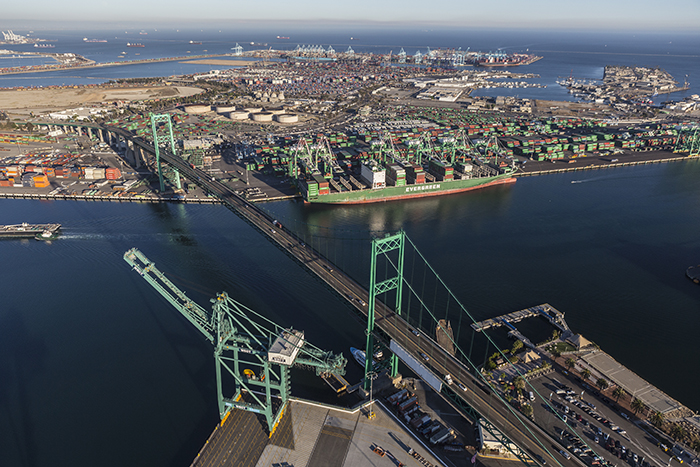 The combined import-export market share of the ports of Los Angeles and Long Beach (pictured) has fallen from 26.5 percent in 2015 to 22.9 percent in 2019. Photo credit: trekandshoot/Shutterstock.com.

Correction: A previous version of the Top 25 North American Ports ranking tables below had the TEU volume for 2019 mistakenly labelled as 2018. JOC apologizes for the error.

The long-term diversion of cargo volumes away from ports on the West Coast of North America accelerated in 2019, as the United States-China trade war forced importers and exporters to consider alternative markets. That’s reflected in JOC.com’s Top 25 North American Ports rankings, as the likes of Houston and Savannah increased their market share on the back of strong growth, while Los Angeles, Long Beach, and ports in the Pacific Northwest saw their market share erode.

The ports of Los Angeles and Long Beach shed an aggregate 1.5 percent market share of North American containerized throughput in 2019, according to data from PIERS, a sister product of JOC.com within IHS Markit. The combined two-way market share of the Southern California gateways stood at 22.9 percent for the year, down from 24.4 percent in 2018 and 26.5 percent in 2015. That’s a 13.6 percent erosion in share for the continent’s biggest container gateway in the last four years alone.

With Chinese-made goods subject to new and increased Trump administration tariffs of as much as 25 percent, US importers increased sourcing in locations such as Southeast Asia, where ports on the Atlantic and Gulf coast could more effectively compete for those volumes. At the same time, US exporters, faced with increased reciprocal duties in China, sought to increase sales in other countries.

According to PIERS, US container import volume from Vietnam surged 34.2 percent year over year in 2019, while imports from Thailand jumped 18.5 percent and shipments from India were up 9.5 percent. All three markets are in play for US East Coast and Gulf Coast ports. By contrast, imports from China dropped 9.8 percent during the same period.

As a result, the ports of Los Angeles and Long Beach, North America’s first and third largest individually, shed 581,000 TEU in import volume in 2019. West Coast ports lost nearly 2 percentage points of throughput share to other North American gateways during the year, with Prince Rupert and Oakland the only gateways on the West Coast that managed to grow their respective market shares.

The volume drain from West Coast ports even extended to Manzanillo and Lázaro Cárdenas in Mexico and Vancouver in Canada. Those three ports, along with the Northwest Seaports Alliance of Seattle and Tacoma, collectively lost 0.5 percent in market share for the West Coast. Prince Rupert offset some of that lost volume, growing its market share by 0.4 percentage points, from 1.8 percent to 2.2 percent. That growth was equal to about 20 percent of the volume lost across West Coast ports to East and Gulf coast competitors.

With imports from China likely to decline further in the wake of the COVID-19 pandemic, the competitive landscape for North American ports will be even more strained in 2020.

On the export side, Savannah reinforced its position as the third-busiest North American port, growing share from 7.9 percent to 8.1 percent in 2019, while Long Beach’s share fell from 7.4 percent to 7.3 percent. Houston appeared ready to overtake Long Beach, with 2019 outbound volume surging 18.9 percent, to 1.2 million TEU, on the back of strong growth in resin product manufacturing, but that ascent could be hampered by IHS Markit’s projection that US resin exports will fall about 9 percent in 2020 due to the recent collapse in oil prices triggered by a coronavirus-related drop in demand.

The share of total import volume of the top 25 North American ports fell from 94.1 percent in 2018 to 93 percent in 2019, while the outbound market share of the busiest export gateways held steady at 95.6 percent.