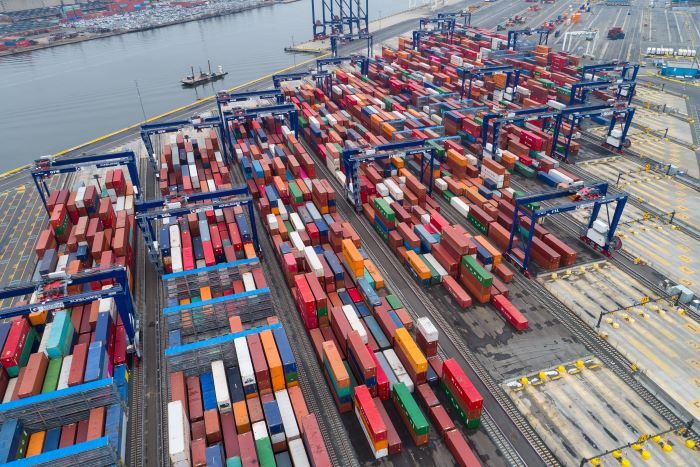 The FMC noted the Port Authority of New York and New Jersey and local stakeholders see the issue of facilitating double moves by drayage carriers as a top priority. Photo Credit: Shutterstock.com

Clarification: This story has been updated to remove reporting regarding the connection between chassis and so-called double moves by truckers. The original version of a Federal Maritime Commission news release erroneously identified chassis as being a factor in making double moves harder. The FMC has since updated the news release.

The long-held view among many truckers that they need more so-called double moves received some official validation from the Federal Maritime Commission’s (FMC) latest report on the container supply chain at the Port of New York and New Jersey.

In its latest report on the current status of US ports, the FMC found NY-NJ is in “good shape” overall, but did cite the ongoing difficulty of drayage carriers in being able to return an empty container before picking up a full container at a marine terminal.

The FMC noted the Port Authority and local stakeholders see the issue of facilitating double moves as “a high priority and (are) working to improve the process.” In the report released Tuesday, the FMC also urged  ocean carriers to get more involved in local stakeholder groups.

Newark-based Association of Bi-State Motor Carriers, which represents drayage carriers and participated in an FMC review of COVID-19 impacts on liner shipping supply chains in US  trades, does not track double moves in the NY-NJ port. But anecdotally, many of its members say they are more frequently returning containers to facilities other than their origin.

The increasing number of gate moves during a time when container volumes fell “would suggest multiple gate moves for each container,” said Tom Heimgartner, chairman of the Association of Bi-State Motor Carriers and president of Best Transportation.

“What we’d like to do is return the empty box from where we got them,” Heimgartner said. “But much of the time we are doing multiple moves.”

Global Shipping Outlook: A Sneak Peek at 2021
Port Performance North America: Managing Cargo Flow During a Pandemic — and Beyond
END_OF_DOCUMENT_TOKEN_TO_BE_REPLACED