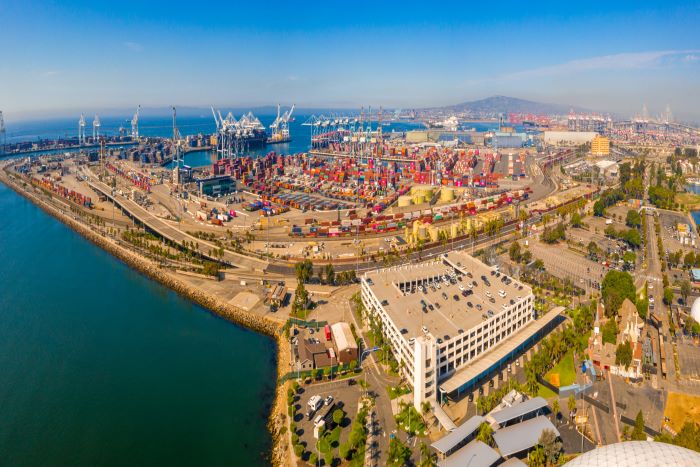 Drayage operators are struggling each day to secure sufficient chassis to move containers to and from the 12 container terminals in Los Angeles–Long Beach. Photo credit: Shutterstock.com.

Truckers and marine terminals said a shortage of chassis has reemerged in Los Angeles–Long Beach (LA-LB) owing to a recent cargo surge, though a top Intermodal Equipment Provider (IEP) to the port complex said there are enough available chassis, just not necessarily in the right locations.

All parties point to excessive dwell times at warehouses in the region as the primary cause of the equipment dislocations, and an issue the entire supply chain must address.

The shortages, caused by a spike in imports coupled with extended equipment dwell times at warehouses in the region, should work themselves out in the next month if the import surge wanes, truckers and marine terminals told JOC.com. They noted that equipment imbalances always seem to surface when cargo volumes spike owing to seasonal factors, or when retailers rush shipments to get ahead of import tariffs, as they did last year.

Drayage operators said they are struggling each day to secure sufficient chassis to move containers to and from the 12 container terminals in the ports of LA-LB. “In general, for our members, there is no equipment,” Weston LaBar, CEO of the Harbor Trucking Association, told JOC.com Wednesday.

Alan McCorkle, president and CEO of Yusen Terminals in LA, said marine terminals do not have enough chassis available for the delivery of import containers to truckers. “We’ve had a chassis shortage for the past three or four weeks, with last week being the worst,” he said.

McCorkle noted that whenever the demand for chassis varies from what would be considered the average needs of the transportation community throughout the year, chassis shortages occur. This year the IEPs “right-sized” their fleets for the reduced demand owing to the coronavirus disease 2019 (COVID-19), but were slow to react to the current surge in imports, he said.

According to DCLI, the issue is a chassis dislocation problem rather than an actual shortage of equipment in the region. Ron Joseph, DCLI’s executive vice-president and chief operating officer, said Wednesday there were about 27,000 chassis available across the complex’s 12 terminals. To ensure efficient cargo flow, there should be more than 30,000 chassis at the terminals, Joseph said, but he added that 27,000 can not be called a “crisis”.

Joseph said chassis dwell times at warehouses and manufacturing plants have ticked up in recent weeks, which keeps the equipment out of circulation. According to the Pool of Pools website, the so-called street dwell time the past four weeks has averaged more than five days, with four days or less considered to be necessary to meet equipment needs in Southern California. The three large IEPs — DCLI, TRAC Intermodal, and Flexi-Van Leasing — operate the Pool of Pools in Southern California.

Pool of Pools responding to need for interoperable chassis

In order to address these issues, the IEPs have been injecting chassis into the region, Joseph said. The Pool of Pools inventory is about 62,000, which should be sufficient if street dwell times were lower, he said.

He added that in June, about 105,000 chassis were returned to terminals other than those through which the loaded inbound containers entered the port complex. LaBar added that this phenomenon, which is a product of three major carrier alliances splitting vessel calls among 12 terminals, results in an efficient use of chassis.

LaBar said the chassis dislocation problem is magnified when terminals place restrictions on the return of empty containers, or when truckers are unable to secure appointments needed to book dual transactions, both of which are occurring today.

“All of these restrictions we face essentially lock our members out of the terminals,” LaBar said. These restrictions are also contributing to the lengthy chassis dwell times on the street, he added.

Yet another issue contributing to the chassis problem is the number of idled chassis needing repair. LaBar said about 13 percent of the chassis in the Pool of Pools are “bad-order” equipment.

Joseph said the IEPs are repairing bad-order chassis “as quickly as possible,” and they are also bringing chassis into the region from elsewhere.

However, LaBar said even those truckers that want to buy or lease chassis from the IEPs are unable to do so. “There are no available chassis,” he said.

LA-LB experienced similar issues in late 2018 and early 2019 at the beginning of the US–China trade war when retailers fast-forwarded shipments to get ahead of import tariffs. Truckers and terminal operators complained to the IEPs, but by the time the IEPs reacted, container volumes had returned to normal, he said.

“This is the typical thing. We get three to seven weeks of shortages and then the noise goes away and the problem corrects itself,” McCorkle said.