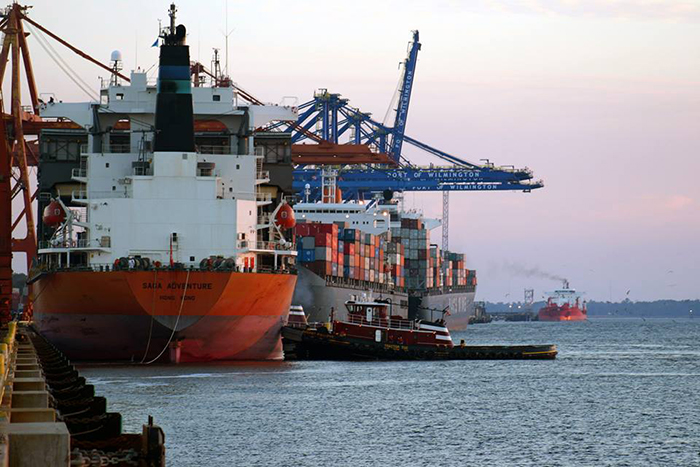 Smaller ports such as Wilmington, NC, could benefit from the new services of the restructured container line alliances.

The restructuring of vessel-sharing alliances and deployment of mega-ships in the trans-Pacific trades allows US ports large and small to gain services, benefitting importers that use the top five load centers, but also use smaller gateways to feed their distribution centers.

The import trade from Asia is the largest US trade lane, and the only lane in which ports on the West, Gulf, and East coasts are not severely limited by geographical location in competing for cargo. By contrast, for example, West Coast ports have little chance of competing for market share in the trans-Atlantic trade.

The US import trade from Asia is much larger than other trades and it has opened up opportunities for non-load-center ports such as Baltimore, Boston, Jacksonville, Miami, Wilmington, North Carolina, Mobile, and New Orleans to carve out shares ranging from 1.4 percent to 18 percent of Asian imports on their respective coasts, according to an analysis by PIERS, a sister division of JOC.com.

The implication of this trend for retailers and other importers who ship to various parts of the United States is that the restructuring of vessel-sharing alliances from four smaller groupings to three larger alliances beginning on April 1 gives the alliance members opportunities to offer a weekly service or two to the non-load-center ports to serve niche markets. Under the five-corners supply-chain strategy that many national retailers follow, the major load centers are the US-Canadian Pacific Northwest, Los Angeles-Long Beach, Houston, Savannah-Charleston, and New York-New Jersey-Norfolk.

Mega-ships with capacities of 8,000 to 14,000 twenty-foot-equivalent units will soon dominate the US trades now that the Panama Canal expansion project has been completed and the big ships can be deployed to all three coasts. Of course, the mega-ships will discharge most of their cargo at the five-corners ports, and these are usually referred to as the “winners” in this era of big ships. However, there seems to be room in the trans-Pacific for multiple ports. For example, the Gulf Coast is increasing its share, albeit from a small base, of US imports from Asia. Carriers now offer four services each to Houston and Mobile and one to New Orleans.

This development prompted Asaf Ashar, research professor (emeritus) and independent consultant at the National Ports and Waterways Institute, to say that the West Coast’s loss of market share in Asian imports in recent years may be driven as much by diversion of some cargo to Gulf ports as to East Coast ports. The Gulf Coast ports quadrupled their market share of Asian ports since 2005 to 2.85 percent, according to the PIERS numbers.

Yet West Coast ports face an even greater threat to the supremacy in the Asian import trade that they have enjoyed the past 20 years than either the East or Gulf ports. Canada’s Pacific Coast ports of Vancouver and Prince Rupert have been attracting Asian imports that would have otherwise moved through the West Coast. Ten years ago, Prince Rupert did not even have a container terminal, and Vancouver relied on the US market for about 2 percent of its cargo. Today, the US market generates about two-thirds of Prince Rupert’s container volume and US cargo accounts for about 24 percent of Vancouver’s container volume. The Canadian ports together handle about 4.4 percent of US imports from Asia, according to University of California at Berkeley professor of industrial engineering Rob Leachman. 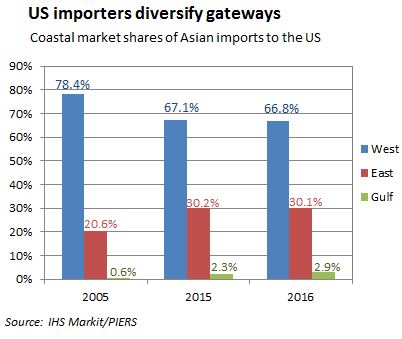 The West Coast ports in the late 1990s and early 2000s may have had an artificially high share of containerized imports from Asia, said Dan Smith, a partner at the Tioga Group. With the dawn of double-stack services from the West Coast, the shipping lines negotiated favorable intermodal rates with the railroads, much to the benefit of West Coast ports, Smith said. However, as volumes grew and the rail capacity became fully utilized, the railroads increased their intermodal rates when the legacy contracts came up for renewal. This development, as well as the labor issues and employer lockout during the 2002 West Coast longshore contract negotiations, offered an incentive for national retailers and other large importers to diversify their import distribution network, and the four or five-corner strategies came into being. This led to a steady deterioration of West Coast dominance.

On the other hand, Smith said, none of the big-box retailers pulled up stakes and left Southern California. Rather, as they grew, they opened import distribution hubs in other corners of the United States and diversified their supply chains. Since most carriers in their Pacific Southwest services discharge 80 percent or more of their vessel loads in Los Angeles-Long Beach before stopping in Oakland on the return voyage to Asia, Southern California remains the largest port complex and transloading capital of the United States.

All-water services from Asia to the East Coast have developed along a different route.

Since distances between large population centers are shorter, and at least a dozen ports were established over the centuries to serve their immediate hinterlands, East Coast ports have been more regional in nature. Due to containerization and the growth in vessel sizes, carriers established the major load centers of New York-New Jersey, Norfolk, Savannah, and Charleston as their hubs for Asian imports. Those ports dominate the East Coast market today, but not to the degree that the two major West Coast load centers in California and the Pacific Northwest control their market for Asian imports.

At the same time, the non-load center ports have been inching up in coastal market share. In 2016, according to the PIERS number, Baltimore’s share of East Coast imports of Asia was 4.62 percent and the coastal share of Boston was 1.68 percent, Jacksonville 3.66 percent, Miami 4.25 percent, and Wilmington and North Carolina 1.4 percent. These non-load center ports in aggregate control more than 15 percent of the East Coast’s imports from Asia.

However, since the Gulf ports in aggregate account for only 2.85 percent of US imports from Asia, even incremental growth can produce a noticeable increase in regional market share. Therefore, the Gulf Coast’s market share in 2016 was four times its 2005 market share as carriers added stops at those ports on some of their all-water services through the Panama Canal.

The Gulf and the East Coast ports viewed the completion last June of the Panama Canal expansion project as further amplifying their role in the eastbound Pacific trade, but the jury is probably still out on that issue.

It is true that the expanded canal will allow larger vessels to call at East and Gulf Coast ports on all-water services from Asia, and carriers since June have responded by doubling the size of their ships on that route to more than 8,000 TEUs. However, the carriers, through their vessel-sharing alliances, have merged a number of strings, so there has been only an incremental increase in net capacity on the all-water services.

Smith does not see the canal precipitating a major shift of cargo away from the West Coast. Rather, the larger ships and the changing vessel-sharing alliances will give big-box retailers and large direct importers more options for redesigning their supply chains to achieve optimal efficiencies.

Furthermore, carriers will probably not rush to increase the size of the vessels they deploy to the 14,000-TEU limit of the Panama Canal because East Coast markets are not yet large enough to fill up those ships with cargo, he said. If carriers ramp up the vessel sizes too quickly, they will end up in a rate war that they are in no position to handle right now, Smith said.

Jim Newsome, president and CEO of the South Carolina Ports Authority, disagrees. He expects that later this year Charleston will have at least one weekly service, and possibly two, with vessels of 13,000 to 14,000 TEUs. He anticipates substantial growth for the South Atlantic ports of Savannah and Charleston in the coming years.

“The Southeast is the place to be,” Newsome said. It is the fastest-growing region of the country in terms of population, and the Southeast is developing a healthy balance of export as well as import cargoes. Population drives imports, and manufacturing, as well as agriculture, drives exports, he said, and the Southeast has all of those ingredients. Newsome expects the South Atlantic ports to grow at twice the national average for US ports. At the same time, most of the growth will be driven by growth in the region. He does not see the South Atlantic ports becoming major contenders for intermodal markets in the Midwest, where West Coast ports maintain an advantage.

Other developments that will affect coastal and regional competition for market share in the near to mid-term are changing carrier alliances and expansion of Canada’s Pacific coast ports. All North American ports this April are bracing for the realignment of the carrier alliances as the increase in vessel sizes to the East and West coasts that will accompany that restructuring will force ports to take care of business in their own backyards, including promoting cargo-handling efficiency and expanding infrastructure, Smith said. “It will be about learning to handle the trade you have more efficiently,” he said.

Also, Prince Rupert later this year will double its capacity with the addition of a second berth. Depending upon how quickly the port attracts additional services, Prince Rupert in the coming year could chip away further at the West Coast’s share of Asian imports.

Each importer has established its transportation supply chain and located its import distribution facilities based upon the origins of its cargo in Asia, its destination markets in the US, the value of the merchandise it imports, and its desired transit times. Those factors normally don’t change much, so the logistics executive does not expect a significant change in port and coastal market shares in the near future.

Parcel vs. LTL: Managing Big and Bulky Shipments Without Breaking the Bank
Global Shipping Outlook: What Will 2022 Hold?
Port Performance North America: When Will the Bottlenecks Ease?
END_OF_DOCUMENT_TOKEN_TO_BE_REPLACED