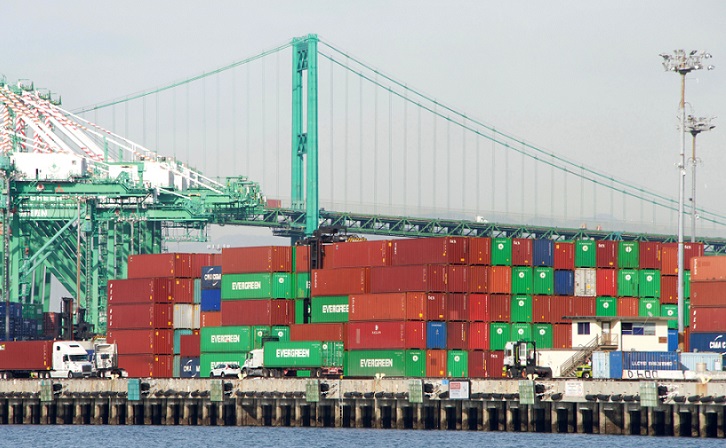 “The technologies are here. They’re being used, so get on it now,” Mike Saxton, chief commercial officer at Orange EV, told the Intermodal Association of North America Expo Monday in Long Beach. (Above: Containers stacked at the Port of Los Angeles.) Photo credit: Shutterstock.com.

The use of smart equipment, including autonomous vehicles, electric yard tractors, and other cargo handling units, is spreading rapidly in the confined environments of ports and rail ramps, as operators seek to lower costs and  increase efficiency.

“The technologies are here. They’re being used, so get on it now,” Mike Saxton, chief commercial officer at Orange EV, told the Intermodal Association of North America Expo Monday in Long Beach.

Although autonomous, or self-driving vehicles, may someday be ready for the open road, regulations and public concerns about safety are a major hindrance at this time and do not pose a threat to drivers who fear losing their jobs. “I still see heavy-duty diesel trucks for the next 50 years,” said Wade Long, regional vice president of Volvo Trucks. Since there are several levels of autonomous trucks, the vehicles used initially will most likely have drivers, although many of the functions will be automated, making it easier and safer for drivers.

Marine terminals, rail ramps, and distribution facilities provide ideal opportunities for the use of autonomous vehicles, which in this context includes tractors or utility tractor rigs that shuttle containers to stacks in the yard, as well as rail-mounted automated stacking cranes and other lift equipment. Jussi Suhonen, sales director, port solutions, at Konecranes, said virtually all horizontal equipment the Finnish company sells runs on electric power.

Automated stacking cranes that lift containers into and out of stacks are an important feature in automated and semi-automated marine terminals. They improve overall terminal productivity and reduce congestion because the stacks are usually positioned perpendicular to the vessel and gate, thus separating street truck traffic from tractors serving the vessels. This significantly improves trucker turn times. Stacking cranes also allow for denser operations, which means the terminal operator can increase throughput on the same footprint.

Electric-powered vehicles and cargo-handling equipment are less costly to operate than their diesel counterparts and last longer because there are fewer moving parts to break down. “Why invest in diesel now when you can go to electric yard trucks, which are ready today?” Saxton said.

There are a variety of autonomous and electric vehicles and cargo-handling units available for marine terminal, rail yard, and warehouse operators. The equipment can be tailored to duty cycles, different operating environments, and load sizes, said Steve Boyd, co-founder and vice president of external affairs at Peloton Technologies. Even when the technology for certain units is not yet available, developers are well along in improving the equipment. For example, Suhonen said Konecranes is continuing to improve the electric technology for straddle carriers, which require larger batteries because of the need to lift heavy containers.

Marine terminals, rail ramps, and warehouses are ideal for autonomous vehicles because they are confined, controlled environments without vehicular traffic. Moving this technology to harbor drayage and the open road will most likely not happen for some years, even though the technology is available. “The technology is way ahead of the regulations,” Long said.

When self-driving vehicles are used on longer-haul trips on interstate highways, the initial use could be in platoons, with two or more trucks, each with a driver, in a platoon, Boyd said. An immediate reduction in fuel consumption will be realized. Furthermore, the operation will allow drivers to engage in productivity-enhancing work or allowing one driver to rest while the other takes the lead, thereby helping to relieve fatigue and assisting helping drivers in meeting federal hours-of-service requirements. “We see these solutions coming along to improve productivity, not abolish jobs,” Boyd said.

Similarly at marine terminals, longshore unions have begrudgingly accepted automation and semi-automation, but there is an overriding anxiety about replacing jobs. While it is true that automation eliminates some jobs, it also creates jobs for workers with tech skills needed to maintain and repair equipment and integrate it into terminal operations. “Don’t forget the technology support work for vehicles and yard operations,” Boyd said. “It’s an opportunity to get new people into this business,” he said.

Impediments to the use of autonomous and electric-powered vehicles and equipment include the need to integrate these with the terminal and rail operating systems, public acceptance of autonomous vehicles, and expansion of the power infrastructure, including the main grids and charging stations, in the port and intermodal environment, although none of these issues are viewed as long-term roadblocks to the expanded use of technology.

While financial support from governments and port authorities is not necessarily needed, public entities can expedite adoption of technology through grants and other incentives, such as is being done now at the ports of Los Angeles, Long Beach, and Oakland, which have formal programs, backed by funding. Boyd said collaboration among ports, government agencies, and the investment community will move the process along faster.