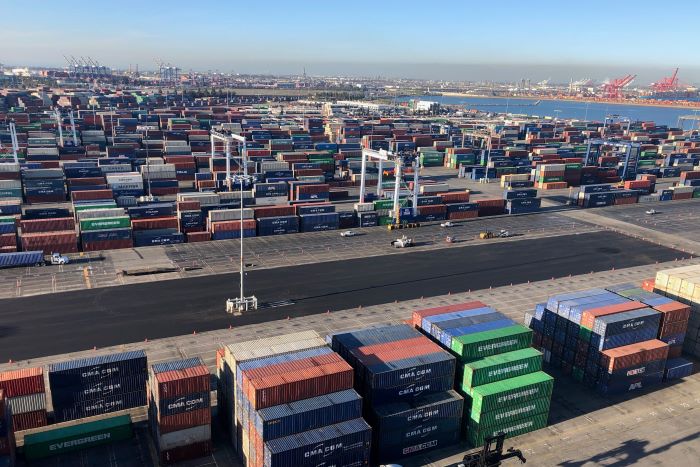 In a test of its new auto in-gate program in recent months, the capacity of each gate lane at Pier 300 was doubled and trucker queue times improved by 84 percent. Photo credit: Fenix Marine

Fenix Marine Services has launched a new “auto in-gate” program at its Pier 300 facility in Los Angeles that the terminal operator says could dramatically improve operational efficiency and truck turn times at the manually-operated terminal.

In a test of the program the past two months, the capacity of each gate lane was doubled, and trucker queue times improved by 84 percent. Fenix CEO Sean Pierce said he expects those metrics “absolutely” can be maintained as auto-gate moves into full implementation, especially when a new artificial intelligence (AI) is added this summer, possibly as early as next month.

“Queue times are already down, even with limited trucker participation,” Pierce told JOC.com Wednesday. As the test period moves into full implementation, Fenix will expand the number of drayage operators who participate in the program and encourage them to file data on their trucks and drivers. The pre-filed information will expedite truck processing at the gates, and the AI component will enhance the terminal’s rubber-tire gantry (RTG) operations in the container yard.

In concert with other improvements made at Pier 300 following Fenix Marine’s purchase of the facility in December 2017, the auto in-gate program is already producing results. Last month, the average truck visit at Pier 300 took 79 minutes, down from 91 minutes in March, according to data recorded by the Harbor Trucking Association (HTA). The average for all 12 terminals in the ports of Los Angeles and Long Beach in April was 63 minutes.

HTA CEO Weston LaBar said he expects more drayage operators who call regularly at Pier 300 will register their company and driver information with Fenix. “We’re excited about this. This is what we’ve been asking for,” he said.

Pierce said auto in-gate is not an automation program but rather a digitization of gate processes in which the data exchanged between truckers and the terminal enables Fenix Marine to better process trucks at the gates and within the container yard. The technology could provide a model for other manual terminals that seek to improve productivity while avoiding the high costs and labor antagonism associated with automation.

In yet a further development, Fenix this summer is scheduled to add an AI component to the auto in-gate program. AI will further shorten truck turn times by enabling Fenix to electronically advise truck dispatchers as to the best times to schedule appointments for drivers, said Scott Schoenfeld, general manager of Fenix Marine.

“This is all about what’s best for the trucker,” Schoenfeld said.

The AI component is designed to expedite the handling of inbound containers by longshore workers who operate RTGs. For manually operated terminals, the RTG blocks pose a risk of bottlenecks during peak volume periods, Pierce noted.

Since taking over operation of the 292-acre Pier 300 terminal formerly operated by APL, Fenix Marine has invested more than $100 million “in people, equipment, technology and infrastructure” to improve service to the Southern California transportation community, the company said in a press release last month.

In the first phase of its investment program, Fenix replaced the former TOS and expanded the capabilities of its optical character recognition (OCR) portals so the terminal and truckers can exchange more data, more accurately, and earlier in the transaction process. Fenix also invested in a number of infrastructure improvements to the terminal.

The improved OCR portal component is already reducing truck queues. Because the data on container numbers, trucking companies, and drivers’ IDs, etc., that is shared by drayage operators is more robust, drivers are moving into and out of the terminal faster than before, Schoenfeld said.

Gate efficiency at the Pier 300 facility, as measured by average truck turn times, has been inconsistent, varying with cargo volumes. When volumes were light, the terminal had decent turn times, but during peak volume periods, turn times increased to unacceptable levels, Schoenfeld said.

According to HTA data, the average monthly turn time at Fenix Marine was 110 minutes last August, during the 2019 peak shipping season, well above the 77-minute average across all 12 terminals in the Los Angeles-Long Beach port complex. In February 2020, when volumes were lighter in the post-Lunar New Year period and factory closures in China were extended due to the coronavirus disease 2019 (COVID-19), the average turn time at Fenix dropped to 84 minutes, compared with 66 minutes for the complex as a whole. When volumes picked up in March, Fenix’s turn times shot up to 91 minutes, compared with 71 minutes for the harbor.

Schoenfeld said that since last year, Fenix jumped from the “back of the pack to the middle of the pack.” Continued improvement is expected under the auto in-gate program, even during peak volume periods. “Now we can handle big volumes consistently,” he said.

Installation of the AI component this summer will be the culmination of a cooperative effort between the drayage community in Southern California and Fenix Marine to achieve two key objectives of truckers, LaBar said.

The key to reducing the length of truck visits is to make it easier for truckers to secure appointments. The most desirable appointment windows fill up quickly in a port complex that generates more than 30,000 truck trips a day. Fenix says more than 35 percent of the appointment slots in the harbor go unused.

Automated terminals such as Long Beach Container Terminal and TraPac feature sophisticated TOSs that help the terminals prepare for truck arrivals days in advance. The automated terminals consistently rank among the most efficient in the port complex by turn times.

LaBar said if a manual terminal such as Pier 300 can use AI to achieve the same operating efficiency as the automated terminals, Fenix Marine will have an operation that other manual terminals could emulate. This will benefit truckers, beneficial cargo owners, and longshore workers, as well as the terminals themselves, LaBar said.

“This could be an opportunity to prove what has been a concept, that a manual terminal can compete with an automated terminal,” he said.

Longshore workers generally resist automation because it can reduce jobs by 40 to 70 percent. By making manual terminals operationally competitive with automated terminals, this model could help preserve dockworker jobs throughout the harbor, Pierce said.