Although Santos is the largest container port in Latin America, it ranks only 42nd on the JOC list of Top 50 Container ports (using 2017 data). More than 40 percent of Brazil’s containers are handled by the Port of Santos, as well as about one-third its of trade, including its vast hinterland that includes the state of Paraná, and 60 percent of Brazil’s GDP. For those reasons, efficient Santos is crucial to the success of companies affiliated to Fiesp and also the Confederation of National Industries of Brazil.

Shippers and ocean carriers using Santos have been complaining about congestion and labor disputes at the port, and about the politicization and the time-consuming bureaucracy of the Port Authority for Santos, known as CODESP (Companhia Docas do Estado do São Paulo). Many argue “regionalization” might help solve problems, including a lack of dredging to issues such as improved/expanded infrastructure.

Various business groups including the Federation of Industries for the state of São Paulo (Fiesp), the most powerful shipper group in Brazil, back the effort to privatize port management, aiming to cut inefficiencies and alleged corruption.

In an effort to boost such efforts at modernizing Santos, Brazil’s President-elect, Jair Bolsonaro, is putting together a government team and declaring various policy goals and options, including the privatization of all the port authorities. 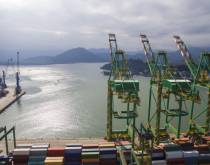 16 Sep 2019
Brazilian cotton exports to China are booming amid the US-China trade war, but stakeholders say the boost is highlighting carrier capacity shortages and sub-par infrastructure in the South American country.
MORE »

Stop-gap for Santos truck congestion moves forward
05 Oct 2017
“The expectation is that the work on the short-term solution will begin later this year.”

Fines, disruption follow in wake of Log-In accident
22 Sep 2017
The Port of Santos may have to close for lengthy periods to lift some of the missing containers from the seabed.

Rail seen as protection against rising Brazil cargo theft
12 Sep 2017
“Today only between 2 and 3 percent of throughput at the port of Santos goes via rail.”

Brazil could have privatized dredging by end of year
25 Aug 2017
The Brazilian government has established a working group to explore the privatization of dredging operations and set a 90-day deadline.

Brazil’s Log-In reels from boxes lost overboard, lower volume
17 Aug 2017
Log-In Logistica is reeling following the loss of 47 containers into the sea and a decline in volumes in the second quarter.

Santos progresses toward draft restoration
11 Aug 2017
The new depth is still shy of the original draft.

Court orders Santos emergency dredging resume
04 Aug 2017
The situation is so acute at Santos that it has grabbed the attention of the highest levels of the federal government in the capital of Brasilia.

Marginal Santos draft gains brings some shipper relief
12 Jul 2017
Neither Codesp, nor CPSP could say when the full draft would be restored.

Boxes pile up at Santos as dredging woes deepen
05 Jul 2017
The draft restrictions are particularly problematic for Santos because of the seemingly ceaseless upsizing of tonnage taking place on the east coast of South America.

Inefficient Santos bunkering breeds delays and higher costs
03 Jul 2017
Carriers can lose up to 16 hours as vessels wait to be refueled.

Weeklong customs strike to hit Brazilian ports
21 May 2017
Labor actions have already caused delays at Santo marine terminals by putting thousands of containers in limbo because they can't be cleared.

Largest ship at Santos heralds north-south cascade
17 May 2017
Although vessels of more than 9,000 TEU have called at Santos, they have not been as long as the Hyundai Loyalty.

Two-day strike disrupts Brazilian ports
16 May 2017
Shippers in Brazil are facing cargo delays at all the main ports Tuesday and Wednesday.

Brazilian ports hurt by general strike but less than feared
28 Apr 2017
The strike hit Santos with “paralysis and dislocations.”

Brazilian ports prep for general strike
27 Apr 2017
“Every port will be on strike.”

New parking lot key to easing Santos congestion
04 Apr 2017
The parking lot should be up and running by some time in 2019.

Explosion deals Santos shippers disruption again
06 Jan 2017
Shippers using the port of Santos are grappling with delays after an explosion on Thursday afternoon.
End to customs slow downs at Brazilian ports in sight
23 Dec 2016
Shippers have seen cargo delays and higher storage fees, thanks to six months of labor actions.

Cabotage calls return as Santos terminal recovers volume
20 Dec 2016
The return of coastal services to the Embraport terminal in the port of Santos gives a much-needed Yuletide boost to the ailing facility.