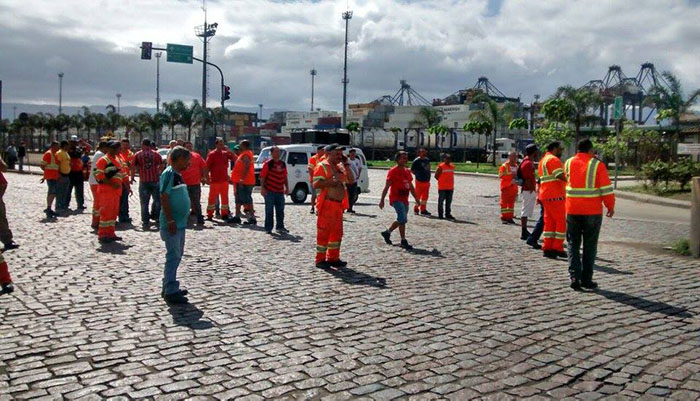 Santos stevedores mill about outside the port as part of a wildcat strike Thursday, September 22, 2016. Credit: Paulo Passos

Several dockworkers stormed a container ship berthed at Santos as part of ongoing industrial action in the harbor and were promptly arrested, triggering a walkout by dockworkers at all the terminals in South America’s busiest port for two hours.

Wednesday’s wildcat strike comes as the port reels from daily slowdowns by customs officials, a backlog from a temporary closure from flooding, and regular protests by dockworkers regarding pay increases and job guarantees for the OGMO casual labor pool.

The strike was kicked into motion when seven OGMO longshoremen boarded the Hong Kong-flagged Ocean Blue with a capacity of 2,824 twenty-foot-equivalent units at 8 a.m. local time Thursday as the ship was berthed at Grupo Libra’s T-35 facility in Ponta da Praia. Those seven, and an eighth who helped them board, were then arrested. As news of the arrest spread, dockworkers downed tools and brought the port’s container, dry bulk, liquid bulk, and breakbulk facilities to a standstill from 1:30 p.m. to 3:30 p.m.

The longshoremen’s union Sindestiva said that “foreigners” were performing cargo operations and this left them no choice but to take drastic action. It is unclear who those foreigners may be, but they are presumably ships’ crew members.

“Sindestiva seems to continually make this accusation without foundation in fact,” said a spokesperson for the Santos Port Operators Association. “We have to repeat again: there are no foreign workers handling the cargo in the port of Santos.”

Operations at Santos have largely returned to normal, but protests outside the entrances Tecon Santos, Brasil Terminal Portuario and the two Libra terminals continued all day Thursday and earlier Friday, leading to some delays.

Sindestiva and the OGMO have been protesting throughout the summer for a 10 percent pay rise back-dated to March, a meal allowance rise from 20 reais ($6.11) to 30 reais ($9.16) per day, and continuation of 50 percent OGMO workers on every ship, or 100 percent of every other gang.

Sindestiva has walked off the job despite the fact that the union last year signed an agreement with terminal operators that was to take effect July 1 and reduce the percentage of OGMO labor working ships from 50 percent to 33 percent.

The OGMO casual labor pool is more expensive than the terminals’ own labor force, so operators have been trying to reduce their reliance on the pool to pull down costs.

How to Improve OTIF: 15 Tips for On Time and In Full Delivery
END_OF_DOCUMENT_TOKEN_TO_BE_REPLACED