The Pacific Ocean port of Manzanillo, the largest containerized port in Mexico. The main gateway for international trade with Mexico, Manzanillo was not only the main portal for trade between Mexico and western ports in the U.S., Canada, and South America, but for trade between Mexico and various Asia-Pacific destinations in Indonesia, Australia and Russia. In addition to handling containerized traffic, the Port of Manzanillo is equipped to handle bulk products such as cement and fertilizers, petroleum products, and bulk agricultural products such as wheat, fish oil, palm oil, and refrigerated foods and fluids. The port also features a cruise terminal.

From the Port of Manzanillo, various services provide connectivity that enables products to move quickly and efficiently in every direction. This includes northward to the United States and Canada; southwards towards Guatemala, Colombia and Chile; westward, across the Pacific to Japan, China, India, Malaysia, and Singapore; and eastwards across the Atlantic to Spain, Russia, and Germany

Recent expansions of its capacity include a new Specialized Container Terminal II, with 13.6 million tons of capacity, and the Multi-Purpose Terminal, with 2.46 million tons of capacity. The construction of a new railway tunnel enables railroad traffic to flow directly into the port 24 hours a day. Key products for that service include beer, sugar, copper, steel tubes, coal and resin. 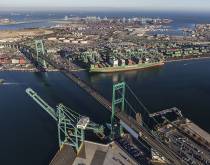