The Port of Lázaro Cárdenas, Mexico’s second-busiest port. This deepwater seaport is equipped to accommodate post-panamax vessels, and handles containerized cargo, dry bulk, and liquid cargo. A new semi-automated terminal, opened in 2017, has the capacity to handle more than 1.2 million containers per year, increasing Lazaro Cardenas’ overall capacity to 29 million tonnes. As a result of continued congestion at Long Beach and Los Angeles, Lazaro Cárdenas is expected to act as an alternative gateway for some shippers seeking timely delivery to their customers on the US Pacific coast. Well-connected to Mexico City, just 620 kilometers away. Moreover, Lazaro Cardenas is also directly connected to numerous locations within Mexico and the United States by the Kansas City Southern de Mexico rail network.

While Gulf Coast ports predominantly handle cargo to and from Europe and the US, Lazaro Cardenas and Manzanillo handle a combined total of about 60 percent of Mexico’s port throughput, with much of it going to and from Asia. 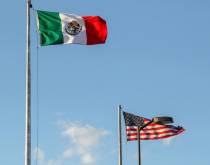 24 Jun 2020
Mexican businesses and their US and Canadian partners are focused on rebuilding supply chains shattered by COVID-19 and the recession, but they shouldn’t forget USMCA.
MORE »

Protests again disrupt rail service into Lázaro Cárdenas
24 Oct 2019
The third blockage this year of the main rail line into the Mexican Port of Lázaro Cárdenas, which is operated by Kansas City Southern of Mexico (KCSM) will likely add to shipper fears that moving cargo by rail is unreliable.

SSA to open specialized Lazaro Cardenas ro-ro terminal
18 Oct 2017
The facility will be the first in Mexico dedicated exclusively to handling vehicles.

Mexico's Nieto: Port expansion a pledge to free trade
07 Apr 2017
In April 2015 the government said it will increase capacity and improve infrastructure and operations at the country’s ports.

Veracruz, Lazaro Cardenas focus of major Mexican port investment
09 Jul 2015
When it comes to containerized traffic in manufactured goods, the key ports in Mexico’s $5 billion port infrastructure initiative will remain Veracruz on the Gulf, where volumes have soared from 543,000 TEUs in 2001 to nearly 850,000 in 2014 and a projected 894,000 TEUs this year, and Lazaro Cardenas along the Pacific coast, which is handling 1 million TEUs a year, a decade after opening.

ONE latest carrier to lean on Kontainers for instant rate tool