The Port of Altamira is located on Mexico’s Gulf coast, just north of the port city of Tampico at the southeastern tip of Tamaulipas state. For many shippers, Altamira offers convenient land and rail connections that link it directly to the northern and central parts of the country, including such important cities such as Monterrey, Saltillo, Reynosa, Guadalajara, and Mexico City, located about 310 miles southwest of Altamira. Overall, about half of Altamira’s cargo either originates in -- or is destined for -- the northern states of Tamaulipas, Nuevo León, and Coahuila. About 28 percent of its cargo either comes from -- or is destined for -- the central Mexican states of San Luis Potosí, Zacatecas, Jalisco, Guanajuato, and Querétaro.

The Port of Altamira, which serves shippers in a broad range of industries, also offers maritime connections to some 125 ports around the world through various shipping lines that handle general and containerized cargo. Its railroad connections are with Ferromex (the largest railroad in Mexico), Ferrosur (which largely serves southeastern Mexico) and Kansas City Southern, whose extensive rail network includes destinations in both the United States and Mexico. 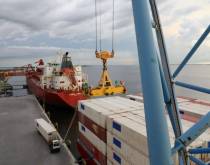 18 Dec 2020
A weekly service will carry 53-foot domestic intermodal containers between Tampa and Brownsville, Texas, for cross-border shipments between the United States and Mexico.
MORE »

Altamira growth speeds up despite slowing Mexican economy
16 Oct 2019
Mexico’s fourth-largest port by volume is bucking the trend of slower cargo growth by posting solid gains in volume this year that far outpace the rise in cargo through all Mexican ports combined.

Mexico's Tuxpan port grows as gateway to US
24 Jan 2019
Mexico's port of Tuxpan has found a niche offering an alternative to truck and rail on cross-border trade, as the port seeks to fulfill its potential.