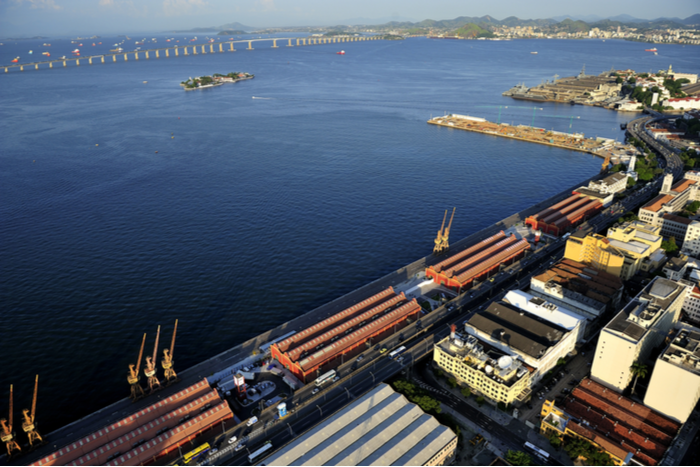 Exports from Rio de Janeiro were up 11.39 percent during the first five months of this year, to 39,613 TEU. Photo credit: Shutterstock.com.

With International Container Terminal Services, Inc. (ICTSI) having won the bidding for Libra Terminais Rio, the new owner will now shift its focus to winning new volumes and boosting utilization of the 530,000 TEU-capacity terminal in Rio de Janeiro.

ICTSI’s ownership is seen as a win for shippers, who now expect a spirited competition for business among a reinvigorated Libra Terminal and Rio market rival terminals Multi-Rio and Sepetiba Tecon. Up for grabs is a container market that clocked in at 400,000 TEU last year, but is on the rise.

“It is great for shippers that after all the uncertainty a buyer has been found for Libra Rio, as it will bring back a proper three-way fight for cargo,” the manager for a Rio de Janeiro-based shipping agency told JOC.com. “They have the same capacity as Multi-Rio, yet Libra has only 30 percent of the market while Multi has more than 45 percent, so they have some catching up to do.”

Libra Rio handled 135,000 TEU last year, just a quarter of its 530,000 TEU capacity. Its peak throughput was 235,302 TEU in 2012, so the potential for growth is obvious. The terminal suffered from a lack of investment over the past two years, owing to the uncertainty surrounding the Libra Terminais group and burdened by more than 1.8 billion reais ($457 million) of debt and administration.

One of the first moves for Libra’s new owners will be to try to persuade the northbound sling of the Sino South America (SSA) service from Asia to the East Coast of South America (ECSA) to call at the downtown Rio de Janeiro facility. This would be a major win as SSA — comprised of Pacific International Lines (PIL), CMA CGM, Cosco, Evergreen, and Yang Ming — is increasing several of its ships’ capacities from 4,000 TEU to 6,500 TEU, so a significant amount of extra movement could be in the offing.

“It will be interesting to see where the northbound leg of SSA goes when that comes to fruition,” the Rio shipping agency manager said.

Brazil ICTSI wouldn’t expand on its plans for Libra Rio because the $187.2 million deal inked in mid-July still needs clearance from Brazilian regulators. Still, sources in Brazil view that as a formality because ICTSI only has one other operation in the country — almost 1,000 miles from Rio in Suape.

“I think ICTSI will find Rio a much more complex market than Suape where they have operated without competition for more than 15 years,” said the ship agency source.

Libra Rio’s regular services are currently the Tango and UCLA to the United States, the SAMWAF to West Africa, ESA Loop 1 to Asia, and CONOSUR/ABAC from Brazil to Chile via Argentina. On top of that, they have the Log-In feeder service from Vitoria to Rio.

Exports from Rio de Janeiro, traditionally an import port, were up 11.39 percent during the first five months of this year compared to last year, from 35,564 TEU to 39,613 TEU. Imports for the period were up 7.7 percent to 53,124 TEU, according to Datamar.

This boost in exports is the reason SSA is considering adding a northbound Rio de Janeiro call to help fill extra capacity, possibly up to 20,000 TEU extra per month. Other carriers are also considering the same move for their Asia/ECSA services, although they do not want to see the freight rates slide disastrously as they did three years ago.

Since it was launched in June, the SSA service calls Sepetiba (also known as the port of Itaguaí) southbound, then Santos, Paranaguá, Navegantes, and Itajaí, but presently skips Sepetiba and Rio northbound.