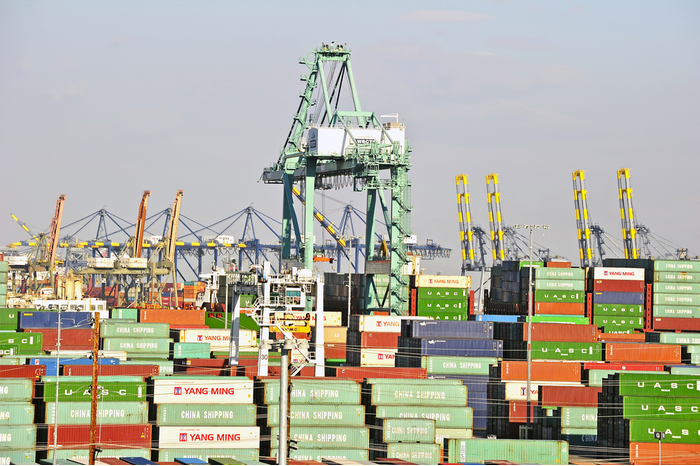 For high-volume terminals on limited footprints in growing gateways, either full or semi-automation may make sense and could even become a necessity, Moody’s Investors Service says. Photo credit: Shutterstock.com.

Growing vessel sizes and container exchanges are motivating terminal operators at the busiest North American and global gateways to automate some or all cargo-handling functions to efficiently handle increasing container volumes, according to a report by Moody’s Investors Service.

Moody’s listed 46 fully or semi-automated terminals in 22 countries in North America, Europe, the Middle East, Latin America, and Australia-New Zealand in various stages of operation, including two in Southern California, one in New Jersey, and two in Virginia. Those terminal operators automated to gain operating efficiencies, improve their competitive position in the industry, maximize land-use efficiency and capacity, lower labor costs, and meet stricter environmental standards, the report stated.

“With the ability to deliver multiple benefits beyond labor savings, we expect adoption of automation to increase, both globally and in the US and Canada,” Moody’s said in the report, published June 24.

Going forward, decisions to automate may be necessitated more by growing container exchanges from mega-ships, which call for stacking containers higher and wider in the terminal yards without sacrificing productivity. The importance of peak crane productivity will be secondary in importance to steady, reliable productivity measured on a 24/7 basis. “Machines are not restricted by time of day, which can add the equivalent of a third shift at little incremental cost,” Moody’s said.

Of course, longshore unions, especially those in North America and Europe whose members enjoy good-paying jobs that are often passed down to family members, view automation as nothing more than a veiled attempt to eliminate jobs, even if automation does not deliver on originally anticipated productivity gains.

“Peak productivity [at automated terminals] does not always exceed conventional facilities, and there is a significant political and social risk associated with labor unions due to the impact on employment,” Moody’s said. That scenario is playing out in Los Angeles, where APM Terminals intends to automate 100 acres of its 440-acre Pier 400 terminal.

However, automation does not present an existential threat to labor unions because most ports and terminals are expected to handle current and projected cargo volumes through conventional operations. Investing hundreds of millions of dollars and incurring the wrath of organized labor in return for minimal expanded throughput capacity, and the possibility of not realizing all of the cost-reduction benefits promised by automation, will not be worth the effort for many operators. The analysis noted that only 3 percent of the approximately 1,300 container terminals in the world have been automated.

For high-volume terminals on limited footprints in growing gateways, either full or semi-automation may make sense and could even become a necessity. “Automated terminals support efficient land use and the ability to expand vertically without degrading productivity,” Moody’s said. “Automation provides consistent, reliable performance, which is especially critical as vessels and cargo exchanges increase in size.”

Full automation is best suited to high-volume gateways in North America and Europe that generate local as well as discretionary transshipment cargo. These terminals regularly handle large vessels of 10,000 TEU-plus capacity that generate huge container surges that must be handled in a high-density environment. In other words, throughput-per-acre of 10,000 TEU is handled day in, day out, in an efficient manner, around the clock.

“The industrial logic is strongest for facilities handling both local and discretionary or transshipment volumes brought by mega-ships,” Moody’s said. “Mega-ships’ load/discharge patterns require consistent and reliable performance, added storage capacity that is maximized through ground-slot density, and the ability to extend the daily operating window — for example, to better optimize the container stack or to handle gate transactions — without meaningful incremental costs, in order to distribute activity over a 24-hour period and maintain acceptable productivity.”

The 311-acre Long Beach Container Terminal (LBCT) Middle Harbor terminal, in operation since 2017, fits this description. When completed in 2021, it will have an annual throughput capacity of 3.3 million TEU. Automated stacking cranes (ASCs) in the container yard can operate around the clock with minimal human involvement. The ASCs work all night at the direction of the terminal operating system (TOS), shuffling containers around in the stacks so they are positioned for the arrival of drayage trucks the next morning.

Moody’s describes these moves within the container stacks as necessary but “unproductive moves.” A move is considered productive if it delivers the container to a trucker. However, moving containers within the stack to position them for delivery to the trucker is crucial. Moody’s argues that using ASCs to do the positioning work at night without almost no human involvement gives the terminal a huge productivity boost at almost no cost to the operator.

However, the LBCT automation price tag is about $1.4 billion. Many of the other 11 container terminals in Los Angeles-Long Beach may not need to invest that much money upfront, especially if their annual volume is only 1 million TEU or less, so full automation is not for them. The same argument applies to many terminals in North America, which is why LBCT, at 3.3 million TEU throughput capacity, and TraPac, with its annual throughput capacity of about 2 million TEU, may be the only fully automated container terminals in North America for sometime to come.

However, semi-automation, such as deployed at the Global Container Terminal in New Jersey and two terminals in Virginia, achieve the density — container throughput per acre — that is needed for their operations without the massive upfront costs such as $1.4 billion at LBCT, and about $700 million at TraPac. A semi-automated terminal automates the cargo-handling lifting functions in the yard ASCs, but the horizontal transportation of moving containers from the berth to the stacks in the yard is performed by conventional yard tractors driven by longshore workers.

The International Longshoremen’s Association on the East Coast has grudgingly accepted semi-automation because it preserves dozens of yard-tractor jobs on each shift. However, since the ASCs can stack containers densely in the yard, semi-automated terminals get high throughput per acre. The ASCs also provide consistent, reliable, around-the-clock performance, Moody’s stated.

“By converting to a semi-automated system at Norfolk International Terminal South, the Virginia Port Authority will increase capacity by 47 percent on the same footprint,” it said.

Moody’s was careful in analyzing the meaning of “productivity” when it relates to automation. At conventional terminals, so-called peak productivity can reach 40 container moves per crane per hour. The International Longshore and Warehouse Union (ILWU) on the West Coast notes, correctly, that productivity at automated terminals is only about 25 to 30 moves per hour. Moody’s states, though, that due to fatigue, shift changes, lunch breaks, etc., conventional terminals cannot maintain 40 moves per hour through two consecutive shifts. An automated terminal at which the ASCs work around the clock can deliver 25 to 30 moves per hour, 24 hours a day, equaling or eclipsing total productivity at a conventional operation during two shifts.

“While automation may require operators to accept a lower, but ultimately satisfactory, level of crane productivity — on the order of 25 to 30 crane moves per hour, compared to 30 to 40 crane moves per hour for conventional operations — this is balanced, in part, by a more consistent  level of performance over time,” the report stated. “Furthermore, because automated yard cranes can operate around the clock unmanned, a significant number of additional yard moves can be performed in the same 24-hour period.”

Labor costs are without doubt a major consideration of terminals that decide to automate, and Moody’s noted that automated terminals have 40 to 70 percent lower labor requirements. “Labor accounts for more than 50 percent of the cost structure of a conventional terminal operator,” it said.

Reducing labor costs versus preserving jobs is the issue that is keeping the ILWU in opposition to the move by APM Terminals in Los Angeles to introduce a new type of automation to North America — automated straddle carriers. Driverless auto-strads will be used to move containers from the berth to the container stacks and from the stacks to drayage trucks. Costly ASCs will not be needed.

The knock against auto-strads is that they sacrifice density for reduced labor costs. Rubber-tire gantry cranes in the conventional terminal yard, or ASCs at automated and semi-automated terminals, can operate over stacks that are five to eight containers wide and five or six containers high. Auto-strads can only operate one row wide and three containers high. However, APM, at least initially, is automating only 100 acres of its 440-acre facility, at one-third of the cost of a fully-automated terminal, so APM believes it can sacrifice density on less than 25 percent of the terminal for a significant reduction in labor costs.

However, the ILWU is obviously concerned about the potential scalability of the auto-strad model. Since many West Coast terminals are 100 to 150 acres in size and handle 1 million TEU or less per year, those operators may opt for the auto-strad model since up-front investment costs are much less than at a fully automated terminal and daily operating costs are much lower than at conventional terminals.

Yet another advantage of automation is its residual benefit of slashing emissions because the equipment is powered either by electricity or battery power. Moody’s noted that LBCT is already almost fully compliant with the goal of zero-emission cargo-handling equipment by 2030 stipulated in the Los Angeles-Long Beach Clean Air Action Plan (CAAP), while the 10 conventional terminals face aggregate costs approaching $3 billion in equipment replacement and infrastructure costs just to comply with the CAAP.

Most US ports and terminals do not face the capacity challenges of Los Angeles-Long Beach, which handled 17.5 million laden and empty TEU in 2018, or California’s strict environmental regulations, so automation is something they can address years from now, if at all.

“These ports may be able to achieve higher peak productivity while operating profitably and avoiding significant additional costs involved with converting to automation,” Moody’s stated.