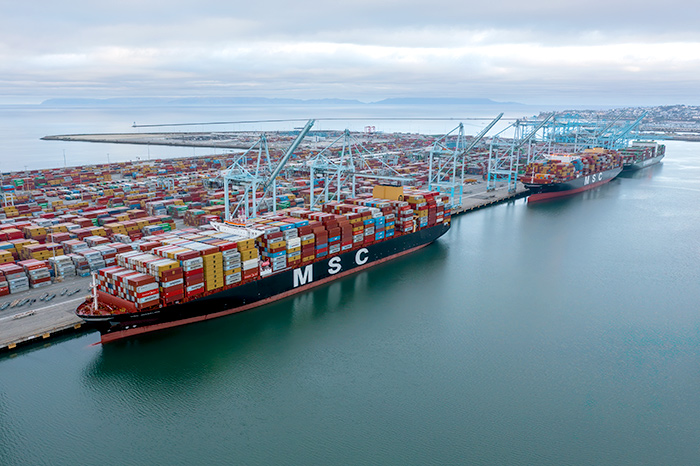 Average on-terminal dwell time for non-rail imports across all 12 terminals at LA–LB grew from three days to more than five days between July 2020 and July 2021. Photo credit: Kirk Wester/Shutterstock.com.

With a record vessel backup of 47 container ships waiting outside the ports of Los Angeles and Long Beach during the Aug. 28 and 29 weekend, the core problem facing container logistics — the slowdown in the circulation of ships, containers, and chassis that is draining capacity and driving spot rates to record levels — is clearly worsening.

Although there are direct causes of the gridlock, it is the loss of effective capacity when ships sit for longer outside of ports and containers are not picked up and returned quickly enough that explains record spot rates that still can exceed $30,000 per container to the US West Coast, as well as high demurrage and detention costs and lengthening transit times.

When containers take longer to be repositioned back to origin ports, they are not available to pick up new loads. When ships are anchored offshore, they miss subsequent scheduled departure dates, resulting in canceled sailings and the removal of much-needed capacity. That is fundamentally why many believe it will take well into 2022 for the congestion to unwind — because a system of literally millions of assets will have to return to a normal circulatory flow.

Such is the extent of the asset slowdown that industry leaders say that if assets were circulating normally, there would be no capacity problem, even at today’s higher levels of demand versus 2020.

As OOCL said Aug. 20 in announcing the highest first-half profits in its history, the series of shocks sustained this year “have combined to slow down the velocity of circulation of container boxes across the network, as well as to slow down the progress of container ships traveling from port to port. The network continues to see multiple operational disruptions, reducing the ability of container shipping companies to satisfy the strong levels of customer demand.”

In Los Angeles–Long Beach, the asset slowdown is seen clearly in average on-terminal dwell time for non-rail imports across all 13 terminals in the busiest US port complex, which grew from three days to more than five days between July 2020 and July 2021, according to the Pacific Merchant Shipping Association. That, in turn, is related to backups at distribution centers where containers are delivered but taking longer to unload or taking longer to be picked up from the marine terminal.

“We’re urging — and in some cases imploring — our import community to pick up your cargo quickly, de-van it, get it through the warehouse system,” Port of Los Angeles executive director Gene Seroka told CNBC Aug. 24. “We’ve got to ingest all of this massive cargo into the domestic supply chain much quicker than we’ve shown to do thus far.”

The compounding impact of multiple shocks — among them the Suez Canal blockage in late March and partial shutdowns of the Yantian and Ningbo ports — has turned the asset slowdown into a global phenomenon that will not ease until volumes do. Given holiday-season volumes, stimulus spending, and restocking of depleted inventories, that might not happen until after the 2022 Lunar New Year, which begins Feb. 1, or possibly even later, multiple industry insiders continue to tell JOC.com.

“There’s really no break where congestion might ease until at least the end of 2022,” technology provider Blume Global said in a Sept. 1 blog.

The slowdown is systemwide, involving ships, containers, and chassis.

“An unquantified amount of capacity related to ports, trucks, rail, and chassis has…been removed from the market as the bottlenecks cause each of these to be tied up much longer than normal,” Lars Jensen, CEO and partner at Vespucci Maritime and a JOC.com analyst, wrote in early August.

Hapag-Lloyd expanded its container fleet by 12 percent since the onset of the COVID-19 pandemic and on Aug. 30 announced an order for an additional 75,000 containers, which will expand its fleet by a total of 15 percent versus pre-pandemic times. But because the average time it takes containers to return to origin has expanded 50 to 60 days, the increase in Hapag-Lloyd’s container fleet has not resulted in an increase in effective capacity. “Today, about 20 percent more containers are bound in shipment while transporting the same amount of cargo before the crisis,” Hapag-Lloyd CEO Rolf Habben Jansen said in a statement announcing the latest equipment order.

“We find that some 20–25 percent of container capacity on trans-Pacific is lost to the congestion/delays, while the figure is 12–13 percent for Asia–Europe, while approximately 10 percent of the global fleet is absorbed by congestion/delays,” said Alan Murphy, CEO of Sea-Intelligence Maritime Analysis.

Seen in a different way, the volume carriers are moving is significantly below their nominal deployed capacity. From March through July, vessels in the eastbound trans-Pacific trade carried significantly fewer containers than their total capacity would suggest. And that is despite all-time high freight rates and carriers continuing to make tough decisions regarding which customers’ cargoes get loaded.

Carriers deployed 1.37 million TEU of capacity each month to the US West Coast between March and July, according to eeSea, a platform that maps carrier schedules, while actual laden TEUs carried averaged about 1 million TEU per month, according to PIERS, a sister product of JOC.com within IHS Markit. Carriers deployed an average of 661,268 TEU capacity per month to the US East Coast during the same five months, while laden TEU carried averaged 521,00 TEU per month.

In the deregulated container shipping market, where supply and demand has long dictated rate levels, the reduction in actual capacity because of the slowdown in asset circulation goes a long way to explain highly elevated rate levels.