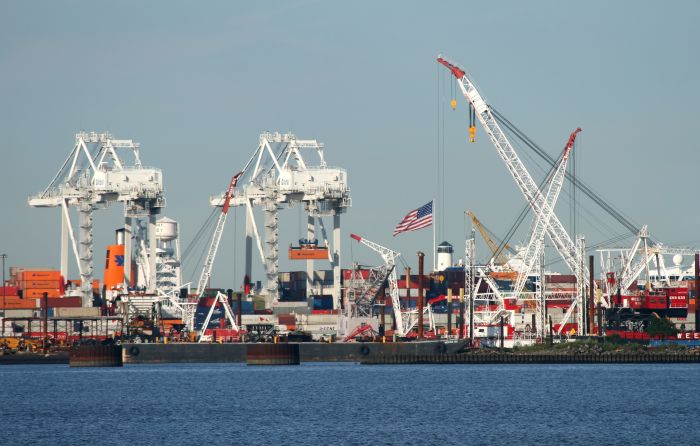 “We have this blood-sucking group, draining profits from companies, chasing businesses away from this port and absolutely failing to root out corruption,” Daggett said in a Wednesday night speech at the 100th annual dinner of the Foreign Commerce Club of New York.

“Hell, the ILA has done more for reform in the last 10 years than the Waterfront Commission ever did over 60 years,” Daggett said, citing the union’s code of ethics and independent ethical-practices monitor.

It wasn’t the first time Daggett has urged abolition of the commission. Unique to New York-New Jersey, the agency conducts criminal investigations, licenses dockworkers, and regulates the size of the port’s ILA workforce. The commission’s $12 million annual budget comes from a 2 percent assessment on port companies’ payrolls.

The ILA and its employers have accused the commission of overstepping its authority to interfering with hiring rules set out in collective bargaining agreements. The commission says it is merely fulfilling its responsibility to ensure fair and nondiscriminatory hiring.

A federal judge in August dismissed a union-employer lawsuit challenging the commission’s actions on hiring. The ILA, the New York Shipping Association and the Metropolitan Marine Maintenance Contractors Association have appealed.

A bill moving through the New Jersey Legislature would withdraw the state from its 1953 compact with New York that created the commission. Waterfront Commission officials say New Jersey lacks authority to unilaterally dissolve a congressionally approved bistate compact.

New Jersey passed legislation in 2007 to to revoke the commission’s authority to regulate the size of the port’s longshore workforce. That bill, however, was contingent on New York’s passage of identical legislation, which has gone nowhere.

During the last year, labor and industry officials and the commission have blamed each other for slowing the hiring of several hundred ILA workers that all parties agree are needed to alleviate labor shortages and handle growth in cargo volume.

In recent months, hiring has proceeded under close scrutiny from the commission. New workers are being added under a formula in the ILA-NYSA local contract that earmarks 51 percent of new jobs for military veterans, 25 percent for ILA referrals, and 24 percent for referrals through NYSA. Previously, virtually all job applicants were referred by the union.

Daggett urged Foreign Commerce Club members, who represent an industry cross-section including shippers, carriers and intermediaries, to “join our fight against this costly and unnecessary Waterfront Commission.”

“Anyone trying to run a company here in the Port of New York and New Jersey has to worry about ILA members {being} subjected to Nazi-type abuse by the Waterfront Commission,” he said. “The situation is reaching a boiling point -- my members are not going to stand for it much longer.”