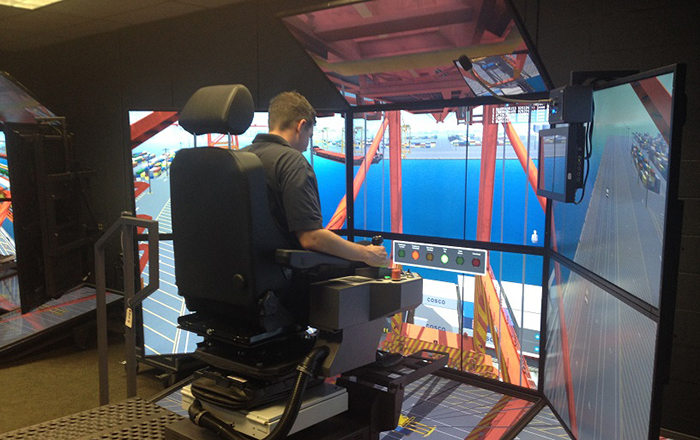 A crane simulator such as the one pictured will help expand the use of barges at terminals in the Port of New York and New Jersey.

The Port of New York and New Jersey plans to create what it says will be the first state-of-the art training center at a port on the East Coast that will use three computerized simulators to improve the skills of crane operators, with an eye to improving efficiency at the port.

The center, known as the New York Harbor Crane Operator’s Training Center, will train members of the International Longshoremen’s Association at the nation’s third-largest port to operate the “newest generation” of ship-to-shore and yard cranes on a simulator with a cabin, similar to that used by airline pilots.

The installation of the machines is expected to begin in January, according to the New York Shipping Association, which helped put the initiative together.

The initiative comes as the port, like others, is looking for ways to increase efficiency amid the additional stress on port resources and personnel from the arrival of larger ships, and to cut truck traffic and pollution. Port officials say the long-term effect of better trained operators would be to optimize the loading and unloading times.

“We have 60 cranes in the port and we don’t have a simulator,” said John Nardi, the association president, adding that it typically takes months to train an operator. “So to train people, we have to put them up in a live container crane, and it’s a very arduous process that takes a lot of time. So what we would like to do is train people in a simulator first, and then move them onto the crane.”

The port of New York and New Jersey last week was awarded a grant of $492,480 to buy two simulator machines for the project under the Marine Highway Grant Program. The New York Shipping Association and Port Newark Container Terminal will contribute another $328,320 needed for the project, some of which will be used to buy a third machine, Nardi said.

“Crane productivity (gross moves per hour) affects the one variable cost in a viable Marine Highway System — labor,” the Port Authority of New York and New Jersey said in its grant application to the US Department of Transportation, which oversees the grant program.

“Increased crane productivity would decrease labor costs and help promote a more sustainable, cost competitive, and marketable alternative to over-the-road transportation,” the application said. “A single move per hour increase could result in tens of millions of dollars in cost savings.”

An additional move would add 4 percent to the capacity of each crane and berth at the port, the application said. It said the port has 262 certified crane operators at present.

Increased efficiencies would particularly help barge routes because every container moved by barge has to be lifted twice, the port authority application said. It added that “the extra precision and dexterity needed to operate large ship cranes with smaller vessels like barges often hampers productivity.”

Two of the simulators will be based at the existing training center run by the association and the ILA in the Maher Terminals facility in Elizabeth, and the third machine will be at the Port Newark Container Terminal, he said.

Although the crane simulators are still rare, some simulator-based, crane training facilities are in operation. The Port of Tacoma installed one last year, and four others are expected to be installed on the West Coast, according to the Pacific Maritime Association. The simulators can be used to train workers on ship-to-shore, rubber-tire gantry, ship pedestal and harbor mobile cranes, the association said. The Maritime Institute of Technology and Graduate Studies in Maryland said it also offers crane training on simulators.

The program funding was part of a $1.6 million grant that also will fund the enhancement of the fender system at the barge terminal in Port Newark, and pay for high-tech machines to augment existing container handling equipment at Red Hook Container Terminal.

The Port Authority said the barge operations in 2015 resulted in 60,000 fewer truck trips on the region’s roadways, and eliminated 1,600 tons of carbon dioxide.