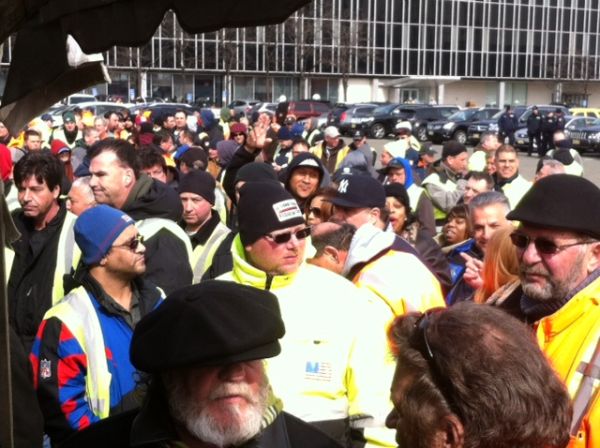 Longshoremen rally against the Waterfront Commission of New York Harbor.

Daggett joined officials from the New York Shipping Association, New Jersey AFL-CIO, the state Chamber of Commerce, and organizations representing motor carriers, automakers, maritime interests, retail merchants, and other unions, including the Teamsters, at a rally at Maher Terminal.

The rally wasn’t supposed to be a stop-work meeting, but dockworkers at some terminals left their jobs without warning to attend. NYSA President John Nardi said the interruption was unsanctioned. Daggett told dockworkers to return to their jobs after the rally. “Don’t go to lunch, don’t go to your favorite bar. Go back to work,” he said.

Dockworkers cheered as several business, labor and political officials blamed the Waterfront Commission for delaying the hiring of several hundred ILA members. The commission, created in 1953 to root out crime on the docks, licenses workers and sets the size of the longshore workforce.

“We’re the only port in America that has to jump through such bureaucratic hoops just to fill one empty position, let alone the hundreds that remain,” said NYSA President John Nardi. “We need a right-sized workforce of well-trained, diverse, and capable individuals as determined by the employer, not a quasigovernmental agency.”

Daggett said the commission is interfering with the NYSA-ILA contract and “corrupting safety standards for longshoremen, destroying productivity, and denying employment. They are wrecking our port.”

“If we were a foreign country and workers were treated the way the Waterfront Commission treats our ILA members, the United Nations would bring charges against them and they would be condemned,” he said.

The Waterfront Commission issued a quick rebuttal. The commission said claims it is delaying dockworker hiring are “unequivocally and demonstrably false” and that the NYSA and ILA officials have misled their business, political and labor allies about the commission’s dispute with the industry over longshore hiring.

The coalition “apparently relied solely on the misrepresentations of the NYSA and ILA who, over the past several months, have been forced to retract similar accusations of delay in hiring,” the commission said in a statement.

New Jersey’s commission member, Jan Gilhooly, said he was “greatly troubled that continuous misrepresentations are being made to elected New Jersey officials, members of the media, and members of the industry. As a 30-year veteran of the United States Secret Service, I will stake my integrity and that of the commission against that of the NYSA and ILA.”

The commission and industry have been battling for months over the agency’s new hiring rules. Those rules, which the commission says aim to increase workforce diversity, would reduce the ILA’s traditional role in referring candidates for employers to vet and the commission to license.

The NYSA and ILA have asked the commission to approve 682 new hires, mostly to fill current and pending vacancies. Amid port-wide labor shortages, some dockworkers have agreed to stay on past April 1 when they will collect enhanced pensions for leaving the workforce.

Hiring of the first 225 of those workers is proceeding slowly after months of delays for which the industry and commission blame each other. In addition, hiring has been virtually halted for ILA mechanics employed by companies in the NYSA and the Metropolitan Marine Maintenance Contractors Association.

Randy Brown, president of the Metro association, said companies in the two associations have nearly 100 mechanic vacancies, “and you don’t grow mechanics on trees.” He said employers had to curtail training because workers can’t take time off their jobs, and that workers are logging excessive overtime hours.

Shortages of ILA mechanics have been widely blamed for a backlog of out-of-service chassis that has contributed to weather-related delays at the port this winter.

The ILA, NYSA and Metro association have filed a federal court challenge of the commission’s new hiring rules. The commission has asked U.S. District Judge Susan Wigenton of Newark to dismiss the lawsuit.

Speakers at today’s rally urged New York legislators to strip the commission’s authority to set the size of the longshore workforce. New Jersey passed such a bill in 2007, but it can’t take effect without New York’s concurrence.

“What we’re trying to do is to focus attention on this and hope they follow suit” in New York, Braken said.

The commission has restricted the number of longshoremen in the port since 1969, when the NYSA and ILA negotiated a now-defunct guaranteed annual income program to offset the loss of jobs from containerization.

Waterfront Commission officials say their hiring rules are needed to increase diversity. Employers and the ILA say their workforce is already diverse. More than one-third of longshoremen and clerks in the port are black or Hispanic, NYSA statistics show.

“The Waterfront Commission’s attack on diversity is all smoke and mirrors,” Daggett said. “It’s an attempt to break the union.”

The union and employers have accused the Waterfront Commission of illegally interfering in that agreement by micromanaging its implementation. The commission says it is fulfilling its mandate by enforcing diversity and preventing favoritism in hiring.

Nardi said the NYSA-ILA contract “represents the most revolutionary changes in the hiring practices in the history of the port ... However, to implement the key provisions of our contract we need to be able to hire the number of people as determined by the needs of the employer as would any other employer, in every other port in the U.S.”

The commission issued its new rules in early September, but that hiring was stalled until February by disputes with the commission over how the rules would be implemented. “They kept moving the finish line,” Nardi said.

The commission said it “has not been the source of any labor shortages or slowdowns in the port. To the contrary, we have openly criticized the glacial pace at which the NYSA is moving with regard to getting longshoremen sponsored and working in the port.”

Wow! This is very

Permalink Submitted by michaelpitt@roc... on Mar 25, 2014 4:27PM EDT
Wow! This is very intreresting.. Made for TV drama,lol...Bravo should turn this into a reality series. The ratings would be off the meter!!!!!

No one would ever believe the