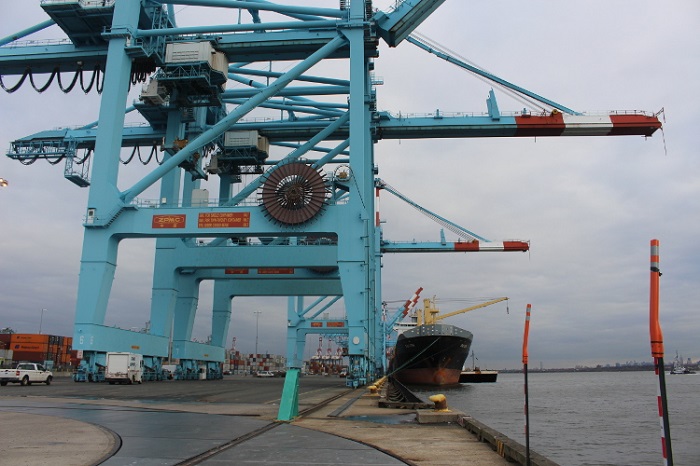 The deal removes the need for a new contract — the biggest source of labor disruptions, on both East and Gulf coasts — until at least 2024. It parallels a labor deal for US West Coast ports lasting until 2022. Longshoremen backed that deal, a five-year extension of the last contract, in July 2017. (Above: The Port of New York and New Jersey.) Photo credit: Shutterstock.com.

Rank and file of the International Longshoremen’s Association (ILA) on the East and Gulf coasts resoundingly backed a six-year master contract Thursday, adding to the five-year contract extension backed by West Coast unions last year to ensure that nationwide labor peace will last for at least four years.

ILA officials said by 10 p.m. all 59 locals voted to ”overwhelmingly” ratify the tentative agreement reached by the ILA’s leadership and the United States Maritime Alliance (USMX) in a two-day negotiating session in Delray Beach, Florida, in June. The deal, which a union release described as an “extension” of the existing contract, had been endorsed by the union’s 200-member wage scale committee at the end of the session.

The deal removes the need for a new contract — the biggest source of labor disruptions — on both East and Gulf coasts, at ports from Maine to Texas, until at least 2024. It parallels a labor deal for US West Coast ports lasting until 2022. Longshoremen backed that deal, a five-year extension of the last contract, in July 2017.

The longshoremen’s ratification of the Gulf and East coast deal provides shippers with an end to the uncertainty and fears of potential supply chain disruption if no deal was reached and the unions took industrial action.

Negotiations began in December, and fears rose when negotiations broke down the same month after a disagreement over the contract’s definition of automated terminals. In early March, the National Retail Federation and more than 100 other organizations representing beneficial cargo owners (BCOs) — anxious for a deal that spares them the need to activate costly strike contingency plans — urged the ILA and employers to act promptly.

ILA president Harold J. Daggett, the union’s chief negotiator, said the agreement was the best contract he had seen in his 50-plus year ILA career.

“ILA members covered under this ILA-USMX Master Agreement can now look to a bright future where their salaries will increase and the threat of job loss from fully automated terminals, semi-automated terminals and automated equipment is eliminated,” he said, in a statement. “Our national health care plan, MILA, remains strong and our members will benefit from increases in Container Royalty.”

He said the contract “not only protects the benefits ILA members already have, but also enhances these benefits to ensure that they are compensated appropriately for all your hard work.”

“I am particularly pleased with the jurisdictional protections that the ILA has negotiated that will ensure ILA jobs will be preserved in the years ahead,” Daggett added. “I believe that this proposed extension represents a giant step forward in the collective bargaining history of the ILA.”

David F. Adam, chairman of USMX, released a statement saying, “[W]e are pleased by the outcome of the vote.”

Both sides were keen to avoid the kind of disruption that occurred on the West Coast when a failure to reach an agreement sparked severe work slowdowns at gridlocked Southern California ports in 2014 to 2015, prompting some BCOs to start sending cargo through East Coast ports.

West Coast labor disruptions, including a 10-day lockout in 2002 and months of delays during contract negotiations in 2014 to 2015, triggered a shift in cargo volumes away from the West Coast and towards East and Gulf coast ports, which hope to retain the market share they gained.

Since 2010, the West Coast’s market share of loaded cargo has dropped from 50.45 percent, to 44.9 percent in 2017, according to PIERS, a sister product of JOC.com. The coast’s share of Asian imports fell from 73.3 percent to 66.4 percent over the same period, the figures show.

Neither side has yet released the contract, so complete details are not available. But a 14-minute video that was posted on the ILA website to encourage union members to back the deal offered some details. In it, ILA executive vice president Dennis A. Daggett, Harold’s son, said he believes the deal is “the best ILA contract ever negotiated” adding that it represents a “giant step forward” for the union.

Key among the issues outlined in the video was the contract’s position on terminal automation, a contentious issue in the talks due to its potential to reduce ILA jobs. The contract prohibits fully automated terminal operations for six years at East and Gulf ports covered by the contract, according to the video.

However, whether the contract’s definition of automation — “machinery or equipment that is devoid of human interaction” — prohibits automation likely won’t be fully clear until it is tested. Even at the TraPac terminal in Los Angeles and the Middle Harbor Terminal in Long Beach, which are seen as fully automated and considered to be the most automated in the United States, human involvement is needed.

The contract also gives union members a $1 an hour base pay increase in four years out of six, increases by $104 million the worker share of container royalties generated, and sets aside money for a defined contribution retirement plan, according to the video.