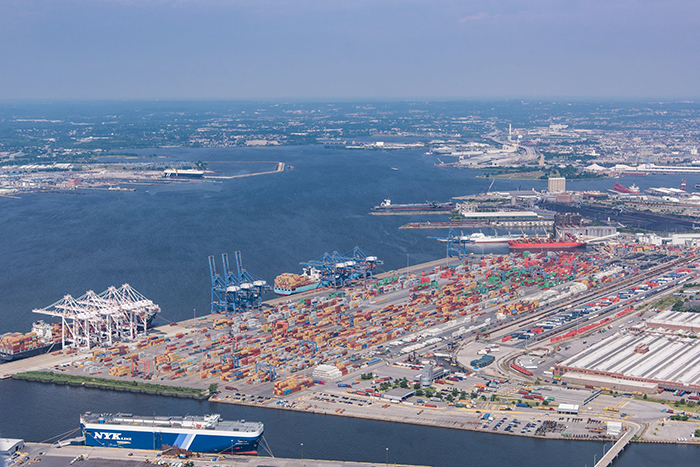 Above: The Port of Baltimore. Photo credit: Shutterstock.com.

An apparent union walkout this week at the Port of Baltimore, sparking a federal lawsuit in which employers complained of high truck turns times, due to continuing “issues,” comes just two months after the recent ratification of a US East and Gulf coast agreement.

The apparent walkout offered a reminder that although the signing of the six-year master contract was seen as a harbinger of stability along the two coasts, disputes over local issues and actions can intervene, fracturing the peace at short notice.

The Steamship Trade Association of Baltimore filed suit in US District Court in Maryland Monday afternoon claiming that members of Local 333 of the International Longshoremen’s Association (ILA) violated a no-strike clause in the coastwide master contract when they walked off the job that morning.

Judge Ellen Lipton Hollander, sitting in Baltimore, granted a temporary restraining order Tuesday, preventing the union from further violating the contract. Yet the port did not immediately return to normal, with turn times about 40 percent higher than normal due to “severe issues” in processing trucks, according to a report filed by the association on Thursday. In court papers, Local 333 said it could not confirm that turn times were higher, and suggested the employers had not used overtime to address the problem.

Further, on Wednesday, Judge George Levi Russell III on Wednesday ordered the two sides to file a status report Thursday on how talks at resolving the dispute were progressing. In the report, both sides rejected the offer of mediation and opted to take part in arbitration, which will take place Nov. 20, according to the status report.

The dispute comes about a month after the union local, which represents crane mechanics, power mechanics, refrigerator repair mechanics, and operators of container handling equipment, voted to accept a local contract negotiated with the association, as did two other ILA locals in the port. Talks over the port’s local contract had been among a handful that remained ongoing even as most ports on the two coasts concluded theirs.

The local contract approval followed the ratification by rank and file members on Sept. 6 of the six-year master contract covering East and Gulf coast ports raised hopes that it would bring stability to ports on the two coasts until 2024. It paralleled a labor deal for US West Coast ports lasting until 2022, which longshoremen backed in July 2017.

The association’s lawsuit in Baltimore cited sections of the master contract stating that it allowed for “no lockouts or work stoppages by the employers” and, for the union, “there shall be no strikes or work stoppages by the employees.” The contract requires that disputes are handled by an Industry Grievance Committee, consisting of union and employer members, the court papers said.

What triggered the walkout at the Baltimore terminal, which is operated by Ports America Chesapeake, is unclear. Neither side was available for comment, and the complaint filed by the association said only that workers were either absent or stopped work at noon Monday in a “union orchestrated work stoppage.”

Richard Scher, a spokesperson for the Maryland Port Administration, said the terminal ran as normal Monday morning but there was a “labor-management issue” and “labor left early.” That created an “equipment operator shortage,” and as a result, the terminal decided to close, he said.

“Nobody wins when this happens, and we are fortunate that it did not progress any longer than it did,” Scher said, adding that work loading and unloading vessels was unaffected, only work related to trucking cargo in or out.

It’s possible that the source of the dispute may never become public. The reasons behind a wildcat one-day strike on Jan. 29, 2016, in the Port of New York and New Jersey, for example, are still not clear.

The Steamship Trade Association of Baltimore, in a court filing Thursday, said it took 106 minutes that day to service trucks in the port, well above the 76-minute normal turn time, but lower than the 119 minutes it took on Tuesday and Wednesday. The papers said that since the court ordered the workers to return to work “severe issues related to completion of the truck line” meant the terminal had had to close at 9 p.m., instead of the usual 6 p.m.

“If this lack of productivity continues, truckers will no longer enter the terminal,” employers said in the filing. “There are significant vessel operations scheduled this week and into the weekend. Vessels may be turned away from Baltimore as early as Monday.”

The union, however, said in a court filing that it did not have “sufficient information” to confirm the employers’ claims of truck delays. The filing said that the fact that the employer “deviated from past practice concerning soliciting overtime work” may have contributed to delays.

As noted, both sides rejected the offer of mediation and opted to take part in arbitration, which will take place Nov. 20, according to the status report.

The employers also sought an extension of the temporary restraining order issued by the judge.