Since signing of its new six-year contract in 2018, the management of the International Longshoremen’s Agreement, which serves U.S. East and Gulf Coast ports, has vowed to increase container moves to over 30 moves an hour, and perhaps even higher in some ports. Speeding up fluidity to such a degree, would mean that the production rate “far better than any robot or equipment would” be able to attain, said an ILA management.  Their goal is an agreement that spares cargo interests an experience such as the one they endured during the epic 2012-13 bargaining between the ILA and United States Maritime Alliance. Those negotiations yielded a six-year contract, but only after nearly a year of rocky negotiations and repeated strike threats.

US Offshore Wind: Where Is the Market Heading?
Learn how IFP Corp uses technology to improve operational efficiency and improve margins
END_OF_DOCUMENT_TOKEN_TO_BE_REPLACED

The US-China Trade War: Where Do We Go From Here?
END_OF_DOCUMENT_TOKEN_TO_BE_REPLACED 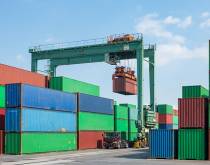 20 Sep 2019
How the US and Canadian governments respond to anti-automation pressure from longshore unions will have ramifications beyond the shaping of public perception, affecting everything from permitting processes to federal grant funding for autonomous equipment upgrades.
MORE »

Daggett re-elected to third term as head of ILA
25 Jul 2019
Harold J. Daggett, who led negotiations for the International Longshoremen’s Association that forged the six-year master contract banning automated terminals from ports on the East and Gulf coasts, was re-elected as the union’s head at its convention Thursday.

LA terminal automation proceeds after permit vote
20 Jun 2019
Amid intense scrutiny from longshore unions throughout North America, the LA harbor commission on Thursday approved a construction permit at APM Terminals Pier 400 that will open the door to a scalable type of automation that could be incorporated into smaller terminal operations in other ports.

Appeals court backs subpoenas in ILA wildcat strike probe
31 May 2019
The Waterfront Commission of New York Harbor has the authority to issue subpoenas to members of the International Longshoremen’s Association in connection with a 2016 wildcat strike, a federal appellate court has ruled.

ILWU Canada, employers reach deal to lift lockout
30 May 2019
Operations at the Port of Vancouver will resume at 4:30 p.m. local time thanks to a tentative new labor agreement between the BCMEA and ILWU Canada.

NY-NJ port moves to improve weekend productivity
09 May 2019
The Port of New York and New Jersey and other ports along the Gulf and East coasts are looking at how to reduce the cost and productivity loss that occurs when longshoremen hired for the weekend are unable to work due to vessel delays.

Automation plans expose rising ILWU tensions
12 Mar 2019
US West Coast terminal operators see ILWU resistance to the deployment of automated yard equipment at APM Terminals Pier 400 in Los Angeles as an end-run around its own contract, which not only allows for automation but states dockworkers “will not interfere with implementation.”

New ILA system aims to boost NY-NJ port performance
04 Mar 2019
Under the new program, ILA gangs will be responsible for increasing their productivity by about one move per hour each year, and teams that don't meet their goals will face additional reviews or even be removed from rotation.

Philadelphia ILA contract grants six years of stability
21 Dec 2018
The agreement comes three-and-a-half months after ILA members on both coasts resoundingly ratified a six-year master agreement to replace the one that expired Sept. 30.

Baltimore walkout came just two months after ILA pact
02 Nov 2018
What triggered the walkout in the Baltimore terminal, which is operated by Ports America Chesapeake, is unclear, but the job action is a reminder that although the signing of the six-year master contract was seen as a harbinger of stability along the two coasts, disputes over local issues and actions can intervene.

Philadelphia ILA rejects remote reefer monitoring plan
25 Oct 2018
At issue is an effort by port employers to have deskbound longshoremen monitor the temperature of each reefer twice a day to ensure that it is at the correct temperature, instead of longshoremen physically walking up to each box, checking, and documenting the temperature on an iPad.

ILA raises automation concerns anew with conference boycott
08 Oct 2018
The International Longshoremen’s Association’s boycott of the 44th Congress of the International Transport Workers’ Federation, which begins Sunday, provides additional evidence that the introduction of further automation will not be a quick and simple process.

ILA contract deal ensures US-wide labor peace until 2022
07 Sep 2018
The deal removes the need for a new contract — the biggest source of labor disruptions, on both East and Gulf coasts — until at least 2024. It parallels a labor deal for US West Coast ports lasting until 2022. Longshoremen backed that deal, a five-year extension of the last contract, in July 2017.

ILA votes next month on US East/Gulf coast master contract
30 Aug 2018
The deal, if approved by a majority of the International Longshoremen's Association members, would ensure labor peace on both East and Gulf coasts until at least 2024.

ILA contract approval outlook brightens on NY-NJ local vote
10 Jul 2018
The East Coast’s largest port, with the most complex negotiations, has reached an agreement. The International Longshoremen's Association wants all such local agreements to be completed before the master contract that covers the ports on both coasts can be ratified.

ILA-USMX reach tentative six-year US East Coast, Gulf Coast agreement
06 Jun 2018
An agreement between the International Longshoremen's Association and United States Maritime Alliance removes a great deal of uncertainty for shippers that send cargo through East Coast and Gulf Coast ports, and should spare them the need to take precautionary measures to prepare for a possible strike.

Judge halts New Jersey effort to dissolve Waterfront Commission
04 Jun 2018
Some shippers that send cargo through the Port of New York and New Jersey may take comfort from a federal judge’s ruling that the Waterfront Commission of New York Harbor will continue to fight crime and oversee hiring in the port. Other shippers may be concerned that commission’s activities will continue, and hurt hiring and efficiency.

ILA-USMX gear up for talks on six-year contract
11 May 2018
Negotiators from the ILA and USMX will try to reach an agreement on local labor agreements, so that talks next month in Florida can focus on the six-year, coastwide deal.

ILA, USMX plan June meetings aimed at contract deal
12 Apr 2018
The International Longshoremen's Association East Coast and Gulf Coast employer representatives will meet June 5 through 7 in hopes of wrapping up the master and local contracts in advance of the current agreement’s Sept. 30 expiration.

ILA, USMX to resume contract talks
09 Mar 2018
Although the International Longshoremen's Association has not had a coastwide strike since 1977, beneficial cargo owners are anxious to have a new agreement in place.