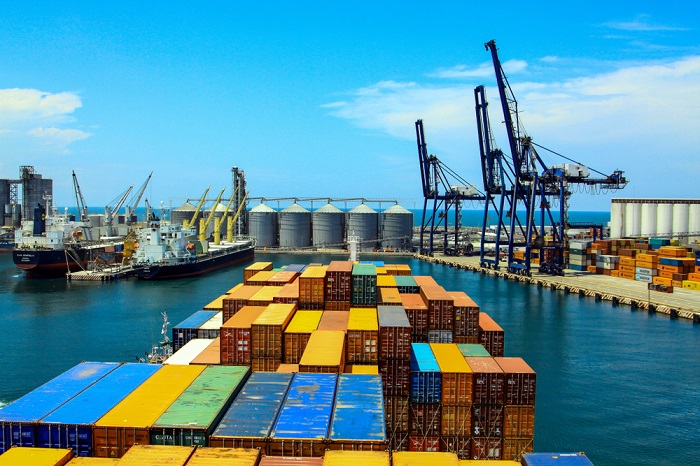 The Veracruz expansion is the most prominent of 25 port upgrades planned by the Mexican government, at a cost of $5 billion in private and public money. (Above: A ship enters the port of Veracruz.) Photo credit: Shutterstock.com.

Much-needed container capacity coming in the spring to the port of Veracruz in the form of a $1.5 billion upgrade underscores the potential behind Mexico’s rapid container trade growth. But it also raises questions on whether country-wide container capacity, highways, and railroads are up to the task.

The first phase of the upgrade, a 1.2 million TEU, $450 million container terminal built and operated by Hutchison Ports, will improve the port’s container handling efficiency and solve a shortage of berth space that sparked sporadic vessel congestion and left vessels waiting for more than a day to get into the existing port.

“The main reason behind the expansion, is the growth [in size] of new vessels,” said Francisco Javier Orozco Mendoza, commercial director for Hutchison Ports Mexico. “In the past, we used to accommodate simultaneously two vessels. Now it is not possible, because vessel sizes have grown.”

The Veracruz expansion is the most prominent of 25 port upgrades planned by the Mexican government, at a cost of $5 billion in private and public money, that are designed to provide a maritime system that can cope with the country’s rising cargo volumes and rapidly growing manufacturing sector, especially its auto factories. The Mexican secretary of Communications and Transportation refers to the Veracruz upgrade as the “most import port infrastructure project of the last 100 years.”

The growth of Veracruz, the largest port on Mexico’s Gulf Coast, has been propelled in large part by its proximity to the vast Mexico City population about 400 kilometers (248 miles) away, and the manufacturing sector in central Mexico to the north. Veracruz handles more automobiles than any other Mexican port.

The new terminal will be about the same size as the operator’s existing terminal in the port, but will have a 700-meter (2,296-foot) berth able to handle two mega-ships at once, instead of the one at present, and be 15 meters deep, compared with 13 meters at present. Hutchison said the existing terminal’s berth can take ships of up to 8,500 TEU, and port officials said there is no restriction on vessel size in the new terminal, which can take the largest ships made at present. Hutchison expects to double the terminal’s TEU capacity with further additions within six years.

Later phases of the port expansion include the construction of four other new terminals at the port — the others will handle grain, minerals, liquids, and bulk cargo — that will eventually make Veracruz (Mexico’s second-largest port) larger than the first and third largest ports, Lazaro Cardenas and Manzanillo, combined.

The upgrade involves the construction of an entirely new container terminal, protected by a specially constructed 4.3-kilometer sea wall, to the north of the existing port that will eventually replace Hutchison’s existing terminal.

Hutchison says the new and old terminals will operate simultaneously from the May opening until the existing terminal is closed in November. The operator says that by increasing the number of cranes from five to seven, adding six rubber-tire gantry cranes, and because it has a more efficient terminal footprint. the terminal will boost terminal productivity by 30 percent, from 360 to 468 container movements an hour.

When the second phase of the upgrade is finished, in 2024, the terminal will have a capacity of 2.1 million TEU and a 1,050 meter draft, the operator says.

The existing port’s main problem is the lack of space for vessels to stop in, forcing some to wait up to 36 hours, although the average is 24 hours, said Juan Ignacio Fernandez Carbajal, director general of the administration of the port. Some shippers have reported longer waits, with some ships going to Tuxpan to unload.

“The problem is that there are not enough berths,” Fernandez Carbajal said, adding that the deficiency is exacerbated by the frequency with which ships arrive late. “They have their scheduled [appointment] windows. When they arrive late for their window, another ship is there unloading.”

Additional vessel congestion is created by the surge in vessel arrivals at the weekend, he said. Ocean carriers try to avoid having their vessels loaded or unloaded in the United States on the weekend, where overtime costs are more expensive, he said.

“We have a saturation of containers on Saturdays and Sunday, and then on Monday and Tuesday we have berths that are empty,” he said.

Veracruz handled 754,836 loaded TEU in the first 10 months of October, a 4.7 percent increase on the same period in 2017, with imports accounting for about 60 percent and exports for 40 percent. The total port’s volume increase in the 2018 period trailed the 8 percent rise for the country as a whole. But Veracruz’s volumes increased by 18 percent in 2017, which made the port Mexico’s second-largest by loaded TEU, up from third place.

The port’s berth and vessel congestion problems reflect a small part of the host of challenges and inefficiencies facing the country’s logistics sector as it seeks to position itself as a regional transportation hub. Key among them is the chronic lack of security, with cargo theft and robberies common on both truck and rail. Other difficulties include a tight trucking capacity, which stems in part from a driver shortage, as well as new hours-of-service (HOS) limitations enacted last year. Truckers say that the impact of the HOS rules is enhanced by the fact that the nation’s highways have too few rest stops at which truckers can take a rest.

Whether much cargo will switch to rail, however, is unclear. The railroads, which account for about 10 percent of the cargo moved in Mexico, are dominated by three companies, and any infrastructure upgrades to the system are reliant on private investment.

That system is facing increasing pressure as cargo volumes increase. Loaded cargo volumes through the port system grew by 8 percent — to 4.18 million TEU in the first 10 months of 2018, compared with an 11.8 percent increase in the same period of 2017.

The cargo is handled by an imbalanced port system in which some ports are stretched and others vacant. The port of Tuxpan, which opened a $370 million container terminal in 2016, handled fewer than 4,000 containers in the first 10 months of 2018, at least in part owing to the lack of a near or on-dock rail connection. Little cargo has shifted there from Veracruz, just 200 miles to the south, despite the southern port’s congestion problems.

At the other end of the scale, volumes through the nation’s largest port, Manzanillo, grew by 8 percent to 1.82 million in the first 10 months of the year. That’s left the port operating at its limit, according to a report released in September by the Mexican Navy Institute for Strategic Research.

“The capacity of Manzanillo is literally saturated,” the report said, with some ships waiting a week to enter the port before they can get a berth on which to unload. One problem, mentioned by users, is the lack of container space inside the port, and the congestion and difficulty of removing cargo from the port due to the necessity for trucks to go through the center of the city of Manzanillo.